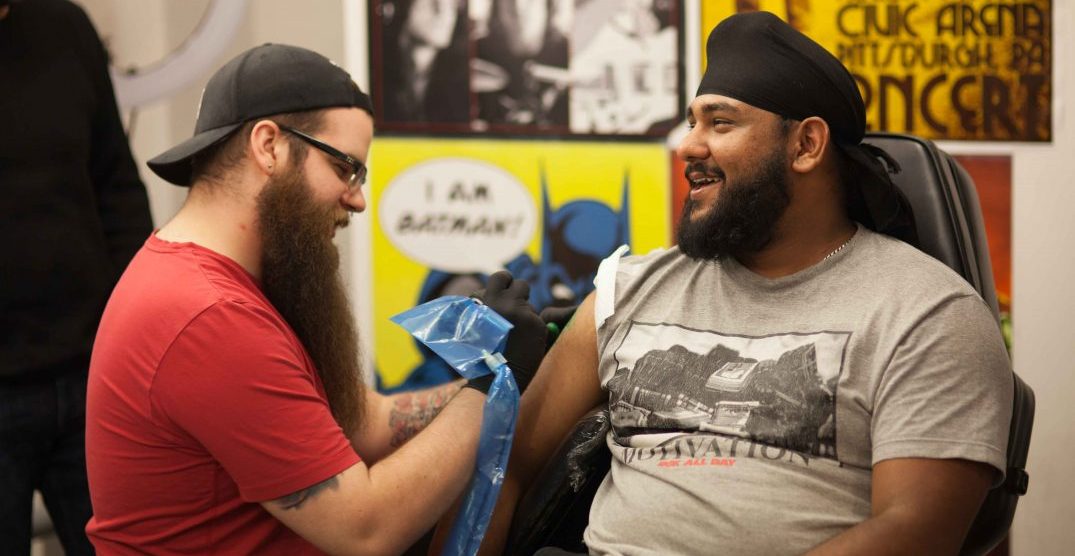 In honour of National Tattoo Day (July 17), we ventured to one of the best-known tattoo institutions in Toronto to get a peek at what an average day looks like for the crew at Chronic Ink.

Beginning as a kiosk inside Pacific Mall over 10 years ago, Chronic Ink has since expanded to five locations including one outside of Ontario, located in Vancouver’s Kitsilano neighbourhood. The Mississauga, Ontario location just opened a week ago at Square One Shopping Centre, adding to the roster of spots which employs over 100 people in total, over 50 of them being artists.

The spacious flagship operation at Yonge and Gerrard hosts 14 chairs. Inside there are also various private rooms, a back workspace for the digital team, a boatload of art collages, large-scale paintings and photographs, communal desk space, retro figurines, a kitchen, and a lot different types of people buzzing, quite literally. They have a dedicated flash tattoo room (ask for Sara) that assists about 120 people a month, too.

“My Saturdays are back-to-back-to-back. On normal days I’ll see about five to six clients and on crazy days more like 13 people. That’s why I make it like this home base for me,” says Sara.

Tattoo flash is ready-made hand-drawn art and designs that are ready to ink immediately or can be slightly modified to the client’s specifications by their tattoo artist. And these are custom designed and pretty specific to the artist’s style.

You can browse them online, pay a deposit, and then book. 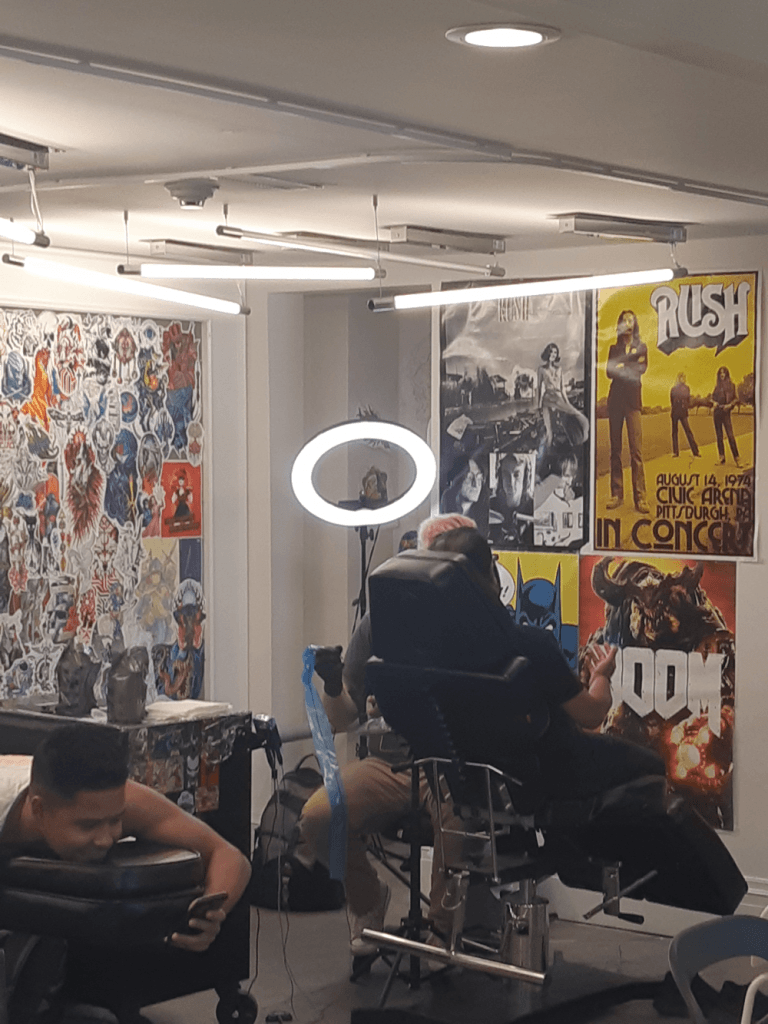 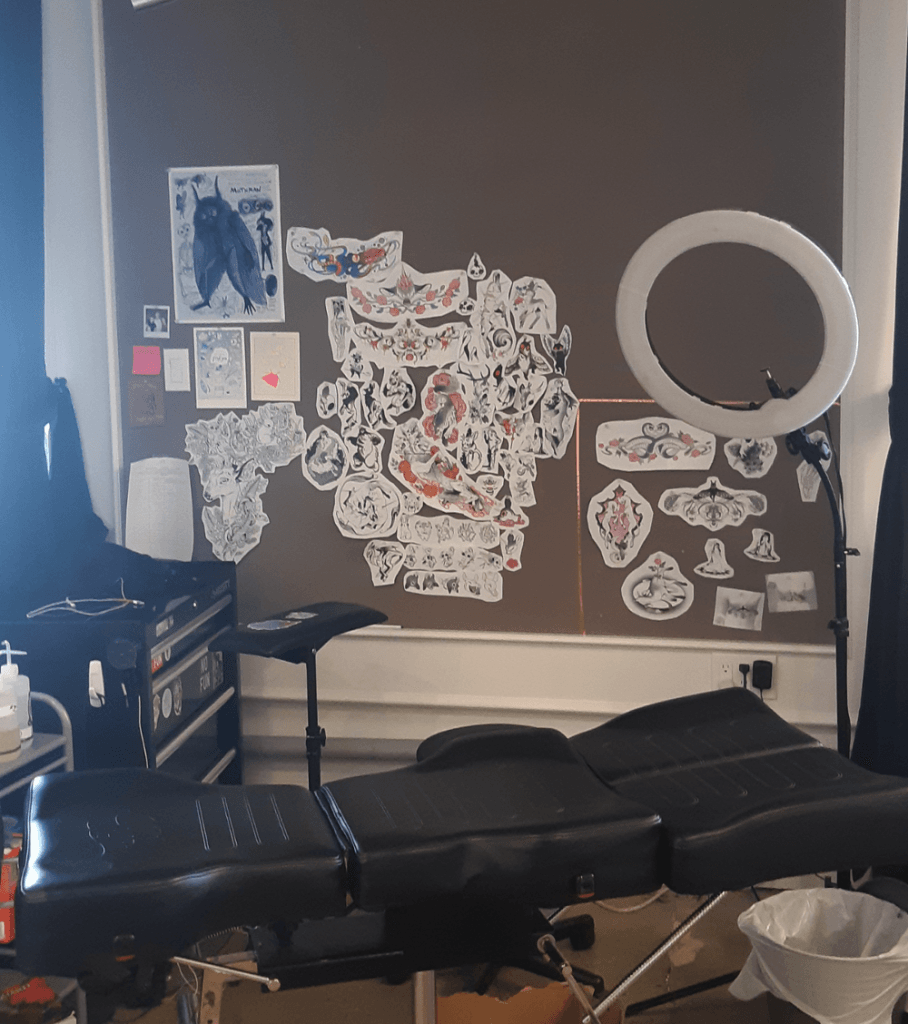 Artists are approved mainly based on their portfolio and typically have been tattooing for at least a year if not more. However, as told by Teddy who runs their social media and general VJ duties for the company, “some artists have come in that haven’t even drawn before.” He stresses the business is big on apprentices, collaboration, and asking for guidance from other artists. They also thrive on the custom aspect.

“We really pride ourselves on being a custom tattoo place where people come in and can talk about their vision and work with an artist to get that vision out as much as possible,” he says.

Two things they don’t do are face tattoos and tattooing anyone who is breastfeeding or pregnant.

“There is no scientific evidence that tattooing people who are pregnant or breastfeeding is bad, but we just don’t want to take the risk,” explains Madison who manages day-to-day operations.

They also will not work on someone who is intoxicated, because blood thins when drinking alcohol. This means people are more prone to bleeding out and it is harder for the artist to achieve the results, adds Madison.

They advise clients to eat three hours before coming in. Many bring in snacks to eat while getting work done, especially if it’s a full day session. A full day session is seven hours. Depending on what’s getting done it could take as little as an hour to lay on the ink, though.

So, food helps. Some people bring in their Nintendo DS and play Pokemon. And some just sit there — because it’s fine to do nothing.

They caution against getting tattoos on fingers, feet, and hands because each will need a lot of touching up and they don’t guarantee touch ups on those kinds of tattoos because they are so prone to fading.

As for pain, they have a tattoo pain map, however, each person answered differently as to what their most painful spot to get a tattoo was. Answers varied from ribs to chest to the back of the head. There was mention of the back calves being super sensitive and buggy because of random muscle twitches. 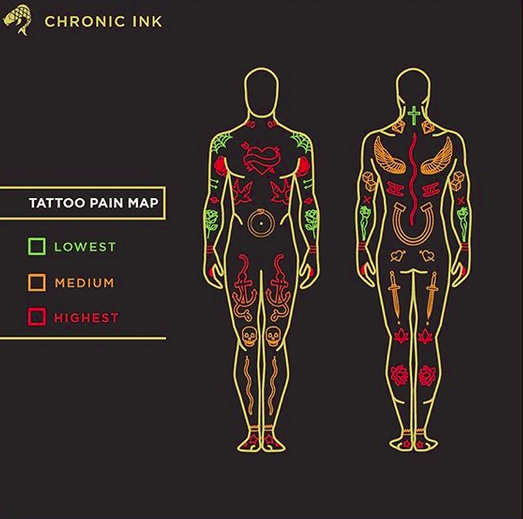 Moving along, Madison explains that colouring changes based on your skin.

“Everyone thinks the ink is just black but when it heals on the skin your skin tone comes out on that to some degree. So if you have a cooler skin tone then your blacks are going to look a bit more blue. If you are on the lighter side you’ll notice more of a green tint,” she says.

It also depends on when someone gets their tattoo, the application of the artist, and how the tattoo is taken care of both as they are healing as well as later on.

“A lot of people think that aftercare for the tattoo ends at the three week point, but it doesn’t really. You have to moisturize your skin and also protect it from the sun if you want to have the longevity,” explains Madison.

A common question put to tattoo artists is if they have inked themselves before, and Madison says most artists tattoo themselves first before anyone else.

While totally up to the client, generally speaking if you are doing one big cohesive piece then sticking to one artist is safe. Those more interested in being a “collector” and having various bits and styles may want to mix it up and have work of multiple artists on their skin.

Fine line tattoo art is one of the biggest trends as of late, according to the CI crew.

Some are choosing to do wedding tattoos instead of getting rings on their fingers.

People also like to have fun joke tattoos. For example, one client with the last name Pringle put a chip on his shoulder. An actual chip tattoo. WILD.

Group tattooing is a thing and Chronic Ink accommodates this. Siblings are also keen to bond through shared tattoos and come in to get that done.

Could you sit your parents down and tell them you were dropping out of school to chase your dream? That’s exactly what @rissa_tattoos did. – Clarissa is one of the artists that will be a part of our Vancouver family. She spent the last year in Toronto with the @chronicink team doing her apprenticeship and is now #ComingHome. We’re super excited to have Clarissa as a part of our family. Her love for art and tireless work ethic make her the perfect addition to the team. – 📹: @petedaly_media. – #vancouver #torontotattoo #torontotattoos #customtattoo #tattoo #tattoos #art #instaart #tattooideas #tattoosocial #design #inkstinctsubmission #tattoodo #inspiredinktattoo #tattoomobile #toronto #neotrad #neotraditional

A minimum of $80 is what you’re looking at if you want something like a dot, a semicolon, or basically something super tiny. Then the pricing goes up; a sleeve or half-sleeve is hourly priced.

What about removing a tattoo?

“It’s pretty stress free and inexpensive,” says Madison. “It usually takes like 30 minutes so you could do it on your lunch break if you wish. The cost ranges from $90 to $350 per session depending on size pieces.”