On Wednesday, installations went onto the floor of SkyTrain platforms around Vancouver that included the shocking image of body outlines on the ground.

Placed by New York Times Best-Selling Author, Napoleon Gomez, the installation was meant to bring attention to the explosion that led to a collapse at the Pasta de Conchos coalmine in Mexico, trapping 65 men inside, 8 years ago on February 19, 2006. Of the 65 miners, only two bodies were recovered. The rest remain buried underground to this day. 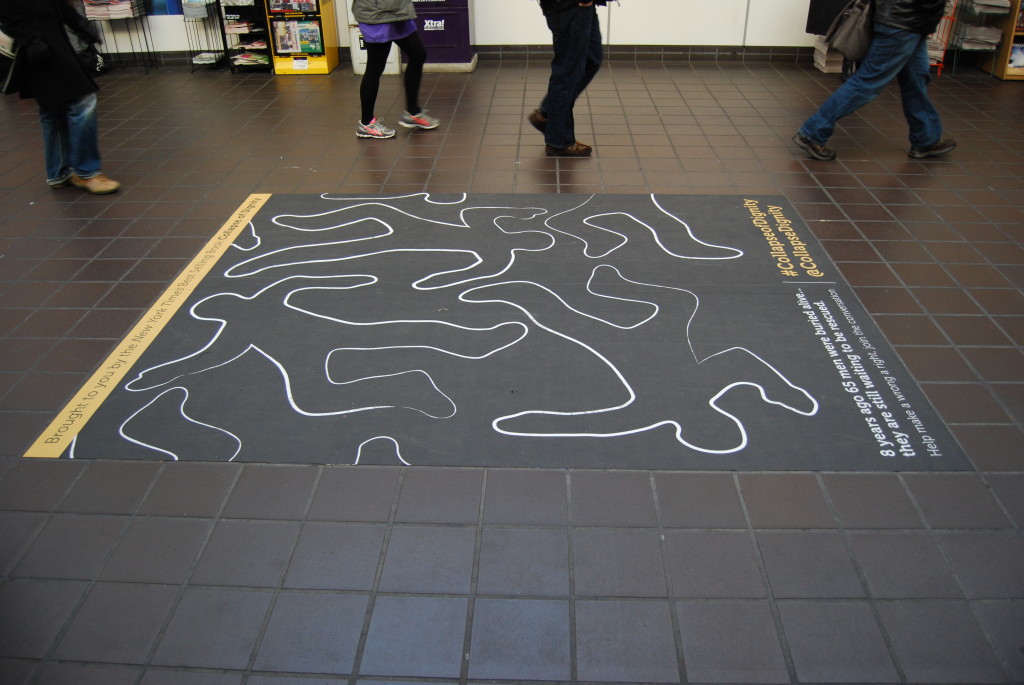 At the time of the disaster in Mexico, Gomez served as the head of the labour union that represented the workers. The hours and days following the collapse were a flurry of panic and desperation as Gomez and his team called for the search and rescue of the miners, but to no avail.

His calls for immediate rescue and retribution would see fingers pointed at the Multinational Corporation who controlled the mine, Grupo Mexico, and ultimately then-President of Mexico, Vicente Fox. Gomez had a major battle on his hands, one that eventually saw him leave his homeland to find refuge in Vancouver and tremendous international solidarity from progressive labour and human rights activists.

A stark contrast to the highly televised rescue of 33 miners in Chile in 2010, the disaster in Mexico and the subsequent lack of an attempt to recover the bodies of those lost miners has flown under the radar for the average North American. For Gomez the silence and lack of awareness felt deafening. This year, to mark the anniversary of the tragedy, he was compelled to even bolder action.

“For the past eight years I have worked to keep the story of Pasta de Conchos alive and raise awareness and support for the families of the miners,” Gomez explained. “Across Canada I have been able to share a vision for better relations between governments, corporations and workers, and I feel the momentum building. This year, to mark the anniversary of the mine collapse, I really wanted to do something to spark interest with the average person.”

In 2013, Gomez published the story in his book Collapse of Dignity, which would go on to become a New York Times Best-Seller.

Since then, he has toured Canada as a speaker, lecturer and commentator on the future of labour rights and a vision for a more positive and equal relationship between workers, companies and governments. To mark the anniversary, 100 per cent of the proceeds of the sale of the books, for the next month, will go directly to the families of the lost miners.

“This terrible tragedy in Mexico could have been avoided had the right safety measures been in place. Similar disasters have happened at the hands of corporations here in Canada and elsewhere,” Gomez said. “I have confidence that the Canadian public is ready to ask questions, ready to demand a better way, better standards, and also willing to look at how their choices and way of life will impact the continuation of workplace issues across our borders. The first step in making a difference is to educate and inform yourself.”