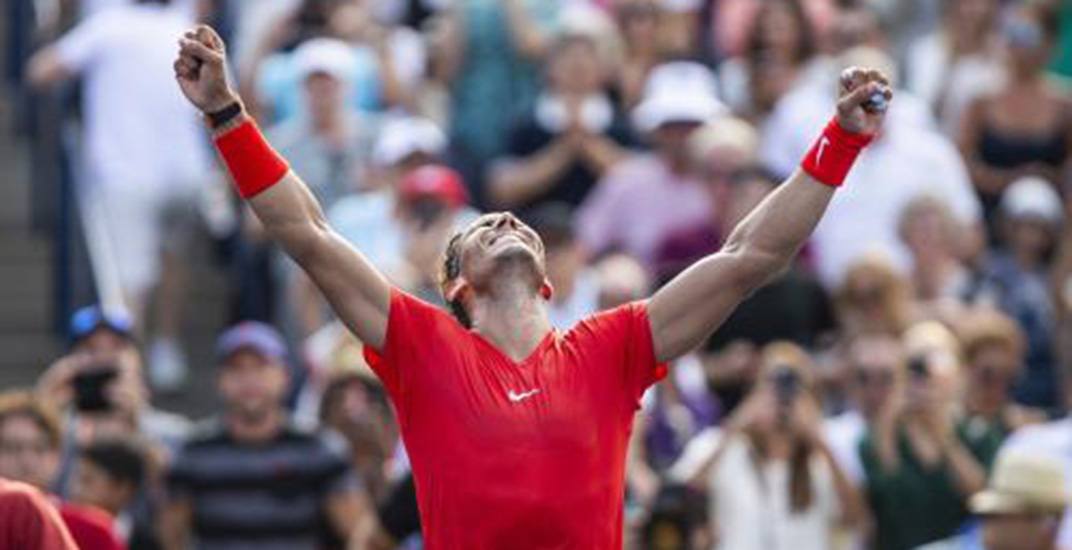 The kid beat four top-10 players to make it to the Rogers Cup final. Then on Sunday, on his 20th birthday, Stefanos Tsitsipas faced an entirely different challenge.

“The patience that Rafa has is amazing. He never cracks,” said Tsitsipas of the ordeal of playing Rafael Nadal after the match.

“He will grab you like a bulldog and he will always make you suffer on the court,” Tsitsipas continued.

For Nadal, the win in Toronto, his fourth Rogers Cup, was a record 33rd Masters 1000 title (Novak Djokovic and Roger Federer are next on the list with 30 and 27 respectively).

After taking a routine 6-2 first set, the 17-time Grand Slam champion was on his way to dominating his way through the next one as well.

Nadal broke Tsitsipas in the first game of the second set, and he had only lost three points on serve when he served for the match at 5-4.

“Then arrived the moment that I had to close the match, and I played a horrible game, no?” Nadal said afterwards. “I got a little bit tight and nervous.”

Nadal went down 15-40 after throwing in a double fault, giving Tsitsipas two shots at breaking back.

“I get nervous,” explained Nadal. “I am completely human person. I get nervous and I miss it. And that’s it.”

Tsitsipas broke and forced a second-set tiebreaker, where Nadal steadied the ship and elevated his game once again.

The 20-year-old continued talking about Nadal’s resiliency: “[Rafa] was, you know, normal like all of us and he managed to become this beast, this monster that he is today.”

“That’s how you feel when you play against him. So I need to work much more and hopefully I can reach his level one day.”

After his loss in the final, I asked Tsitsipas if he watched Denis Shapovalov’s run to the semi-final last year and if it inspired him.

“It inspired me so much I was dreaming of being in his place,” said Tsitsipas.

“I remember I was watching from the television in Portoroz in the Challenger that I was playing that week, and I was watching his matches every single day.”

“It was so inspirational to see him beat those guys (Juan Martin Del Potro and Nadal). I mean, to me, it seemed like completely out of any world what he was doing on the court.”

“Now I understand that it is more simple and less complicated than it looks. So I just had to believe in myself.”

Nadal had plenty of positives to say about his opponent’s game as well: “[Tsitsipas] has everything. He has a very complete game. Big serve. Great shots from the baseline. He’s brave. He’s young,” said the Spaniard.

“If he’s able to keep improving, and the normal thing is he will, he will be fighting for the most important titles of the world of tennis.”