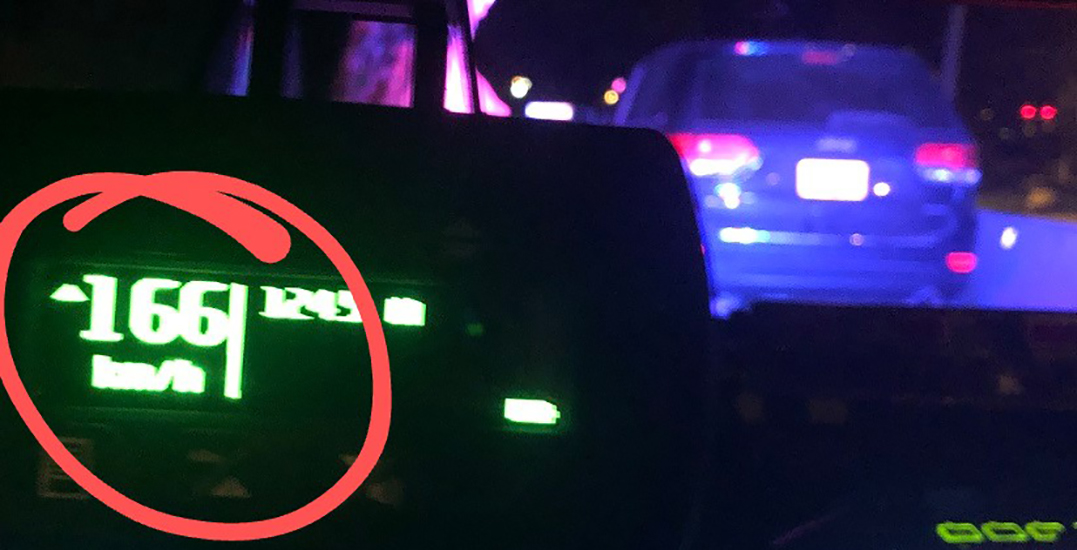 A "N" driver had their vehicle impounded on Wednesday after driving double the speed limit in an 80 km/h zone.

An “N” driver received an expensive lesson on Wednesday evening about refraining from speeding.

The North Vancouver RCMP says that at approximately 9:30 pm, a vehicle was caught going approximately 166 km/h on the Upper Levels Highway — more than twice the 80 km/h speed limit.

The driver was issued a ticket for excessive speeding and had their vehicle impounded.

Sgt. Peter DeVries, North Vancouver RCMP spokesperson, says that with “a little bit of anecdotal math,” the driver is facing over $1,000 in both tickets and fees combined.

The driver’s ticket includes a $483 infraction for excessive speeding over 60 km/h, as well as $109 for driving contrary to restrictions — because they weren’t displaying their “N.”

“The tow bill tends to be over $100 and the vehicle is impounded for seven days, which also comes with a storage fee,” DeVries tells Daily Hive in an interview. “Plus for new drivers who get these kinds of tickets, there are very often insurance premiums that are added to ICBC costs.”

Excessive speeding also carries three points towards ICBC’s Driver Risk Premium (DRP). The DRP for excessive speed ranges from $461 to $1,627 and is billed even if a driver doesn’t own or insure a vehicle.

“It’s gonna be more than $1,000 for this person by my estimation,” says DeVries.

This "N" driver was stopped by a #NorthVan traffic unit last night on the #UpperLevels. Speed limit is 80 km/h.

Drivers take note: the rules are real & the penalties are serious: tickets, tow, 7-day impound, insurance points…$1000 and counting. AND no road test for a while! pic.twitter.com/gqiJjYLPzb