The latest musical to land in Vancouver is Monty Python’s Spamalot, loosely based on the 1975 British hit comedy, Monty Python and the Holy Grail.

Like many theatregoers, I am not Python devotee; having never seen the movie or was even born when the cult series was still on air. Nevertheless, Spamalot proves that you do not need to be an existing fan to enjoy the glittery costumes, flawless choreography and annoyingly-infectious music. The cast seem to enjoy the show as much as their audience, showcasing some great laughs and camaraderie to the cheering full-house theatre.

After being instructed to seek the Holy Grail by God, King Arthur and his knights must venture on a bonkers journey of challenges, battle and a giant wooden rabbit!

Musical highlights include a cheery rendition of Always Look on The Bright Side of Life; if that doesn’t put a smile on your face then not even a dry year in Vancouver will. I also particularly enjoyed the Vegas-themed extravaganza Knights of the Round Table / The Song That Goes Like This by the vocally talented Lady of the Lake, complete with showgirls and Cher-inspired sparkle. 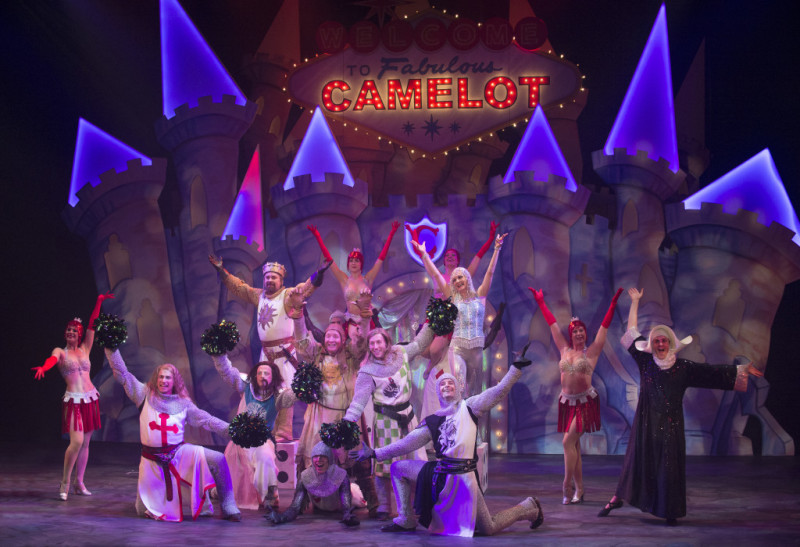 The cast of Monty Python’s Spamalot

The dialogue was somewhat difficult to follow at times, yet Spam-addict hysterics began before the actors even spoke. The pace of the show is fast, vibrant, seamless and is enough to entertain those that are not familiar with or following the plot.

Monty Python’s Spamalot has been an enormous success across generations on both sides of the Atlantic, going as far as to win the prestigious Best Musical Award at the 2005 Tony’s. The latest residence is sure to please new and existing Canadian fans who will be humming the anthems through to the summer.