“There is such an amazing power behind music,” Patrick Zulinov, co-founder and organizer of the Music Therapy Ride (MTR), says. “My mother is a great example of it. She’s had strokes and she can’t speak very well, but she can sing any song. It’s a different part of your brain that works.”

Music’s effect upon us is undeniable: it lifts us, it inspires us and, often, it can help heal us. In 2001, the former SHORE 104.3 FM host, along with some of his friends in the local music industry, put together the annual motorcycle ride in a bid to raise awareness and money for the wonderful, yet much overlooked, act of music therapy. With proceeds administered by the Music Therapy Association of Canada, the charity event has successfully contributed over $600,000 to community-based music therapy services in British Columbia.

Therapeutic uses for music go back to ancient times, from references in biblical passages to sound rituals in early Egyptian civilizations to tribal drumming and chanting in Aboriginal cultures. As one of the most basic means of intrinsic human expression, research has shown that the brain’s response to music is neurologically unique, making the targeting of non-musical cognitive functions quite effective during music therapy treatments.

Though amazingly not funded by the government, music therapists can help promote, maintain and restore a patient’s mental, physical, emotional and spiritual well-being through various techniques that range from playing an instrument to writing a song to simply just listening. Zulinov regards these unsung heroes with great admiration.

“I’ve been fortunate to go into the hospitals and just sit in the corner and watch what they do sometimes,” he says. “Little kids that don’t want to do their physiotherapy because they’re three years old and they don’t understand what it’s going to do for them; but you put a xylophone in front of them, or a drum, and they’re beating away and getting their arms moving. I’m in awe of them [music therapists]—they are the true superstars.”

With help from the money raised from the charity ride, the MTR has funded the creation of a unique, mobile musical unit named Bandwagon. Equipped with a full recording studio program, a microphone and a variety of instruments including a keyboard and a guitar, Bandwagon can roll up to bedsides and provide an engaging, artistic outlet for a patient who may be confined to the parameters of their room. “They need something to do that’s creative, something that they can do to express themselves,” Zulinov explains. “Sometimes, it’s the terminally ill who would like to leave a legacy behind for their parents or their families.” This was such the case with the late Megan McNeil.

A young cancer patient who partly served as an inspiration for the creation of Bandwagon, McNeil loved music and looked forward to her music therapy sessions. Her song, “The Will to Survive,” was written as a tribute to the fellow cancer-fighting children she’d met in the hospital and was so moving that it garnered the attention of legendary music producer Garth Richardson (Red Hot Chili Peppers, Rage Against the Machine). The beautiful track is available on iTunes and has been played on radio stations nationwide. 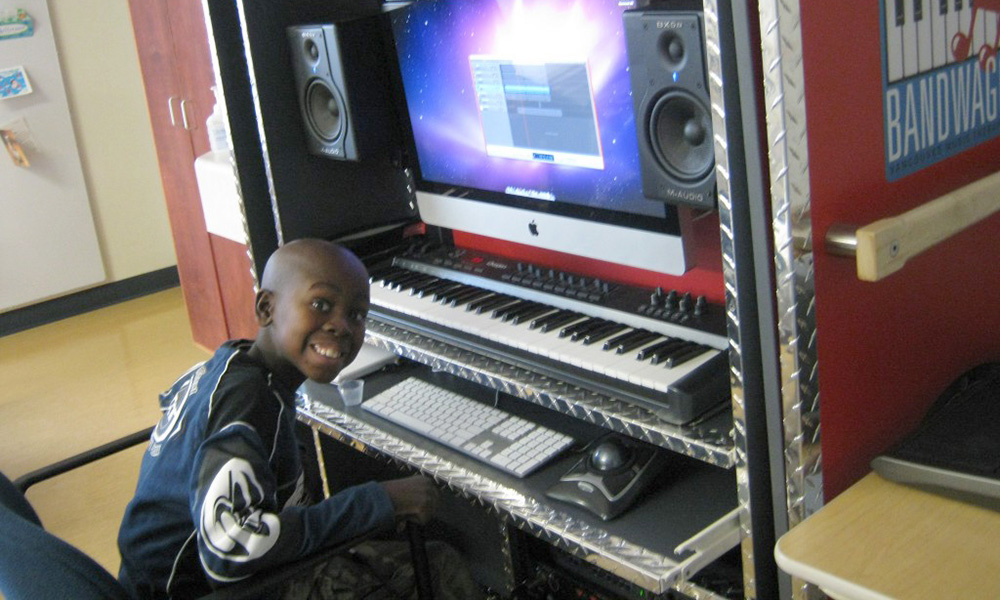 There are now currently two functioning Bandwagons: the first is permanently stationed in Children’s Hospital and the second travels to various clinical settings, including community hospitals, complex care residential homes and addiction treatment centres. A third is to be built with the funds gained from this year’s MTR.

On September 13, the Vancouver Police Department’s Motorcycle Drill Team will lead motorcycle enthusiasts and drivers alike from Vancouver to Whistler for the MTR’s 13th annual ride. Featuring an auction, a barbeque and performances by The Road Hammers and The Lion The Bear The Fox, the event is sure to bring joy to all involved, both on and off the road. “We’ve got a lot of kind supporters,” Zulinov says. “Every little bit helps. It’s inspiring—just celebrating music and the goodness that it brings to people. It’s like a big group hug.”

Register for the Music Therapy Ride on their website.