There is more to music that what we hear. Music enriches us, music communicates to us and music has healing powers. March is music therapy awareness month. How much do you know about music therapy and local initiatives? The upcoming Steam Whistle Unsigned Series on April 3 is a fund raiser for The Music Heals Charitable Foundation, a locally run initiative that raises awareness and support for music therapy services across the country.

“Music therapy covers a lot of things. We wanted to make sure during our first year that we covered as equally wide range of care that we possibly could,” said Brandt. “Our goal is to increase access, finding existing programs, and positively reinforcing the facilities that are already supporting music therapy.”

As a foundation, Music Heals cannot run its own programs, but since its establishment, it has added much needed hours to music therapy programs. Last year, a donation of $15,000 to the Langley Lodge funded an additional day of music therapy each week for a full year, expanding their program by 50 per cent.

“The fact that there’s no government funding, it really does take on-going fundraising within the facility or private donors to facilitate having music therapy,” said Brandt. In the Greater Vancouver area, there are several ways to help Music Heals. The upcoming Steam Whistle Unsigned series on April 3 at the Biltmore Cabaret is a fundraiser for Music Heals, with all show proceeds going to the foundation. As well, on June 22, Music Heals will be part of the Scotiabank Half-Marathon and 5K event taking place in Vancouver.

“We’ve got some pretty cool celebrity runners. Ryan from Mother Mother, Hannah Georgas, Johnny from Art of Dying, couple of DJ from The Peak will all be running on the Music Heals team so people can sponsor the run or join the run,” Brandt said. And until the end of March, all Blenz locations are accepting donations of used iPods for Music Heals. “Anyone who brings in a working iPod will get a $5 gift card from Blenz. They have been so supportive.”

Brandt explained that although the iPod itself is not music therapy, it is a tool music therapists can use with their patients. He said the goal of the iPod drive is to also raise awareness about music therapy and Music Heals. 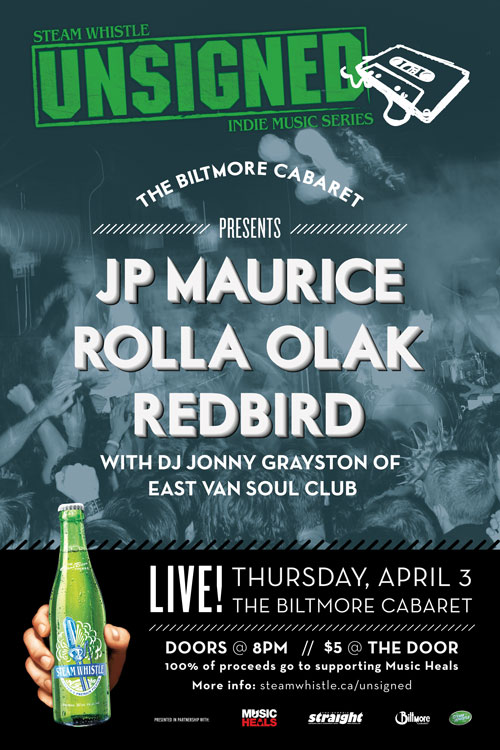 The Unsigned Series at the Biltmore features JP Maurice, Rolla Olak and Redbird, with DJ Jonny Grayston of East Van Soul Club. The $5 tickets are available at the door, proceeds supporting Music Heals.