An unidentified man described as a “suspected illegal border crosser” and “murder suspect” was fatally shot Thursday afternoon by a U.S. Border Patrol agent near the Sumas border crossing.

The victim had allegedly assaulted the agent during a confrontation on Kneuman Road, according to a press release, reports the Bellingham Herald.

The Sumas Border Crossing is the U.S. side of the Huntingdon Border Crossing in Abbotsford; Canadians cross via Highway 11, which becomes Washington State Route 9 in the U.S. “The road where the shooting took place is about 300 metres from the U.S.-Canada border,” notes Global BC. 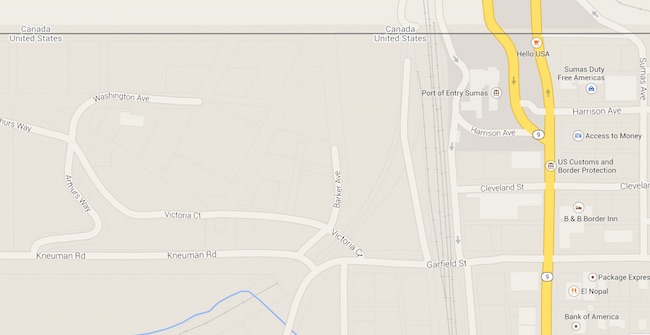 In a press conference held Friday morning, the U.S. Border Patrol said the victim was wanted for murder “out of another jurisdiction,” but declined to state which one.

Despite rumours suggesting the deceased was local murder suspect Daniel Paul, Vancouver Police have said he was not the man shot at Sumas Thursday. Paul remains at large.

“Contrary to media reports, Daniel Paul has not been located in connection with any other ongoing investigation in the United States,” the VPD note in a news release issued Friday afternoon.

The deceased was found with a hatchet in his backpack, said the U.S. Border Patrol.

The shooting was first reported at around 2:45 p.m. Thursday, when a Sumas officer called in indicating shots fired on Kneuman Road. The agent had been hit with pepper spray, but had not been seriously injured in the confrontation, however the deceased had been shot in the head, reports the Herald.

Authorities have not provided information about the man’s nationality or the circumstances of his illegal border crossing.