If you see a new mural at Hastings and Granville, it’s important to understand that it’s the culmination of an artist’s entire career thus far.

Vancouver artist Jenn Brisson was contacted to create the mural by a friend in the Downtown Vancouver Business Improvement Association. Creating the piece on a series of 8 ft by 4 ft wooden panels, over the course of a couple months, Brisson says the opportunity to work on such a large scale was a thrill and a challenge. 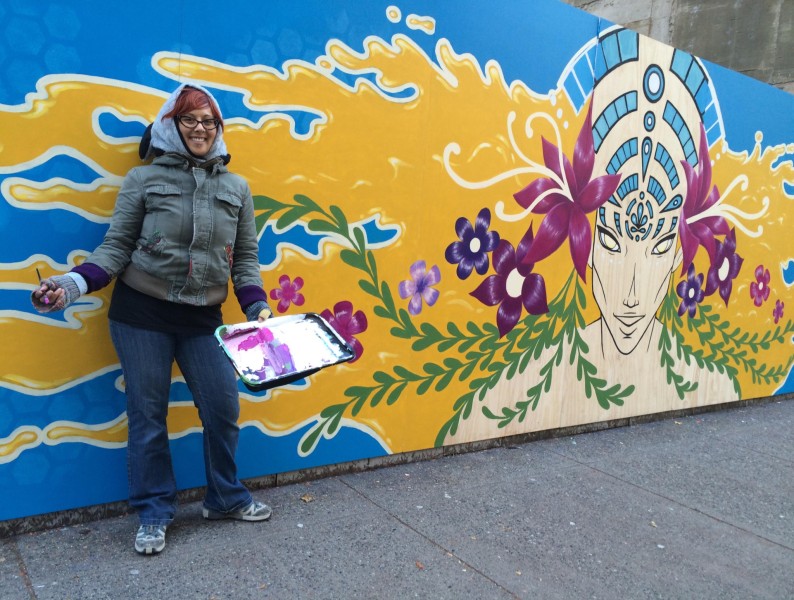 “It’s so incredible,” Brisson told Vancity Buzz. “It’s kind of hard to explain. It was such an interesting process working it, just because it was so big. To see it develop at such a slower pace than normal, part of me was like ‘just don’t think about it too much, keep going, keep going,’ but it was a little therapeutic at the same time.”

Brisson says that while she’s more used to painting smaller projects, having a larger thing to work on for a longer amount of time, while initially intimidating, was extremely gratifying in the end.

“I was working on it for almost two months, and there’s painting there, and just being with my thoughts for such a long period of time, just hoping it’s going to look good in the end,” she says. “Most of the time I see what the painting is going to look like right away, whereas something like this it’s like, I’m only guessing this is going to work out. Just to actually have it so big you can see it across the street, or down the street, and it’s so colourful that it’s like ‘Oh okay. That’s really cool. I did this.'”