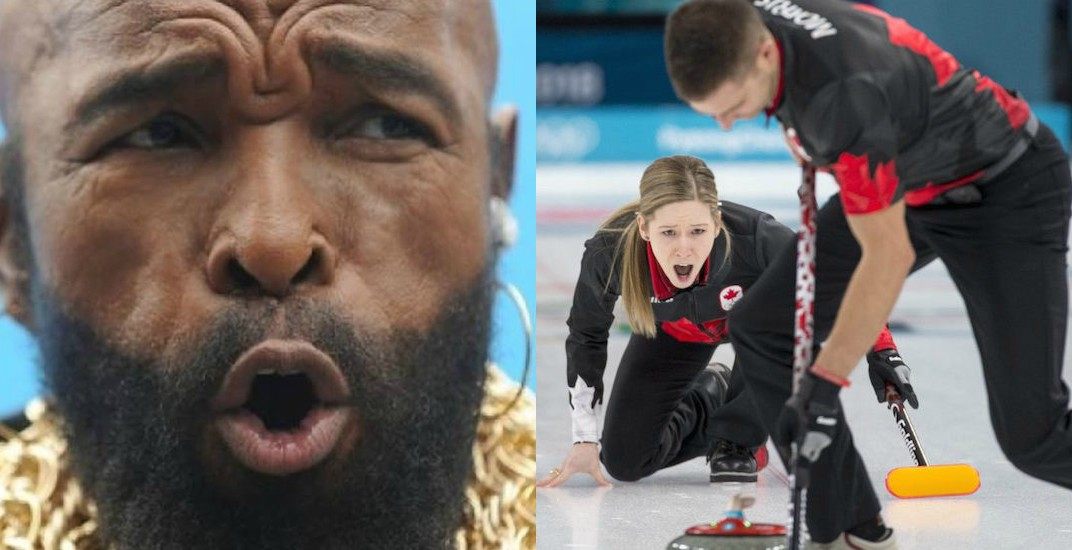 There have been a lot of great moments so far in PyeongChang, but let’s take a second to appreciate the silly side of these historical and momentous sporting events.

Here are some of the funniest things that have happened at the 2018 Winter Olympics.

Mr. T Pities the fool who can’t appreciate a good game of curling.

The 1980s icon tweeted his excitement about his newfound love of the sport in a way that only he knows how.

I am really Pumped watching the Winter Olympics. I am watching events I never thought I would watch before, like curling. You heard me, curling Fool!

Like I said before, Curling is not as easy as it looks. I must be honest with you.. That little broom reminds me of my Swiffer Sweeper! I’m just saying…

In case you weren’t sure how serious the former wrestler was about his dedication for his newfound favourite winter sport, he took a moment to argue his love of curling, and it makes a lot of sense.

I like curling, it’s less wear and tear on the body. I wrestled, boxed, and studied martial arts. I have nothing else to prove. Therefore I choose curling. #curlingiscoolfool

The curlers proved to Mr T that it can, in fact, be dangerous

The mixed doubles curling bronze medal match was briefly interrupted by a Russian athlete who took a tumble.

Usually curling teams have spare players to sub in if anyone gets injured, but injuries in curling aren’t that common.

In mixed doubles, however, there are no extra players waiting at the ready on the bench.

North Korea sent 229 cheerleaders to the Olympics, and their extreme synchronization and sweet tunes were noticeably hilarious.

They move so robotically that your eye almost starts searching the crowd to see if Will Smith is sneaking between the masses of cheerleaders, à la I, Robot, in the clip below.

Will the North Korean cheerleaders at the Olympics affect the sporting world going forward? It actually makes sense to have a cheerleading team in the stands too pic.twitter.com/RR3r5JWLL7

Here’s a look at one of the cheers being led by North Korean Cheerleaders at the 🇰🇷🇰🇵🇨🇭 hockey match. #Olympics2018 pic.twitter.com/a6qAwoRim6

Shaun White was celebrating his first run, and in his impassioned celebration, threw his helmet into the crowd, the way Bautista threw his bat when he hit that famous home run.

Whatever it is you’re doing tomorrow, do it with the confidence of Shaun White lobbing his helmet into the crowd before the end of his FIRST run pic.twitter.com/DbyEuZXa9Z

The thing is, White still needed to complete one more run to actually win the gold medal.

Check out this video of how the Canadian women’s hockey team is getting from the dressing room to the rink on little roller skate attachments.

The goalie even had the perfect theme song to go with the awkward expedition.

So apparently it’s Valentine’s Day….I forgot all about it because I’m at the #Olympics and I’m single. Anyone else out there single and want to be my valentine? 🤷🏼‍♀️ #worthashot

And Olympians did tricks and goofed around

Behind the scenes of the high-pressure Olympic games, some athletes love to have a little bit of fun and not take life too seriously. Swiss Olympic skier Fabian Bösch shared some hilarious videos on his Instagram page of how he and his teammates let loose in PyeongChang.

Here’s another golden one. This is video proof that Olympians always know exactly the right approach to make it to the top.