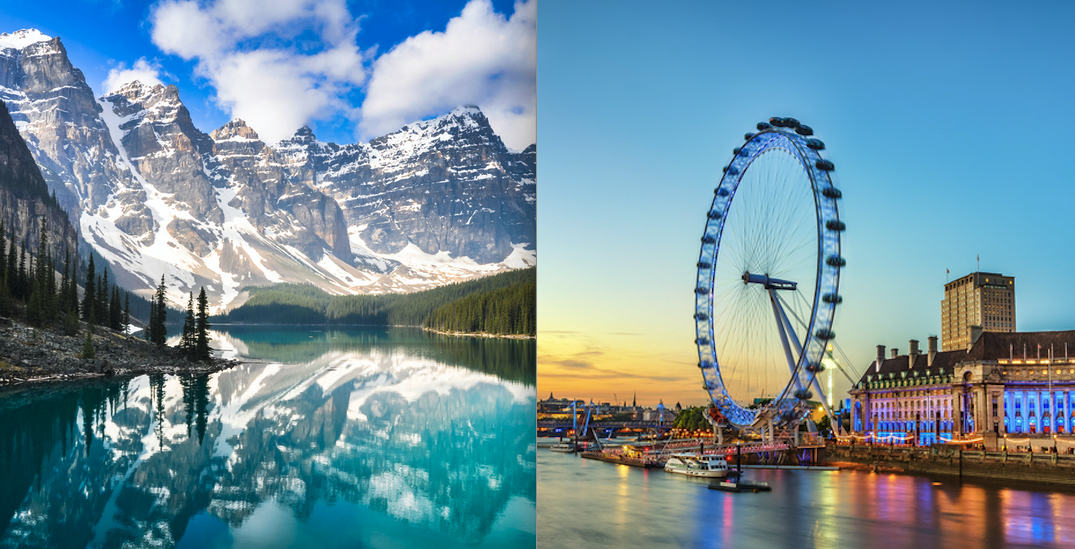 Written for Daily Hive by Robert Collins, a freelancer based in Vancouver.

There are many wonderful reasons for starting a new life in a different country but it comes with facing more than a few cultural differences. How do I know this? I speak from experience: I moved from London to Vancouver over 10-years-ago and the adjustment period has never ended. All of which leads to the ultimate question: which country is better?

In the immortal words of Britain’s Dada-inspired TV host, Harry Hill, there’s only one way to find out, FIGHT.

Bacon, sausage, black pudding (for the fearless diner), fried egg, baked beans, and a slice of fried bread to soak up every drop of fat in the pan. The innate ability to absorb a hangover gives the classic British fry-up (aka the Full English) a certain artery-clogging panache.

However, the ubiquitous presence of eggs benny on every diner menu, along with constant access to maple syrup, gives the edge to the Canadian breakfast. While we’re on the topic, hash browns should be made from potatoes. They are not pre-frozen, reformed triangles of mystery matter. Up your game, Britain.

Every UK ex-pat has heard the jokes about British food. Fair enough, the indigenous cuisine isn’t exactly inspiring, but thanks to years of immigration the UK is today blessed with tremendous restaurants. Sadly, this hasn’t filtered through to weekday lunchtimes, where the vast majority of office workers suffer through the daily ordeal of the pre-packaged triangular sandwich. So what that your favourite cheap and cheerful sushi place in Vancouver isn’t as good as it used to be — be grateful it’s there.

Canadians eat dinner early. Crazy early. It makes zero sense to international visitors that restaurants close their doors at 9 pm. At the same time, as long as you don’t mind dining before you’re actually hungry, there are restaurants here to rival anywhere in the UK.

Whether you’re committed to ultra-hipster single-origin specialists or swear by Timmy’s, there’s Canadian comfort to be taken from the knowledge that you’re never far from a decent cup of joe.

In the UK, you can traverse towns across the country encountering nothing but overpriced beyond-bland chains like Costa, Caffee Nero, and (of course) Starbucks.

There’s a reason coffee is so popular in Canada. As every Brit will tell you, Canadian tea is almost always served anaemically weak. Tea should not taste as a lone leaf has fallen into a puddle. If a tea bag has a string attached to it, you’ll need two of them in each cup to satisfy a Brit.

On a side note, if you do ever offer a Brit a tea, there’s no need to start listing all the flavours available (Earl Grey, Rooibos, Peppermint, ad infinitum). The most boring, traditional tea you have will be absolutely fine.

There is a simple elegance to purchasing a beverage in a British pub. Approach bar. Order drink. Pay for drink. Drink is provided. Total time taken: 30-60 seconds.

Contrast this system with the Canadian approach.

“How many? Let me show you to your table.” Five minutes pass.
“Hi, how are you all doing? Can I tell you about our specials tonight?”

Order drinks. Server reports the order back to the bartender who starts preparing said beverages. Server goes to deal with other tables. Beverages (now poured) sit on the bar gradually warming. Server brings them to the table. The following communication occurs soon after.

“How are you getting along with those? Can I get you another?”

Dependant on the reply, the above process is either repeated or the server will go away to return with a bill. They will then go away (again!) before returning with change or a credit card terminal. Total time taken: Way too freakin’ long.

Smokers in the UK have traditionally bought their weed from a chav outside Londis (ask your British buds) rather than a pristine cannabis shop offering polite advice about strains and effects. If that wasn’t enough, British caners have been rolling their joints for generations with a mix of weed and cigarette tobacco. Whatever the logic behind this maybe, when you’re blessed with weed of the calibre we take for granted, it’s totally bogus. What next, mixing Cabernet Sauvignon with PBR?

The only area of weed culture where the UK has the advantage is its wonderful lexicon. In Canada you get high. In the UK you can be caned, mashed, mangled, battered, buckled, and munted.

Weed isn’t the only area of British culture where a large vocabulary elevates the ordinary into the evocative. Even the rough and readiest Canadian will politely excuse themselves to go to the bathroom. Brits have the luxury of heading to the toilet, the lav, the loo, the privy, the bog, the khazi, and even the Gary Glitter.

The varied sporting menu of Canadian life (including everything borrowed from our neighbours in the south) makes a refreshing change to the UK’s endless diet of soccer and, even worse, the horse-tranquillizing sedative of snooker.

We may be fair-weather fans in Vancouver, but the relaxed joy of knowing that We Are All Canucks marks a refreshing change to the understanding that professing a fondness for the wrong football team at the wrong time could seriously damage your health.

As an aside, why do British people get so upset by the word soccer? It’s actually 19th Century English public school slang, used to differentiate Association Football, ‘soccer,’ from Rugby Football, ‘rugger.’ Historical facts!

Sure, taking transit in any Canadian city comes with wait-times and breakdowns, but it doesn’t compare with the nightmare facing the five million Londoners packed into the Underground on a daily basis. As an added frisson of discomfort, the vast majority of these trains have no air conditioning.

With mountains, oceans, and forests, nothing comes close to Canada’s natural landscapes. Turn on your kitchen tap. The water is nectar. I can’t speak for the entirety of the UK, but London tap water tastes like it’s recently been passed by an 80-year-old man who drank it to accompany a meal of raw onions and copper.

Canada’s greatest strength is its people. That stereotypical politeness that produces a million unnecessary daily proclamations of “Sorry!” is actually a gift. Making friends becomes easy in a land where you’re rarely in danger of becoming a punch line to someone else’s joke. This is the exact opposite of the UK, where even an off-the-cuff remark has the potential of being mocked until the end of time, as the great composer Arthur ‘Two Sheds” Jackson would attest.

The city of London may be historic and fascinating but the people can be downright hostile. If you haven’t acquired a group of friends at primary school or, at the very latest, university, don’t even try. Stranger danger!

Friends being mean to each other is practically an art form in the UK. Canadians don’t do that at all. It’s as if Kenny and Spenny took the entire country’s hostility and turned it on each other. For that, we owe them a debt of gratitude.

Okay, so this might not have been a strictly scientific study, but the next time you’re complaining about the rent and the rain, remember that it could be worse. Unlike those poor Brits, you don’t have the self-inflicted recession of Brexit hovering on the horizon and no one you know gives a shit about The Masked Singer (no joke, this is the most-watched show in Britain).

Count your blessings and, as we Brits love to say, chin up and skin up!