Turbo Kid is an ode to the films we grew up watching in the ’80s. The future is 1997 and the world is a post-apocalyptic wasteland where water is scarce and people scavenge for survival.

The film focuses on a kid (Munro Chambers) as he rides his BMX bike around looking for treasure, making weapons and reading Turbo Rider comic books. He ends up running into a new friend named Apple (Laurence Leboeuf) who is a bit crazy, but that’s okay because everyone is a tad insane living in a toxic world.

Apple and the kid meet an arm wrestling outlaw named Frederic (Aaron Jeffery) and the three decide that it’s about time to dethrone the ruthless one-eyed tyrant Zeus (Michael Ironside). Having Ironside as the villain was a great casting choice as he played a few iconic characters in the late ’80s like Jester from Top Gun.

If you’re not familiar with Turbo Kid, it’s based on the film short T is for Turbo which is included in the horror anthology film The ABCs of Death. This is definitely considered a B film or a cult like sci-fi flick that was directed and written by François Simard, Anouk Whissell and Yoann-Karl Whissell, better known as RKSS. Overall, the filming only took 22 days just outside of Montreal where they had to fight the elements of a Quebec winter. 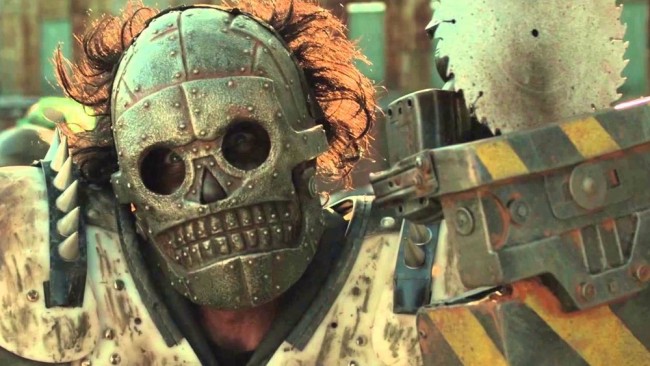 I guess in some ways the film is sort of a like a poor man’s Mad Max, but as you watch it you will recognize many influences including Nintendo or Atari games. For instance, Apple has life bars that are illustrated by a certain number of pixelated hearts.

What you end up getting with Turbo Kid is a lot of nostalgia alongside a kick ass soundtrack. Honestly, the soundtrack alone is worth the price of admission. The film was obviously on a low budget but that didn’t hamper the costumes. Almost every outfit utilized some sort of household item like laundry baskets as samurai hats or football pads as armour. 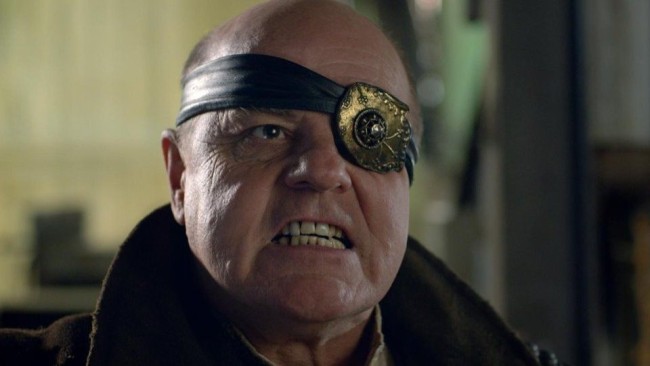 I also loved the weapons that were created – like a gnome on a stick that was used by Apple, or the kid’s NES Power Glove that shoots some sort of explosive laser and one of the bad guys named Skeletron (Edwin Wright) shoots rotating saw blades from his wrist.

Of course, this film has its share of blood and gore. There are scenes where people’s faces are chopped up and a human torso is cut and lands on someone’s head, and did I say there was a lot of blood?

There is also a scene where Zeus grinds up people in this large blender and, voila, they have drinking water! The violence is definitely over the top but that’s what you get with this B film genre. There is a certain art and creativity to these types of movies that some people may not appreciate so it’s not for everyone. 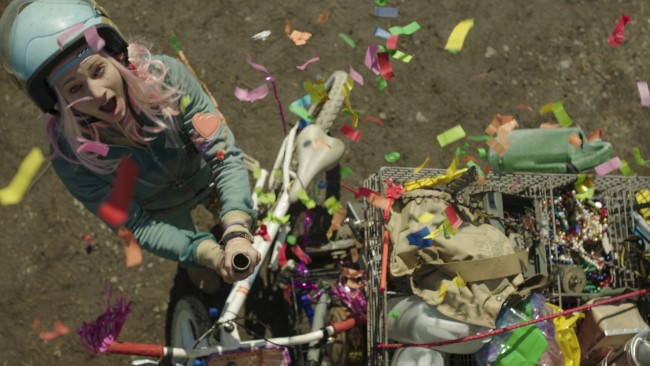 Overall, Turbo Kid is a fun film with a ton of nostalgia, a great musical score and a lot of blood. There are some fantastic Canadian directors coming out of this genre like RKSS, April Mullen and even the Soska Twins here in Vancouver.

There’s a time and place for this film – and that’s late night viewing at the RIO Theatre in Vancouver. It opens Saturday night. Click here for show times.

I had a good time watching this and although it’s not perfect, I have no problems giving this one 3 raindrops out of 5.

You know what this film is going in and there is a definite audience for it, so my rating on this one doesn’t really matter. If you’re a fan of gore, and independent cult films, go and check it out and make sure you are freshly pressed beforehand.