In case you need a quality chaser after consuming the cheap tequila that was Justice League, then give the film Three Billboards Outside Ebbing, Missouri a go. It’s one of the year’s best films.

It’s familiar territory for director Martin McDonagh (In Bruges) who has a fantastic track record playing in this genre sandbox. 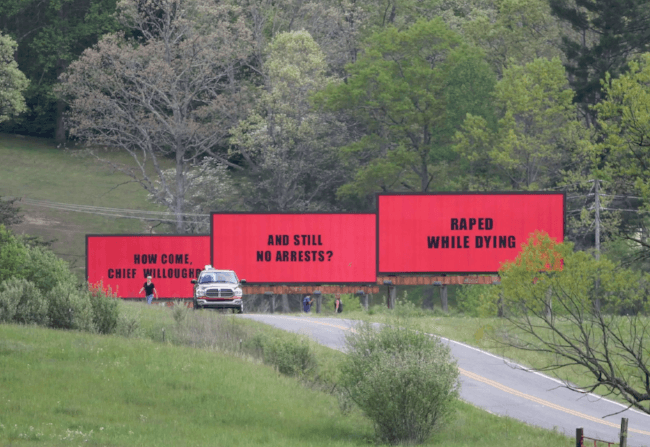 Three Billboards is one of those films where you think you have a handle on what kind of characters you are dealing with until things go completely off the rails.

You have Mildred Hayes (Frances McDormand) a tough but grieving mother whose daughter was murdered eight months ago. Mildred curses and insults her way through life and doesn’t necessarily have an affinity for the local law enforcement.

It’s that contempt and rage towards the town’s police that forces Mildred to rent three billboards that say “Raped While Dying”, “And Still No Arrests”, “How Come, Chief Willoughby?”

The billboards don’t really sit well with some of the townsfolk but especially with Chief Willoughby (Woody Harrelson) and his brutish and racist deputy officer Dixon (Sam Rockwell), a manchild who walks around with a gun and a short fuse.

The text of those billboards provides the narrative but that only sets off a chain of events that takes the viewer down a dizzying rabbit hole full of hilarity and dramatic twists.

Most of the film is focused on Mildred, Willoughby; and Dixon and at first glance, they are characters who seem familiar with a predictable story. But those assumptions are deceiving and just like the town of Ebbing, Missouri, there is something bubbling just below the surface. 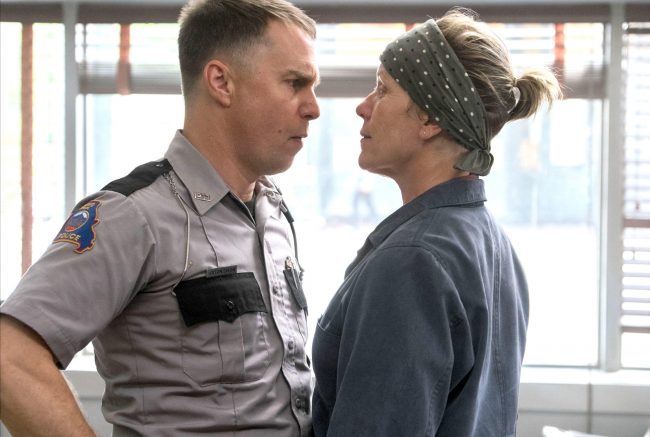 For all of its dark humour, there are moments of redemption and heartbreak that rip at your soul. Director McDonagh does a masterful job of putting together one of the greatest dark comedies that I have ever seen on screen. There are many messages at play that are as big and as bold as the messages on those three billboards.

What truly makes this film tick is Frances McDormand who plays a flawed character that you can’t help but cheer for, even if you know her methods are probably doing more harm than good. She plays Mildred with such zest and zeal that you can already make her the odds-on favourite to win Best Actress at every award show she is nominated in.

Sam Rockwell should also get some Oscar consideration for his portrayal of Dixon a despicable human being. He is one of Hollywood’s most underrated actors but after this performance, the transformation will be complete to one of the most sought-after actors in the biz.

Woody Harrelson, who uses his natural charm and likability to make Chief Willoughby seem like a pillar of decency. He’s magnetic in every scene he’s in.

But behind all those great performances are some strong, effective supporting portrayals as well: Abbie Cornish as Willoughby’s wife, Anne; Peter Dinklage as the “local dwarf” (who has one of the best monologues); Caleb Landry Jones as the representative of the ad agency that owns the billboards; and John Hawkes as Mildred’s ex-husband.

It’s the richness and complexity of the characters that allows this film to work. 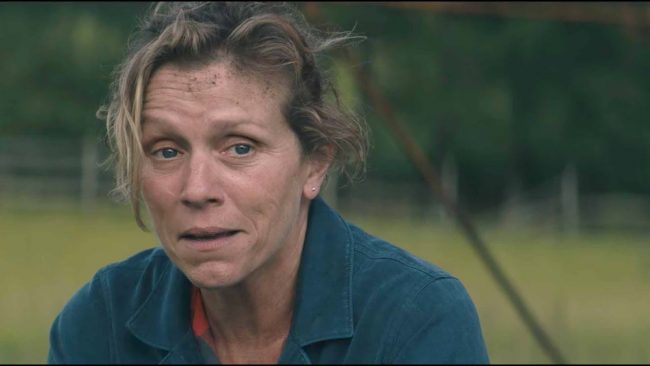 The difference between a good movie and a great movie is how deeply the film implants itself into your memory banks. Three Billboards Outside Ebbing, Missouri will marinate and linger with you well after the final credits have rolled. The movie is drenched in character study and stripped of sentiment. It uses humour to get through the moroseness of it all and in the end, you get a story about redemption.

Director Martin McDonagh’s approach to the film is specific and uncompromising and doesn’t live in a safe zone. Had there been lesser actors attached, it might have been a complete failure. Yet, there is nothing resembling failure here. It’s one of 2017’s best films and it’s something you need to support and see in a theatre.

It easily gets a massive 5 out of 5 from me.

Playing at a theatre near you. Rated R (for violence, language throughout, and some sexual references)