Shane Black’s sequel to 1987’s Predator is called The Predator, though damned if we know why this title is singular. The new movie doesn’t have just one dreadlocked space invader, with a nightmarish genital-looking mouth, it has a whole posse’s worth of them.

After escaping from its own kind for reasons not initially clear, a predator crash lands on Earth. The escapee is quickly followed by a bigger and badder member of his kin that comes chasing after it, bringing along a couple predator pups.

That confusion isn’t the only time writer/director Shane Black pokes fun with the title in his new take on the franchise. There’s a hilarious running bit throughout the new movie mulling over why we call these creatures, who hunt for sport, “predators”–a wink to the decision to alter the original movie’s title from The Hunter. Predator just sounds cooler. The Predator, equally so. 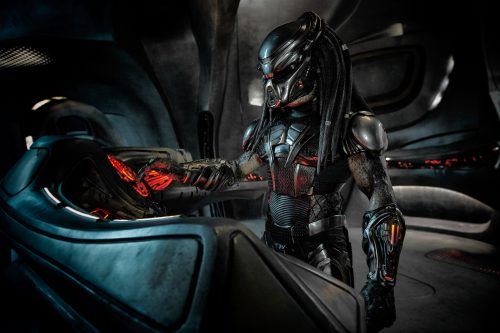 There’s lots to laugh at in The Predator, thanks to Black’s flair for witty banter between macho men. He wrote Lethal Weapon, and directed buddy cop action movies like Kiss Kiss Bang Bang and The Nice Guys. Horror isn’t really his thing. So amidst all the CGI-fare and human bodies turned inside out, there’s a sweet little buddy comedy here between Boyd Holbrook, Trevante Rhodes and Olivia Munn.

Holbrook (who many will recognize as the guy chasing Pablo Escobar in Narcos) is Quinn, a sniper whose team is ambushed by the first predator. He survives and even swipes some alien gear in the process, all of which ends up with his child Rory (Jacob Tremblay).

The kid gets to tinker with a really neat Halloween costume but attracts the attention of both aliens, the predator dogs, and whatever secret anti-extra-terrestrial agency Sterling K Brown’s slick but sinister character Traeger is operating.

Quinn in the meantime runs into Trevante Rhodes’ Nebraska, a soldier suffering from PTSD who, along with a troop dubbed “The Loonies,” reluctantly joins the fight against the killer tourists from space.

The movie often suffers from its overly abundant plot and characters, getting wobbly particularly in its back half as the focus spins out of control. Though more characters also mean more bodies to be filleted, and let’s face it, more bloodied fun. Whenever Black loses his grip on franchise movie making, he falls back on self-aware zingers, always keeping things light, never taking it too seriously.

Olivia Munn’s scientist Casey also gets in on the action. She’s the odd one out among the jarheads, not just because she isn’t a trained killer but mostly because she’s a woman. The movie actually has a clever bit of fun about this gender situation.

Munn’s Casey is accidentally tranquillized during a run-in with one of the aliens. Afterwards, as she lies in a bed, the heroic tough guys circle around, keeping her protected but trying not to be creepy about it.

These are guys that could have come straight from an 80s movie, while Munn’s character is distinctivly 21st century. The chauvinism of Lethal Weapon just won’t fly here.

The way the men awkwardly try to ease around the situation is both hysterical and a clear sign that Black has been thinking about recent conversations on how women should be depicted on screen and how to behave around women on set.

With that in mind, it’s unfortunate that Black also cast his friend Steven Wilder Striegel, a registered sex offender, in a scene with Munn without her knowing his history. After discovering the situation, Munn alerted the studio and the scene was cut from the movie. The situation, and Munn’s comments to Hollywood Reporter about feeling ostracized in the aftermath, put an unfortunate damper on all this.

The Predator delivers a good time without demanding that we think too hard about anything. But the fallout just goes to show how some of us don’t think things through well enough.