Mockingjay is the third book in The Hunger Games trilogy written by Suzanne Collins. Yet for some reason Hollywood gives us Mockingjay – Part 1 with part 2 coming out next year. This seems to be the new trend to capitalize on box office dollars, but ultimately, all it does is just frustrates the hell out of the viewer – those greedy suits!

Oh well, at least we get another healthy dose of Jennifer Lawrence as Katniss Everdeen in a film that doesn’t follow the all out action that we have come accustom to in the the series’ predecessors. Instead, director Francis Lawrence (no relation) draws out part one into a political thriller.

The film really begins and ends with Jennifer Lawrence who, at only 24 years old, has evolved into one of the best leading ladies in Hollywood. Lawrence has really matured into a fabulous actor and has come along way from the first Hunger Games to Mockingjay.

There is a great scene where we get to hear Lawrence sing a soulful rendition of “The Hanging Tree” and we learn that she has a very smokey and sultry voice; it’s sad that it was not included on the soundtrack. On a side note, while watching the film, I heard Lorde’s new single Yellow Flicker Beat, which is on the Mockingjay soundtrack – a very good song that adds a bit of haunting ambiance. 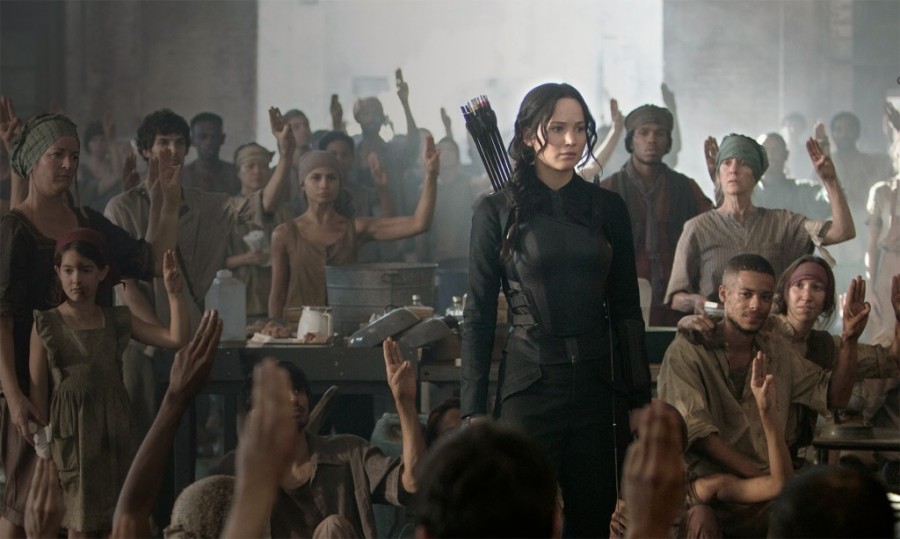 We are given an array of great actors playing interesting characters in a dystopian future. Which, by the way, this dystopian theme has been present in a lot of young adult books and films this year like Divergent, Maze Runner and The Giver, but Francis Lawrence has done the best job of taking the book and adapting Suzanne Collins dark vision to the big screen.

Instead of good looking young people – “tributes” – getting into an arena to kill each other, we get character development, which is purposely done to set up the dramatic, and heart wrenching Mockingjay – Part 2.

Speaking of great actors, one of the saddest parts of the film is knowing that Philip Seymour Hoffman, who reprises his role as Plutarch Heavensbee, is no longer on this planet. It was tough to watch because every scene that he was in, his aura shone through the screen. The man could act and I’m going to miss his talent. It will be interesting to see what they do with him in part 2.

Julianne Moore made her Hunger Games debut performance as the President of District 13 Alma Coin. She is fabulous in this film and it’s almost an embarrassment of riches with the likes of Donald Sutherland who plays President Snow. The Canadian actor, who has played many different roles throughout his career, always does his best work as a bad guy and President Snow might go down as one of his most memorable.

You still have Woody Harrelson reprising his role as Haymitch, there is also Stanley Tucci, Liam Hemsworth, not to mention Game of Thrones‘s Natalie Dormer. We are so used to seeing Dormer in period pieces that we forget that she does exist in present day, not to mention she sports a bad ass hair cut and facial tattoo.

Elizabeth Banks returns and adds humour and heart to Effie Trinket and it’s fun to see her go from glamour to coveralls. 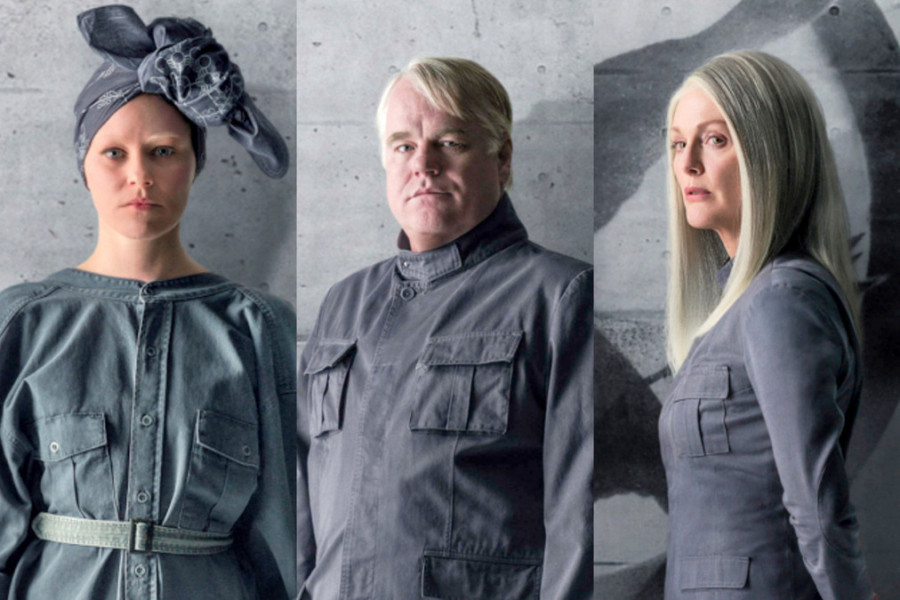 Mockingjay – Part 1 would be a long drawn out film if it wasn’t for the all-star cast and the fantastic writing, which gives the series a more human element.

Most of the film takes place in the secret underground bunker of District 13, as District 12 was completely obliterated by the Capitol of Panem.

Katniss Everdeen is used as a political pawn for the rebellion. She becomes the Mockingjay and is used as a symbol in propaganda videos to stir up revolt in the other districts. Meanwhile the Capitol, lead by President Snow, has a secret weapon of their own in Peeta played by Josh Hutcherson.

Without giving too much away, the Capitol and rebellion play a game of politics and use the media to spread their message. Sound familiar? The narrative of the books and film play directly to what is happening in the real-world of global politics and our experience with warzone reporting, news management and spin.

I have a message for President Snow: Fire is catching, and if we burn, you burn with us! – Katniss Everdeen

You can’t help to get swept up in the emotion and tension that plays throughout the film, just ask my fingernails. Sure we all love explosions and fight scenes, but what this film lacks in action it makes up for in story telling, and that’s something that maybe the previous films didn’t have.

Mockingjay – Part 1 seems tighter, focused, and more grown up. Although it’s agonizing to have to wait another full year to see part 2, Mockingjay – Part 1 is well worth the dollars to see in a theatre near you. So far, it is the best film of the franchise and will probably make it on my list as one of the top movies of 2014.

I’m giving this 4 out of 5 raindrops, which ties Interstellar but Guardians of the Galaxy still leads the way with a 4.5. I will be doing a write up of the best films of 2014 in the coming weeks. Stay tuned.