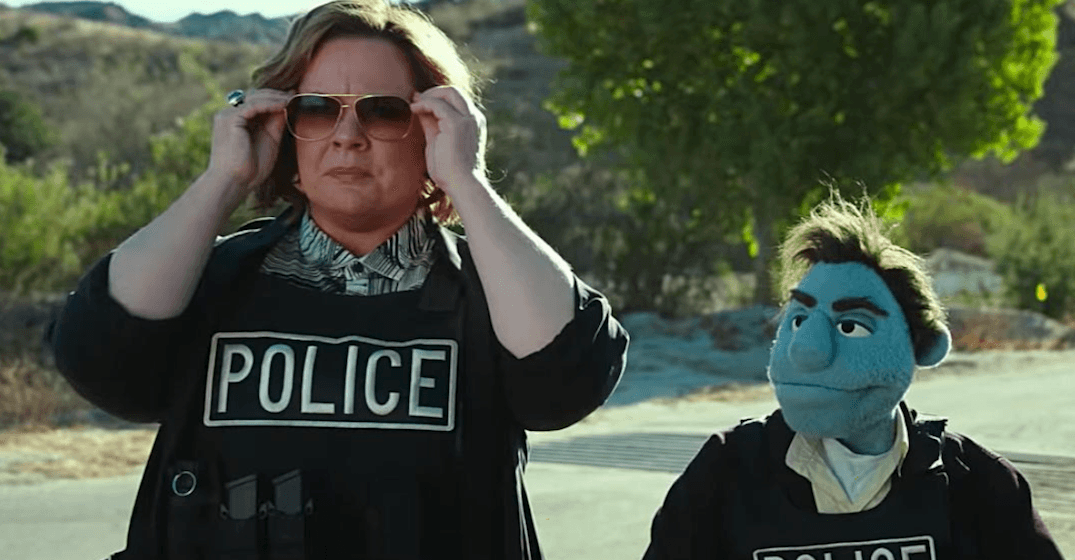 The Happytime Murders is a film noir by way of The Muppets that made a wrong turn and ended up in a dark alleyway, on a seedy street, in the wrong part of town.

The classic noir set up is all there – a private eye, a smoky-voiced femme fatale (in this case a puppet) and a blackmailing case that needs investigating. What started off as a send-up to the genre quickly fell into a series of scenes that go a little too over-the-top to remain entertaining.

The Happytime Murders is what you get when you have a room full of writers saying, “imagine how far we could go if they were puppets?”

Phil Philips (voiced by Bill Barretta) is a private investigator and ex-cop, who happens to be the only puppet ever to serve and protect. He quickly finds himself caught up in a murder mystery and crosses paths with his old partner Detective Connie Edwards (Melissa McCarthy).

The two haven’t been on speaking terms in quite some time. During a shoot-out, it appears Philips intentionally missed the puppet holding Edwards as a human shield, presumably because puppets won’t shoot their own.

The film uses puppets as a stand-in for minorities. It comes off heavy-handed, but because it’s not used in any poignant way. It really just serves as a plot device for the hurdles Phil must overcome as he tries to get to the bottom of things.

There are a lot of opportunities to look deeper into a universe that has people and puppet living side-by-side, but The Happytime Murders doesn’t seem to do enough with it. Most of the liberties that screenwriter Todd Berger and director Brian Henson seem to take focus on the ability to be hyper-violent, and at times almost pornographic, with the puppets. There is no shortage of cotton thrown about in the puppet death scenes, and far too much by way of puppet bodily fluids.

The Happytime Murders uses too much of its already tight 91-minute runtime to repeat the same joke about the puppets in LA being oversexed. There could have been much better worldbuilding or time used to dig into the socio-economics of this world. As odd as it sounds, the movie would have been much better served if they played it straight. Phil seems to be the only character in a noir film, and that’s tragic. There were moments of genuine creativity and some chuckles, but not enough to justify the price of admission.

A movie like Who Framed Roger Rabbit? works because, at the end of the day, you can take out the toon element and have the same story. The fun of that movie was the toons being toons, and how that contrasted to the otherwise drab human world.

Here we could have had much the same, yet the most cartoonish character ended up being played by Melissa McCarthy. I walked out of a movie billed as being “no Sesame, all street” and the best scene was with Det. Edwards and Bubbles (Maya Rudolph) just bouncing off each other. It was their subtle absurdity that just reminded me how much that element was missing from the rest of the movie.

An interesting concept that doesn’t live up to its full potential, I give The Happytime Murders 1, 2…2! 2 out of 5, ah-ah-aaahhhh.