A Tale of Three Cities is one of the special presentations at the Vancouver International Film Festival, following its international premiere at TIFF. Like the title suggests, Three Cities follows star-crossed lovers across an important period of Chinese history. While starting off with a bang, even the addition of China’s biggest names (Lau Ching-wan and Tang Wei) wasn’t enough to save face for this production.

The first thing I learned about Three Cities became its most obvious selling point: the Jackie Chan connection. Today, Chan is still very much the legend in Hong Kong and most of Asia, and I was curious to see how this would factor into the story. Here is the beginning of the official writeup:

Based on the incredible real-life story of kung-fu superstar Jackie Chan’s parents, the film opens in 1950s Hong Kong with Daolong (Chan’s future father) working as a cook in the US Consulate. A flashback takes us to the early 1930s, where dashing young Daolong, a customs officer and part-time KMT secret agent, stops beautiful young Yuerong at a checkpoint. Recently widowed, Yuerong is so poor that she is forced to smuggle opium to stay alive.

(Yes, that’s only halfway through the description, and it’s the simpler half by far.) Three Cities is a retelling of Beauty and the Beast in pre-revolutionary China. Unlike the Disney classic, we learn that she is more than just a beauty, and he is… well, he remains pretty brutish all the way through. Lau Ching-wan delivers on laughs, but we can’t quite take him seriously as Romeo; the script has him falling down and blacking out more than once, making for handy moments of plot development. 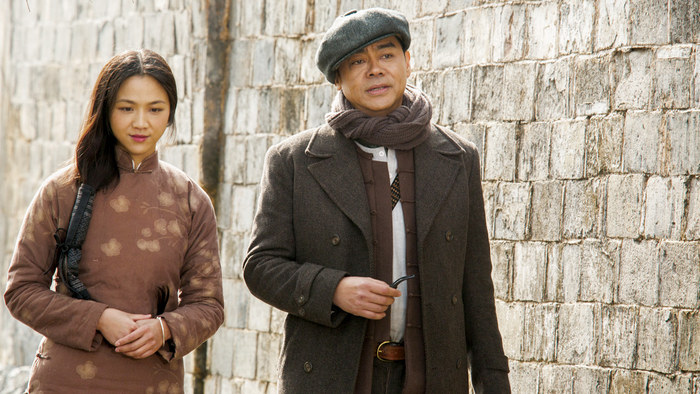 Despite a full roster of talent and convincing set designs, famed director/writer duo Mabel Cheung and Alex Law chose to drive home overarching themes at the expense of cohesive narrative. There are so many songs, family medallions, and items of symbolic importance, that nothing ends up becoming meaningful to the audience. The story isn’t so much hard-to-follow as it is repetitive, to the point where the lovers reenact similar separations across different historical events.

So lingering are these moments of unrequited passion that we’re left little time for motive and character development, especially among the supporting cast. (SPOILERS) Obligatory ‘best man’ Jing Boran, best known for winning a popular Chinese talent show, nobly sacrifices himself for ‘the cause’ while smuggling watches to the rebels. The problem is, the audience doesn’t find out that the clueless scholar had any real affinities for said cause until the very last minute. Jing hits the gas and ends up flipping the car over some sandbags, resulting in a convenient gas leak and explosion. Also, what a fitting way to go – the whole scene does great things for stereotypes about Asian driving skills.

I can’t imagine Jackie Chan telling the story about his parents met in such a heavy-handed manner. Chan is a master storyteller who understands, above all, how to captivate and entertain an audience. The same cannot be said for Three Cities, which proves to be a lackluster mess all the way through.

Two raindrops out of five.

A Tale of Three Cities played at the Vancouver International Film Festival. No screenings remaining.