It’s an admirable attempt but George Clooney’s latest directorial effort is a bust.

Suburbicon tries to weave a scathing satirical critique on race relations, mixed with biting social commentary, in addition to a rather unsettling murder plot. It ultimately ends up being a hodgepodge of elements that seldom works in a satisfying way.

The film is clearly an examination of Trump’s America under the guise of a domestic dark comedy thriller set in 1959. Although its intentions are earnest, the movie merely serves as a reminder of much stronger predecessors. 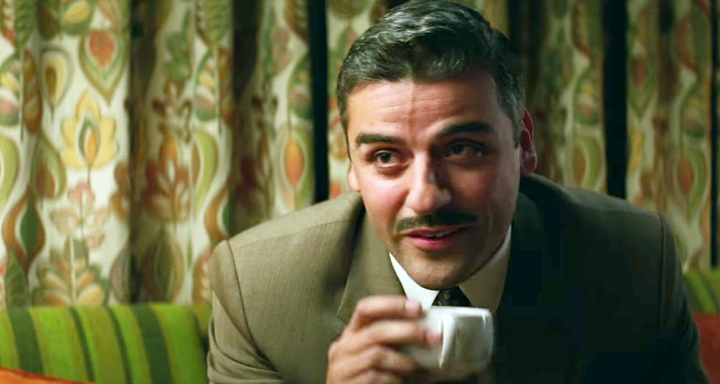 The story begins with a breezy, picturesque introduction to the seemingly idyllic town of Suburbicon. It looks like a pretty nice neighbourhood in the U.S.A. to raise your kids – if you happen to be white. If you’re a person of colour, as evidenced by an African American family who moves into the area and elicits scornful stares, then you may not be that welcome.

Suddenly, the plot shifts dramatically to show Matt Damon waking up his young son one night because some ruthless robbers are in their house.

Without giving too much away, let’s just say Damon’s wife (Julianne Moore) meets with a sudden demise and her sister (also Julianne Moore) takes over the maternal role to comfort the remaining family in their time of need. What follows is an unfolding pseudo-saga of deceit, betrayal, and more murder.

The connection to this storyline and the first is tenuous at best (both families have sons around the same age and the boys strike up a friendship) and shakily constructed. This underscores the greater problem with Suburbicon; it’s two competing movies haphazardly cobbled together.

As the film progresses it gets very reminiscent of a Joel and Ethan Cohen movie. This is no coincidence because the illustrious duo co-wrote the story along with Clooney and his frequent collaborator Grant Heslov. In fact, producer Joel Silver claims the Coen brothers wrote the script way back in 1986. Clooney was even set to star and direct (with the Coens producing) in 2005 but the project was again shelved for years. Frankly, it should have stayed on the shelf.

Editing seems to be the most glaring issue plaguing the film. Choppy, awkward cuts are strewn everywhere, leading one to wonder how much of the original story or how many scenes were left out altogether.

The end result is truly ineffective and makes for some thin characterization. Stuff just kind of happens; we move from point A to point B in the plot department but it’s essentially a paint-by-numbers approach, and a messy one at that.

What makes Suburbicon really frustrating is that, despite sloppy plotting, jumbled themes, and lacklustre writing, the acting is tremendous and the production design is top-notch. Damon proves to be formidable in his role, though his character doesn’t quite take off. Julianne Moore does commendable work once again. Oscar Isaac is predictably excellent but only gets a handful of scenes.

And the film looks great; Clooney’s shot compositions are well-staged and always eye-catching. The lighting is bright and vibrant, lending a striking look to the visuals. The time period details are also meticulously captured, right down to the vintage cars, 1950s fashion, and even the archaic Flash-matic television remote controls.

The very fine performances and strong aesthetic, however, speak to a bigger issue – the whole exercise simply results in squandered talent.

In the end, the movie feels like a supergroup reuniting for a new album that sucks because it just recycles stale material. All the pieces for success are in place here but it never comes together, resulting in an oddly hollow viewing experience. It may have looked promising on paper but Suburbicon strikes out and only gets 2 1/2 out of 5 pieces of popcorn.

Playing at a theatre near you. Rated PG/14A and is 105 minutes long.