Like Apple products, Steve Jobs is a slick, shiny, functional film that is not as glitchy as the 2013 Ashton Kutcher version.

This new biopic about the Apple co-founder is directed by the great Danny Boyle (Trainspotting, Slumdog Millionaire) and written by Aaron Sorkin (The Social Network, A Few Good Men.) It’s loosely based on Walter Isaacson’s acclaimed biography of the same name.

Anytime you have a Sorkin-written script you can expect a lot of talking heads, and Steve Jobs doesn’t stray away from that style. The film is divided into three distinct 40-minute acts that capture a snapshot of three different product launches. It’s basically 14 years spread over three days.

Before introducing the next big revolutionary Mac computer, drama surrounds Jobs in the minutes and seconds before he takes to the stage. In Act 1 we see Steve Jobs (Michael Fassbender) in 1984, a couple of days after the famous “1984” Super Bowl ad, and he’s ready to show the world the brand new Macintosh personal computer. 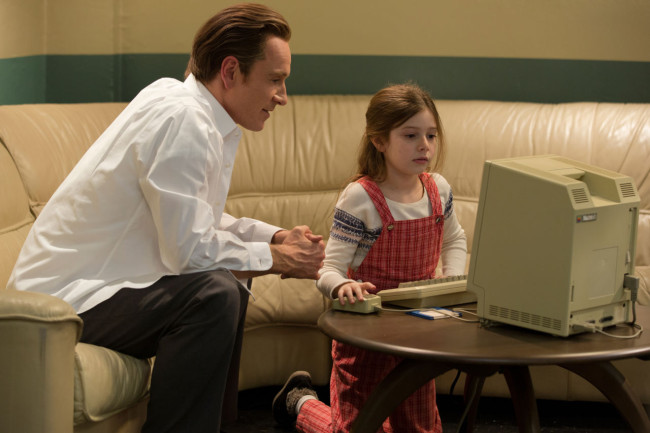 As Jobs prepares for what he considers to be one of the greatest moments in human history, backstage we see the non human side of the innovator as he interacts with a young girl named Lisa who he claims isn’t his daughter. That relationship is one of the key points throughout the film and is also the most heartbreaking.

Obviously a lot of the drama that happens behind the scenes didn’t actually take place minutes before a launch, but the film is stylized to show you the issues and the overall essence of the lead character.

Each part of the trilogy has a distinctive look and feel and is filmed in the technology of the day. Act One was shot in 16mm, Act Two in 35mm, and Act Three was shot in very crisp digital. Director Danny Boyle does an amazing job of bringing just the right amount of tension to the scenes along with some beautiful shots with a roaming camera. 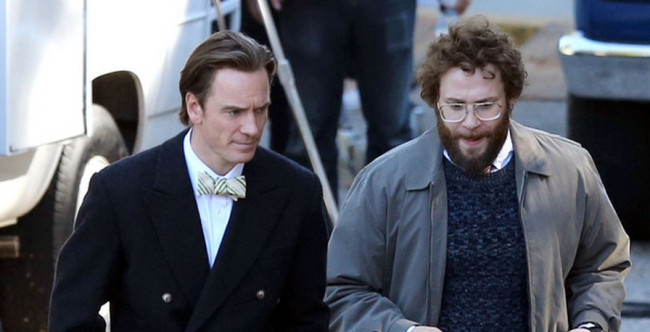 In what is Shakespearean type irony, Jobs is a man who revolutionized communication and helped the world to connect, but he’s incredibly horrible at human interaction. At one point in the film Jobs is told, “Your products are better than you are!”

Although there is a lot of dialogue, the film is fast paced with each act peppered with necessary flashbacks alongside a fantastic soundtrack. The film’s score was created by Award-winning composer Daniel Pemberton, as well as includes two iconic tracks from Bob Dylan, and songs by The Libertines and the Maccabees.

You can’t get away with this type of film style without having actors who can pull it off, and Michael Fassbender gives a career defining performance. Without a doubt it would be a cinematic crime if he is not nominated for an Oscar for his portrayal of Jobs. It’s amazing that Leonardo DiCarpio, Tom Cruise and Christian Bale were all originally attached to the role but it was Fassbender who was born for it. 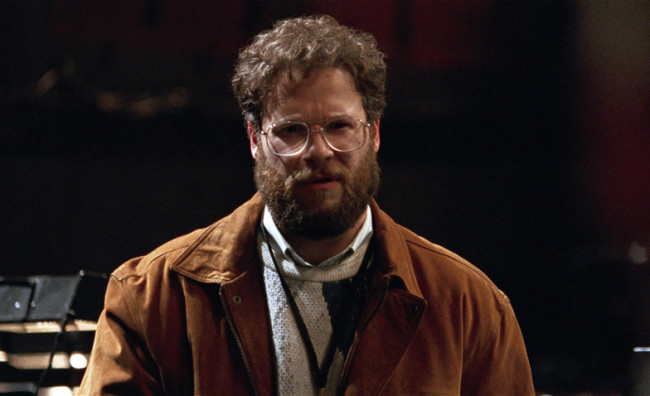 Vancouver’s Seth Rogen is a very pleasant surprise as Apple co-founder Steve Wozniak. It’s always fascinating to see a comedic actor jump into a dramatic role, and Rogen pulls it off with subtle beauty. This will hopefully open up bigger dramatic roles for the Canadian actor.

In this film Woz (who was also the consultant on the film) actually comes off as Jobs’ conscience and the one man who can put up with his friend’s egotistical aura and manic mood swings. There are some very powerful exchanges between Rogen and Fassbender that are some of the best scenes in the film. 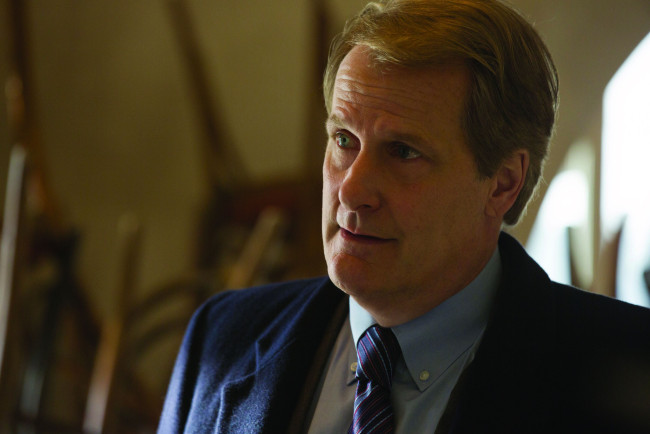 Not to be outdone, Kate Winslet nails Joanna Hoffman, Apple’s marketing executive and close confident to Steve Jobs. She amusingly calls herself his wife but without the sappy love part.

If anyone can handle a Sorkin script it’s Jeff Daniels, who plays Apple’s CEO Jeff Sculley to a T. Daniels starred in the HBO series Newsroom, which was also created by Sorkin.

The film lightly brushes the mental illness that inflicted Jobs. The man definitely lived his life on his own terms but many felt he created the drama around him through hallucination and constant paranoia. 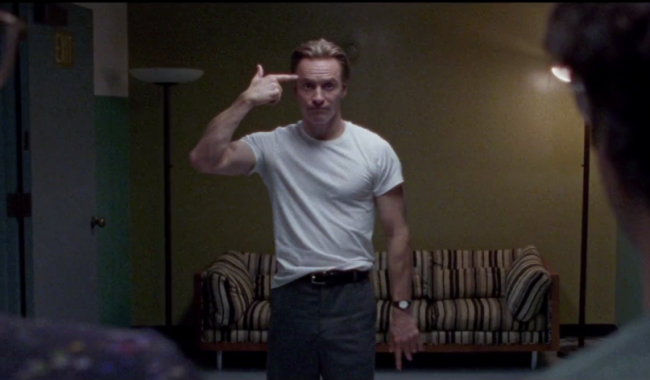 Cinema Factoid: The film is divided into three acts and was shot in sequence. The actors spent two weeks rehearsing before each shoot, which also took two weeks. Kate Winslet said that by act three, Michael Fassbender was completely off script and had memorized 180 pages of dialogue.

Steve Jobs is more than a binary film in the sense that it shows many different realities of one of the world’s greatest marketing geniuses.

Overall, this is another great film of 2015 and easily hops into my top five list. It’s truly remarkable to see films like The Walk, The Martian, Black Mass, Sicario and now Steve Jobs all in the theatre at the same time. We are currently witnessing a golden age.

I easily give Steve Jobs 4.5 raindrops out of 5. If you’re interested, I also recommend checking out the Alex Gibney documentary Steve Jobs: The Man in the Machine. You can find it on, wait for it… iTunes.

This film is rated R and opens today.