Southpaw is a boxing film that follows the same formula we have become accustomed to in other movies that feature the sweet science.

As someone who also covers and writes about combat sports, I was instantly drawn to Southpaw, mainly because it has a fantastic cast with the likes of Jake Gyllenhaal, Forest Whitaker, Rachel McAdams, and Curtis “50 Cent” Jackson to name a few. 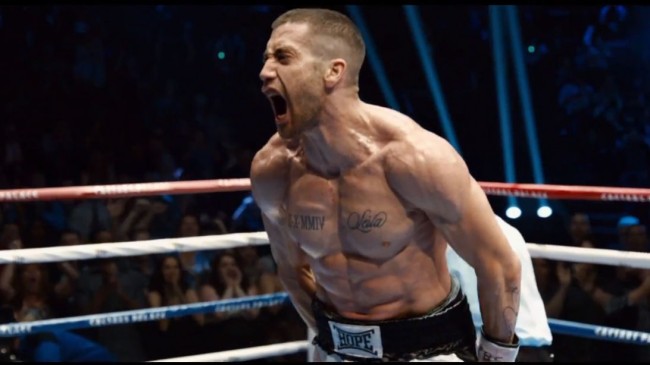 What was also intriguing was that Southpaw was directed by Antoine Fuqua (Training Day) and written by Kurt Sutter (Sons of Anarchy). So going into this flick, how could you not have high hopes?

Jake Gyllenhaal plays Billy “The Great” Hope, who is the reigning Junior Middleweight Boxing Champion of the World. Originally this part was written for Eminem, but he backed out of the project which allowed Gyllenhaal to take on the role.

Billy Hope grew up in the system as an orphan in Hell’s Kitchen, but he was able to find a life when he was introduced to boxing. The man fought his way to becoming an undefeated champ, with a mansion, fast cars, a beautiful family, and a life that only poor kids in the projects dreamed about. 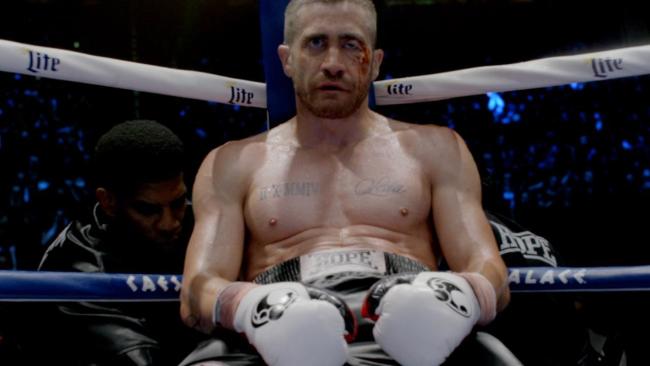 Hope’s boxing style is to take as much punishment as possible and win the fight in the later rounds, sort of like Rocky Balboa. Obviously this is not a good strategy for health reasons, which in turn, makes his wife (Rachel McAdams) worried about the champ getting punch drunk.

It appears Hope’s career is coming close to retirement, but when tragedy strikes his life is turned upside down, which leads to his friend and manager Jordan Mains (50 Cent) leaving him in the dust. Not to mention, everything he holds dear, including his daughter (Oona Laurence), is taken from him. 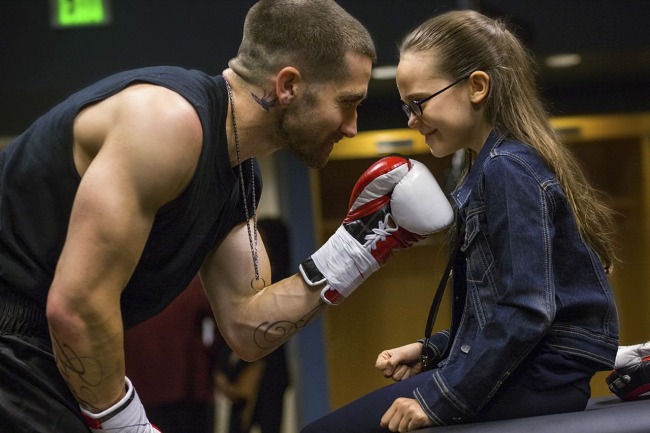 The interaction between Billy and his daughter Leila was where a lot of the heart of the film came through. Maybe as a parent it’s easy to feel sympathy for a dad who has to fight to get his daughter back.

There was also an interesting scene where 50 Cent’s character sits Billy down to tell him that he’s going bankrupt, which I found ironic but maybe that’s just me. However, there was no explanation on why Billy was losing his money.

Eventually Hope hits rock bottom and finds himself back in his old neighbourhood fighting his demons and looking for personal redemption and a chance to get his daughter and life back. 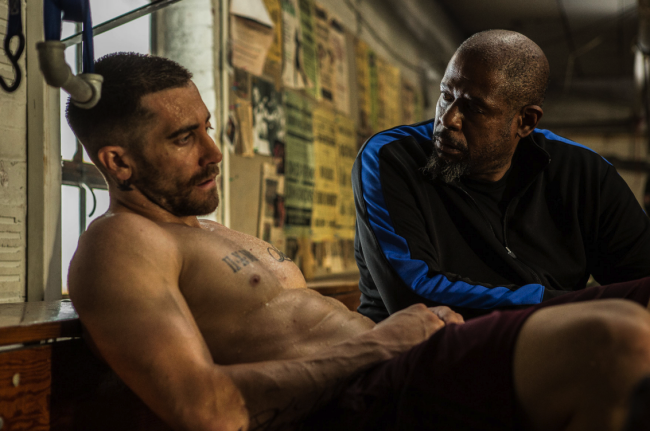 Tick explains the importance of learning to stick and move if you want to win fights. How Billy is undefeated and doesn’t know the subtle nuances of the defence is beyond me. You can’t go undefeated in pro boxing without knowing head movement, but we’ll let that pass.

Once again we are back to the recycled Rocky storylines, but let’s be honest, a lot of fight films follow that script. You know going into this movie that character redemption is as much a certainty as a good training montage.

Jake Gyllenhaal was terrific as Billy Hope. It’s a pretty crazy transformation in how this man goes from scrawny and creepy in Nightcrawler to a buff fighting machine in Southpaw. 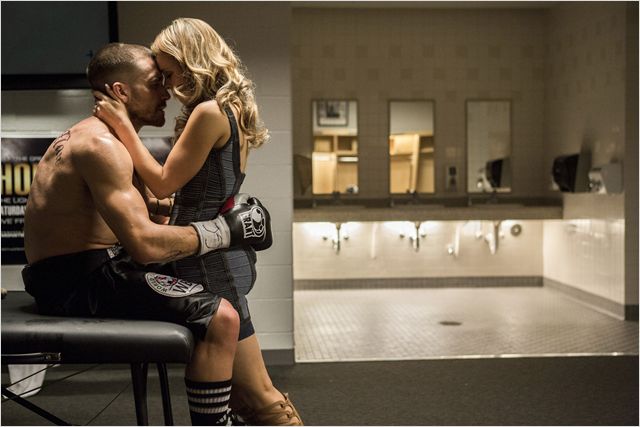 Jake does great work in mumbling his way through the film and coming off as a guy who loves his family but is on the verge of losing his marbles due to the constant punishment he takes to his brain. He’s a ticking time bomb who finds his sanctuary in his wife and daughter. The character would be something to behold had the writing been better.

If you are going to recycle old storylines, at least provide a script that isn’t full of cliches and doesn’t jump around from subplot to subplot. Give us something fresh and new. Yes it’s a boxing film, but why must we have a predictable story surrounding it? There were also so many subplots in this film that never really came to a resolution, or when they did, it was rushed. 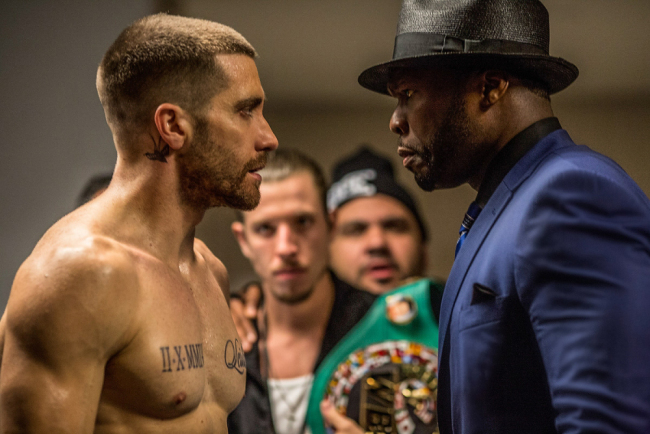 There is too much going on here which leaves a lot of loose ends. It’s like Sutter and Fuqua tried to cram as much as they could into two hours, which unfortunately forced character development to take a back seat.

What did work were the actual boxing scenes, which were made up of bloody and face-pounding close-ups where you could actually feel the punches. The boxing action definitely reminded me of Martin Scorsese’s Raging Bull, which could be considered the masterpiece when it comes to the genre.

However, Southpaw is far from being remotely considered a masterpiece. What we get is a very average movie. The acting was solid, but the film overall doesn’t provide you with anything new. That’s too bad because when you have a cast like this, all you need is a story that delivers. 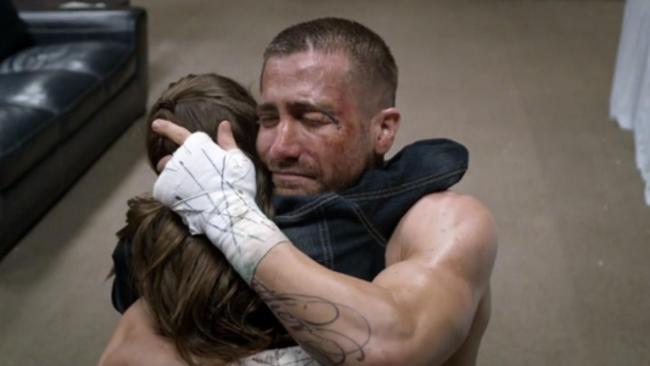 There is always room for a good fight film in the likes of Rocky, Warrior, or even Cinderella Man to name a few. Southpaw doesn’t come close to any of the great fight films of the past. Instead it just feels like a carbon copy. I suggest waiting to check this out when it’s available on video-on-demand, which might be sooner than later.

It’s easy to give this film 3 out of 5 raindrops. It’s not horrible, but when you watch it you’ll have déjà vu in that you will feel you have seen this story before. It’s worth checking out if you’re a fan of Jake Gyllenhaal, as he was the one bright spot. The man put himself through the ringer to prepare for the role.

Southpaw is in theatres now. Rated 14A with a running time of 123 minutes.