The music pulsates and the bass taps into your adrenal gland. Beat by beat, the tension raises. You sweat and tighten up from head to toe. When the bullets come you don’t know where they’re coming from. But you know you’re still breathing. So you keep going forward. 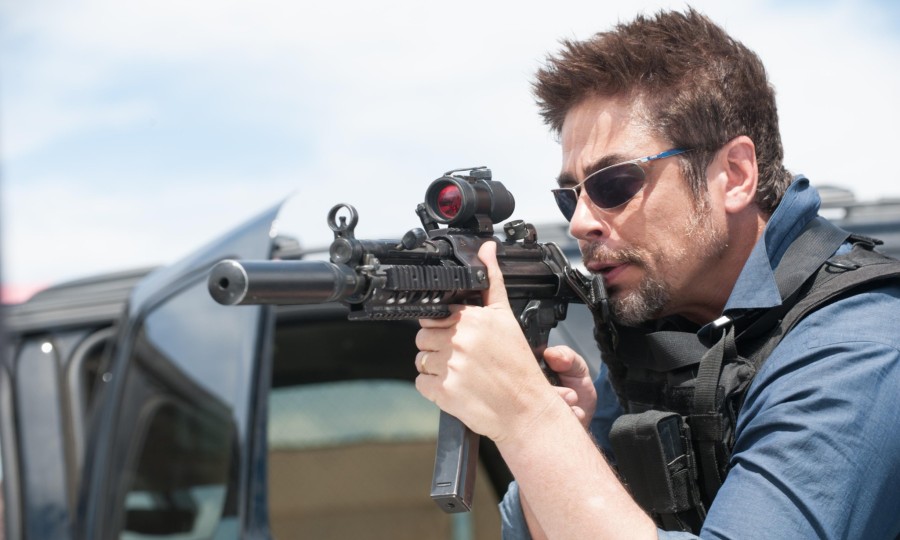 That could easily describe the experiences of the protagonist of Sicario, an exceptional new thriller starring Emily Blunt, Benicio Del Toro, and Josh Brolin. It could also describe the average experience of any random moviegoer. Sicario ramps up the heat as it tells a tale about drugs and cartels and Mexico and violence and vengeance. It’s tense, but not so dense that you can’t see the forest for the trees. It asks questions you can’t answer in the moment, and it gives you enough visceral thrills to make you forget you’re watching a fictional depiction of a very real situation.

Sicario’s two biggest action sequences don’t take place in either America or Mexico, despite centering on the cross-border drug trade between the two. Instead, the movie’s biggest scenes occur squarely on the border, on roads and in smuggling tunnels. The movie’s heroes aren’t fully heroic, and its villains have their multiple shades of grey and humanity. The film’s ending moments immediately feel reminiscent of the final scene of Traffic. Like that film before it, Sicario is a thrilling cinematic triumph. 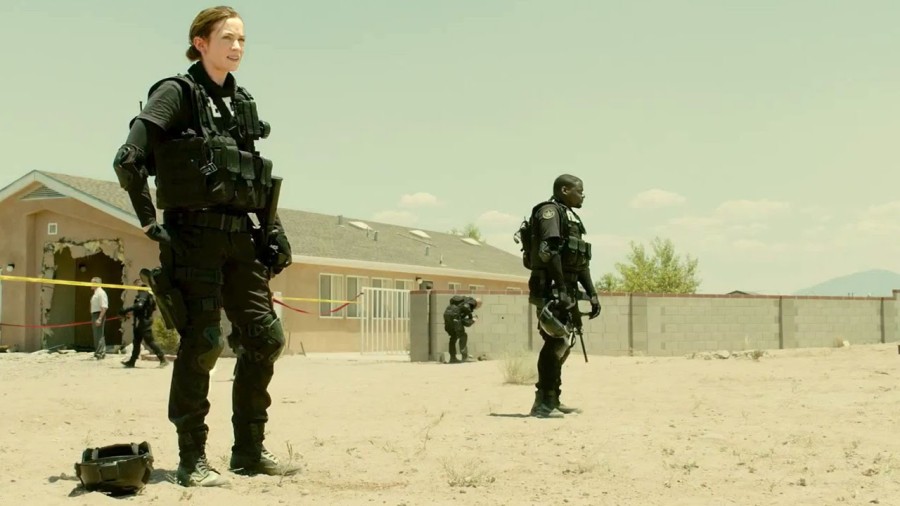 Emily Blunt stars at Kate Mercer, a greenhorn FBI agent out in the field trying to crack down on the Mexico/U.S.A. drug trade. After an incident on the job shakes her perceptions of right and wrong, she joins an elite and “off the books” operation led by Matt (Josh Brolin), a cowboy with a hard-on for shaking the cartel tree. The two are part of a squad after Mexcio’s “el jefe” kingpin. Lines become blurred, and Kate is eventually forced to choose where she stands ethically and legally. Along the way, they’re aided by shady government operatives and a particular foreign operative who keeps his cards close to his vest. 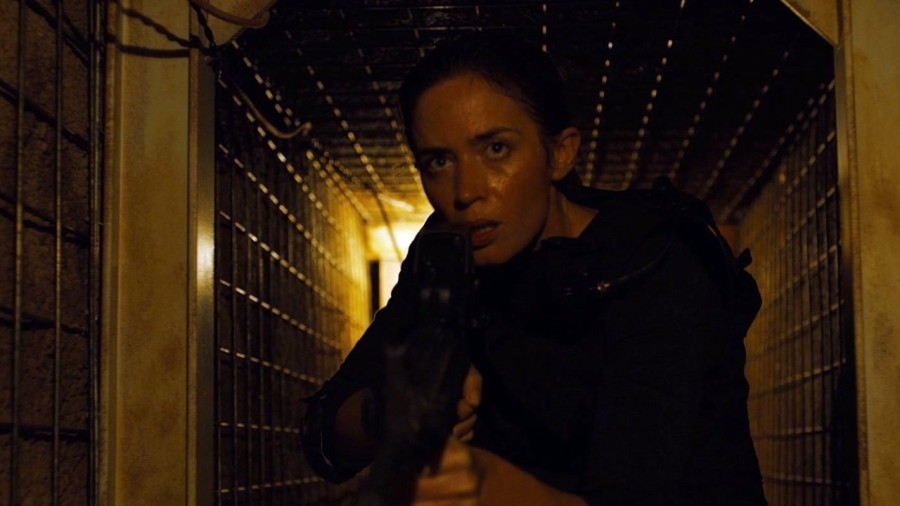 Blunt will undoubtedly receive countless comparisons to Jodie Foster in The Silence of the Lambs, and Clarice Starling is good company to stand beside. But the silent ace up the movie’s sleeve is Alejandro, played by Benicio Del Toro. In one of his best performances in years, Del Toro is quiet, exact, and tenacious. As Alejandro, Del Toro is a wolf biding his time with a pack until he’s able to get “unleashed” and feed his hunger.

Tension begins to ratchet up from the first frame. The opening FBI raid in an Arizona suburb, led by Emily Blunt’s agent Kate Mercer, makes your pulse pound. It absolutely feels urgent and authentic, and my armrest has the dents to show for it. The impact reminded me of the start of The Hurt Locker, and the two films would make for an interesting double feature. Like that Oscar-winner before it, Sicario ends the way great movies do, giving you as many questions as it does answers. 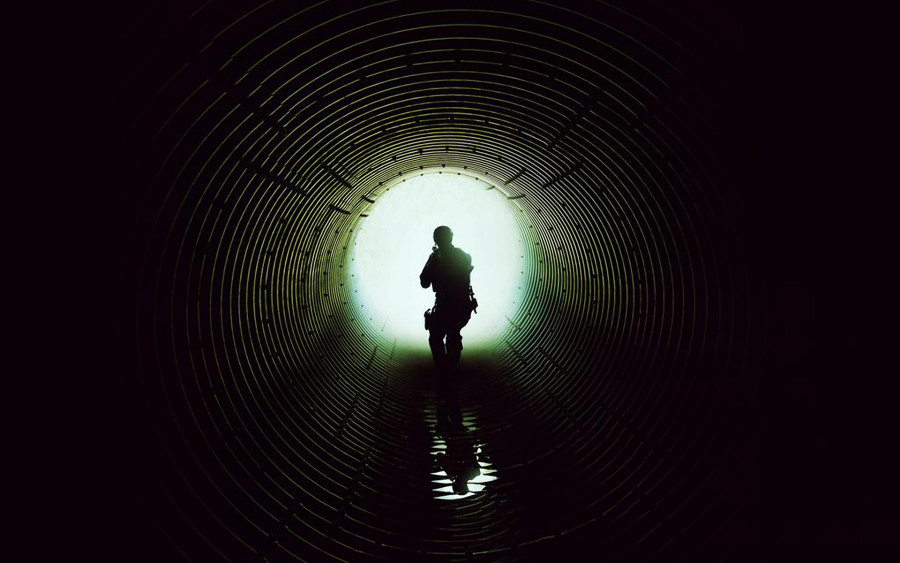 Director Denis Villeneuve proves to be as adept with action set-pieces as he is with quieter character-driven moments. Sicario’s appeal may be deemed as “too bleak” for some of the audiences that made his recent film Prisoners a hit – but it isn’t. It’s an honest and unflinching depiction of the darkest sides of drug-related cartel violence. The vast majority of the film’s violence, however, resides in the shadows and behind dark corners. There is violence and moments do get bloody, but the most haunting imagery is found in the aftermath of horrific events that we’re not shown.

Villeneuve’s fellow Canadian Victor Garber appears in a handful of scenes, and John Bernthal (aka Shane from The Walking Dead) surprises in a small role that I won’t reveal here. Bernthal is turning into a fantastic big screen character actor, following his time spent on that zombie show. The Wolf of Wall Street gave us a glimpse of the magic he was capable of, and he was one of the surprise highlights of this summer’s indie gem Me and Earl and the Dying Girl.

There are moments of absolute beauty in the film amongst the brutality. Who could expect anything less from the Director of Photography, Roger Deakins? He’s never won an Oscar, despite a body of work that has seen him cinematically redefine the American landscape. Sicario feels like a natural progression for Deakins in his artistic exploration of American horizons.

Sicario is a sensational piece of entertainment for a night out at the movies. It’s also the type of movie that makes me want to go for a beverage and discuss it for hours with my friends. As the film’s opening titles remind us, “sicario” is Spanish for “hitman.” Sicario is 2015’s translation of “tension” on the big screen. It’s easily one of this year’s best movies.