Hey, look another video game adaptation! The curse of bringing video games to the big screen continues as Rampage settles for too much storytelling and not enough action.

Maybe it’s just me, but I’m tired of creature features that are nothing more than popcorn munching, soda guzzling, B-movie schlock. Don’t get me wrong, I have an appreciation for schlock but it must be schlock done well. 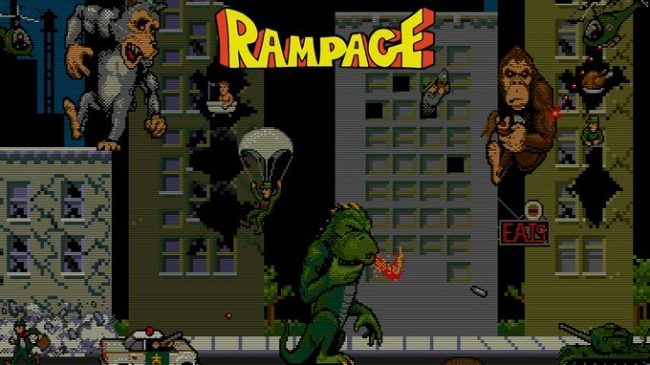 The Rampage movie is based on the 1986 arcade game. Image: Midway Games

Maybe that’s my adult opinion. I’m curious what the nine-year-old me would have thought about a Rampage movie? The video game was simple and fun to play. You had a gorilla named George, a giant wolf named Ralph, and a destructive lizard named Lizzie who basically climbed up buildings smashed them and murdered innocent civilians. The more destruction and death you caused, the more points you were awarded. You would think the movie would follow a similar premise, destroy as much sh*t as possible!

But instead, we get a long drawn out story full of exposition and cheesy dialogue. If you’re going to make a movie like this, go full out and tell a simple story but give the fans what they want – absolute carnage.

Johnson plays Davis Okoye, a primatologist who’s formed a friendship with George, an albino gorilla. When George is inadvertently exposed to some weird genetic-altering gas, he starts to grow at an incredible rate and becomes far more hostile, and of course, this makes Okoye start to worry about his gorilla-bro. When things start to go off the rails and George goes into destruct mode, Okoye gets help from Dr. Kate Caldwell (Naomie Harris) who uncovers the evil intentions of some rogue corporation and their scientific experiments. They quickly find out that George is not the only monster on his way to smashing the city of Chicago and the clock is ticking to find a cure. 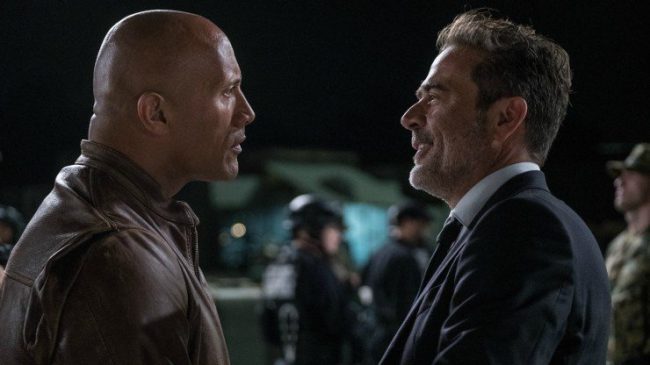 It’s a paint by numbers story and I’m fine with that. It’s just the movie spends too much time painting those numbers and should have been more about the monsters and the source material. Unfortunately, you don’t get to see any “Rampaging” until the final act of the film and that’s a damn shame.

Dwayne Johnson is once again doing what he does best and that’s being “The Rock.” He smoulders, kicks ass, and spits out some one-liners – wash, rinse, and repeat. The man is probably the hardest working actor in Hollywood knocking out movies every four months. He always brings a certain charisma to screen and God bless him for flaunting what got him there. He understands his brand perfectly and although he does a lot of these expensive B-movie action flicks, he seems to do them with a wink and a smile to the audience. So if all you want to see is “The Rock” saving the day, have at it. 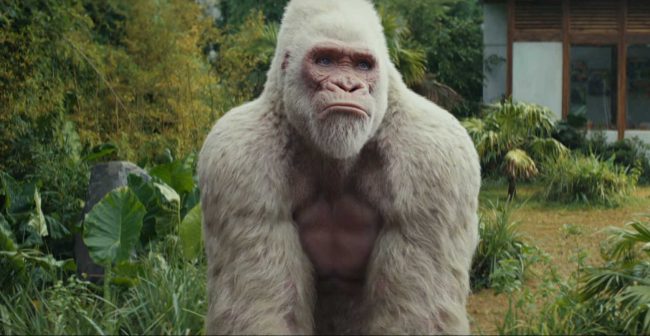 Unfortunately, there should have been less human story and more focus put on George as the main protagonist. Most people these days love animals more than humans anyway and had this film spent more time on making the audience sympathetic to the albino gorilla, you might have had something far more interesting. If you’re going to make a monster movie about destroying a city, then commit to it and spend most of the hour and forty minutes smashing stuff. Humans should have only been fodder.

I don’t mind “turn your brain off” cinema, but just like the recent Pacific Rim: Uprising flick and some of the other monster films that seem to be running roughshod in Hollywood these days, too many of them take themselves far too seriously. Make it simple. Stupid is the best plan of attack for creature features.

Overall Rampage is an average movie with subpar CGI effects, not a lot of humour, and not enough rampaging! It gets a 2.5 out of 5 from me.

Playing at a theatre near you. Rated PG-13 (for sequences of violence, action and destruction, brief language, and crude gestures). 100 minutes long.