Patriots Day is the well-crafted tribute to the first responders of the Boston Marathon Bombing.

If anyone was going to tell the story of the horrible tragedy that took place in Boston on April 15, 2013 it was Director Peter Berg.

He loves his docu-dramas and he has a knack for humanizing the stories as we saw with last year’s Deepwater Horizon and 2014’s Lone Survivor. All of which starred Mark Wahlberg who teams up with Berg once again for Patriots Day. 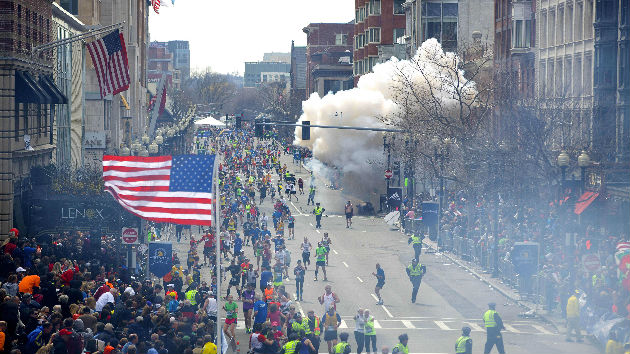 Bomb Blast at the finish line of the Boston Marathon in Patriots Day. Image: Entertainment One

It’s crazy that we are seeing films made from tragedies only a few years removed. Over the last year, we have seen movies like Deep Water Horizon, Sully and 13 Hours: The Secret Soldiers of Benghazi all of which are true stories of heroic acts that happened in the last eight years. It’s pretty risky to tell these type of stories when they are so fresh in everyone’s minds, especially if you were personally touched by the tragedy.

It takes a certain type of director who can treat the topic with care and sensitivity and stays away from over “Hollywood’izing” or exploit the story for cheap action and manufactured thrills. Berg does a great job of making a film that not only gives us a clear timeline of the events that happened but tells a touching story of a city coming together in response to a terrorist attack.

Patriots Day stars Mark Wahlberg, Kevin Bacon, John Goodman, J.K. Simmons, Jimmy O. Yang, Melissa Benoist, Themo Melikidze and Alex Wolff. It’s a perfectly cast film and for all the big names that you see on this list, it’s the performances of the lesser known actors like Melikidze and Wolff who I thought stood out.

Nothing against Kevin Bacon, John Goodman and “Marky Mark,” they can play that good guy hero stuff all day long. Themo Melikidze plays Tamerian Tsarnaev and Alex Wolff plays his younger brother Dzhokhar, the two Boston Bombers who spend four days hiding from the police. They not only look like the part, but their portrayal of the cowardly, warped, sociopaths gives us an inside look at what may have been going through the minds of these two young radicalized terrorists.  It’s rather chilling.

Director Peter Berg did a ton of research so that he could recreate the story with as much authenticity as possible. The film blends in some real footage from the security cameras and retells the story in great detail. For all of the brutality, this film brings, Berg inserts a bit of humour from time to time to relieve the tension.

Mark Wahlberg takes on the biggest role as Sgt. Tommy Saunders, who is a composite character. In fact, Sgt. Saunders is omnipresent throughout the film in that he’s always first to the scene no matter where the action takes place. If there was one thing about this movie that annoyed me the most it was that.

The believability takes a bit of a hit when I have to see the same cop always in the right place at the right time like he’s some sort of superhero who always knows where to be. I think this was done as a way to guide us to each moment of time through one character.  I understand that Wahlberg brings the star power to the film, but he should have only played a minor role similar to J.K. Simmons, Kevin Bacon and the rest of the cast. But maybe that’s just me and it’s pretty nitpicky.

One of the things you’ll appreciate the most about this movie is the sub stories. We get a glimpse into the lives of some of the survivors and their daily routine before the bombing and their lives afterward. This is where we really see a lot of the humanity instead of just a police chase. Seeing innocent people have their limbs blown off or knowing that an 8-year-old boy lost his life provides the emotional impact. 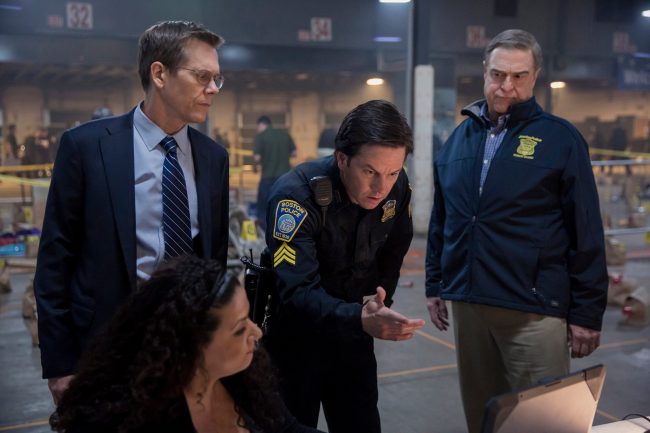 Overall this is a great retelling of one of the most horrific terrorist events on American soil since 9-11. You’ll appreciate seeing the detail and how the FBI and Boston PD were able to use technology and good old fashion police work to find the perpetrators. We get a bit more detail about the events that occurred at MIT and Waterford and there is a memorable interrogation scene between Tamerlan’s angry widow (Melissa Benoist of Supergirl) and a top secret interrogator (Khandi Alexander of CSI Miami) that will give you chills.

Despite there being too much “Marky Mark” this film is enjoyable and definitely worth a watch. I’m giving this four Boston Strong pieces of popcorn out of five.

Now playing at a theatre near you. Rated 14A and is 133 minutes.