Manchester by the Sea will blow you away with its humor, heart and humanity but it’s the performance of Casey Affleck that makes the film really float. 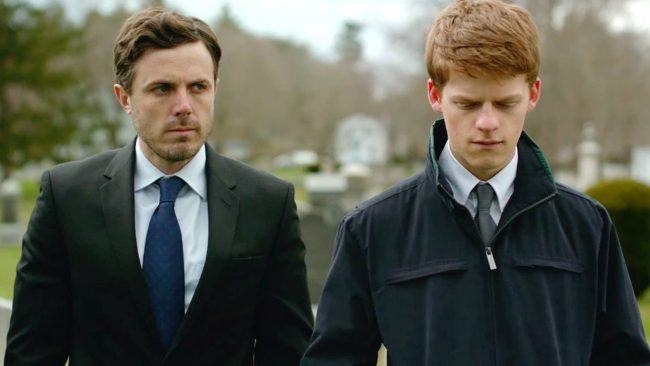 You may as well shine up that Oscar and engrave Mr. Affleck’s name on it, because there is nobody more deserving for an Academy Award for best actor this year. Nobody.

But accolades aside, Manchester by the Sea is a film about tragedy and grief, and just as you find yourself laughing at its charm, it turns around and takes a chunk out of you.

Lee Chandler (Casey Affleck) is a reclusive handyman/janitor in Boston who has to return home to the small fishing village of Manchester by the Sea, Massachusetts to bury his older brother who has died from congestive heart failure. 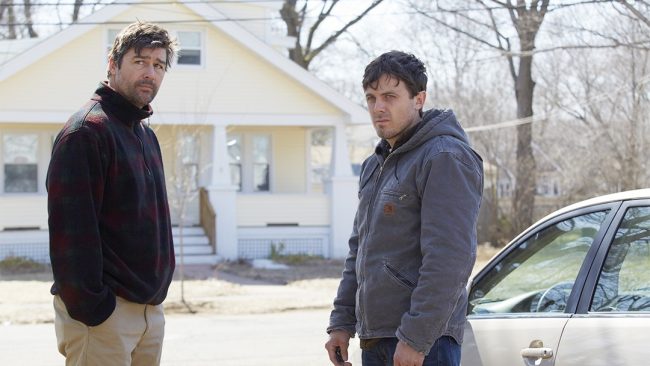 Lee, who has been living a pretty solitary and unhappy existence, has to return to a town he grew up in that doesn’t forget or forgive. It’s a place that not only harbors fishing boats but pent up grief and sadness too. All of that unravels with flashbacks, as you start to see why Lee lives his life with a chip on his shoulder. His brother’s death is just one more chip added.

As the necessary arrangements are made for the funeral, Lee is told by a lawyer that his deceased brother has named him the legal guardian of his teenage son Patrick (Lucas Hedges). Of course, this news is shocking and it brings up all kinds of emotions and feelings from his past. How can a man who acts impulsively, drinks himself silly, gets in random bar fights, and lives his life in melancholy, take care of a teenage boy who just lost his father?

I won’t say too much more because this is a film as you need to see without knowing all the details. This is a slow burn of a character study that had it been any other director or actor involved, it could have ended up being pretty conventional and formulaic. But it’s Lonergan’s vision and Affleck’s brilliance that brings this tragic tale to life. 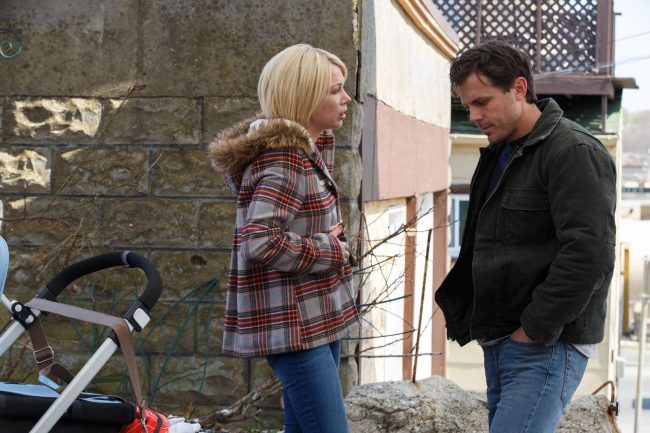 Outside of Affleck, Lucas Hedges gives a “star-is-born” type performance and it’s not out of the realm of possibility that he too gets a best supporting actor nod as well. Michelle Williams is also strong, and there is a scene near the end of the film where she slaps you around the face with her emotional range.

This movie is low on action, but high on drama. It’s brilliantly written. Nothing is force fed to you. There is no Hollywood manipulation that manufactures emotion. Everything feels authentic and real and not at all heavy-handed.

The tears and the snowflakes are so beautifully captured by cinematographer Jody Lee Lipes and the soundtrack of Handel’s Messiah only adds to the misery that is being depicted in this slice of life drama.

This is one of those films that will stick with you for days after. Many of us have dealt with death and tragedy and so there are real moments where you can understand the grief, appreciate the laughter, and know that time doesn’t necessarily heal all wounds.

Manchester by the Sea is one of the year’s best films. Go and see it because this is filmmaking at its finest.

I easily give this 5 pieces of popcorn perfection out of 5.

This film is on limited release playing at select theatres, rated R, 135 minutes