Ever since Jumanji: Welcome to the Jungle was announced by Sony, there’s been a Robin Williams-shaped void in the project. It’s a void that, for Jumanji purists, if there is such a thing, couldn’t even be filled by the casting of Dwayne “The Rock” Johnson.

To be fair to the pessimists, Sony have a wonderful recent record of murdering their own products with the likes of Ghostbusters, The Amazing Spider-Man 2, Smurfs 2, Men in Black 3, and London Has Fallen all franchise corpses. What a Christmas miracle it is then, that Jumanji: Welcome to the Jungle is a fun romp that’s even charming at times.

The movie picks up one year after the events of the original. It’s 1996 and the dreaded Jumanji game is evolving to appeal to ’90s kids who are more interested in video games than those played on a board. This upgraded Jumanji sucks in its players Tron style and dumps them inside the game within the body of an avatar. 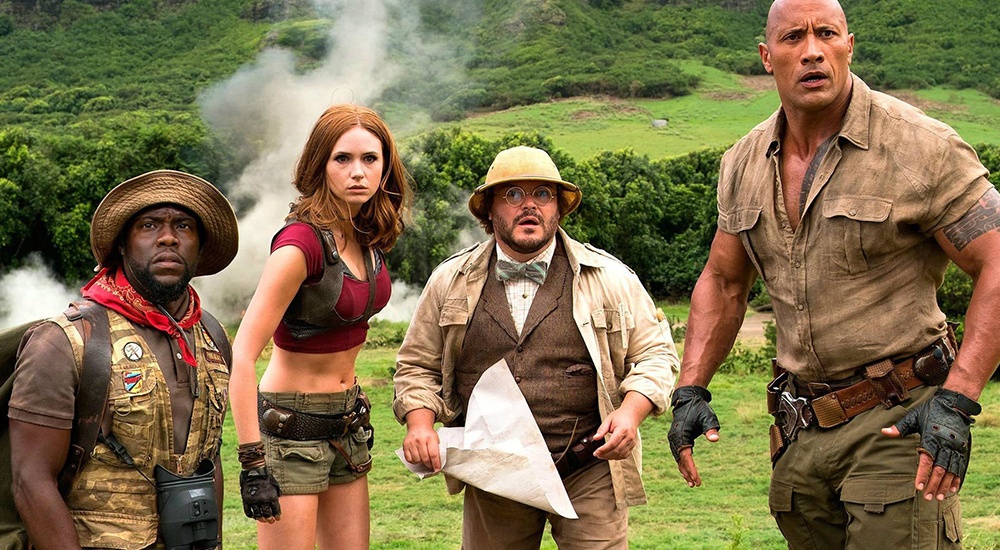 Skip forward 20 years to present day and four teen-types (Spence the nerd, Fridge the football jock, Martha the indie outsider, and Bethany the vapid airhead) discover the games console from ‘96 and give it a whirl during detention. Once they’ve chosen their avatars and pressed start, into the game they go to be replaced by their grown-up avatars for the rest of the movie.

This is really the central conceit of the film: watching the teens figure out the game from within the bodies of their adult avatars. It’s the old Freaky Friday routine. Nerd Spencer is transformed into the hulking body of The Rock’s action adventurer, Fridge the jock into vertically challenged zoologist Kevin Hart, Martha into kick-ass biologist Karen Gillan, and Bethany (to both genuine and eye rolling LOLs) into Cartographist Jack Black. If a teenage girl in the body of Jack Black is too lowbrow for you, this is your opportunity to leave.

From here on in the movie is less about the story of the game (return a jewel to a mountain, win the game) and more about the body-swap humour and how each player comes to terms with their avatar’s special skills (or lack of them). It’s to the cast’s credit that they largely commit to the Freaky Friday formula. There’s much joy to be had watching The Rock as a cowardly hypochondriac, Jack Black as a teenage instagram queen, and Karen Gillan as a shy and stumbling recluse. Kevin Hart couldn’t really care less to convince you he’s actually a teenage linebacker, instead he does his usual schtick – which is fine. 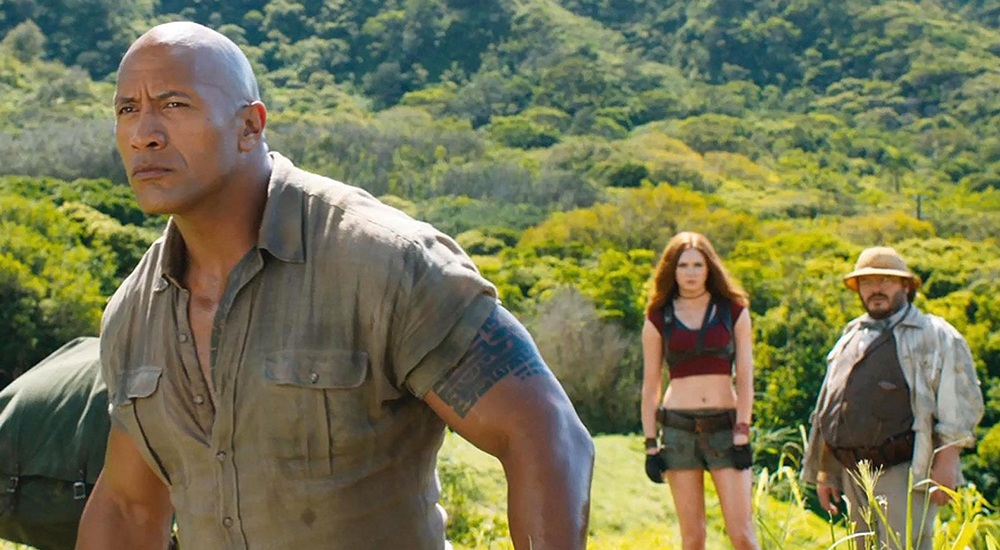 There are some genuinely great funny moments here. Jack Black’s Bethany discovering her penis for the first time is far funnier than it deserves to be. The Rock’s Spence is amazed by his muscles but terrified of everything from the temperature to squirrels. Karen Gillan’s Martha has a complete lack of social confidence but learns she can ‘dance-fight’. Gillan is perhaps the film’s MVP, doing wonders with a role, which is weirdly both subversive and compliant to the hot Lara Croft stereotype.

The biggest problem the film has is a lack of any kind of threat. The bad guy is not just forgettable, but pointless. The film would be just fine, no better, without him. To that end, the main threat to our heroes is the old three-lives tradition of video games. Each can afford to be killed twice within the game, but die a third time and.. well, game over.

While the characters are never really in any jeopardy, the three lives concept does mean we get comic kills. In the age of the comic book movie where most characters are seemingly bullet proof, it’s quite refreshing to see the characters ‘dying’ and thereby losing a life. Kevin Hart gets one particularly funny death scene based on his character’s weakness for cake. 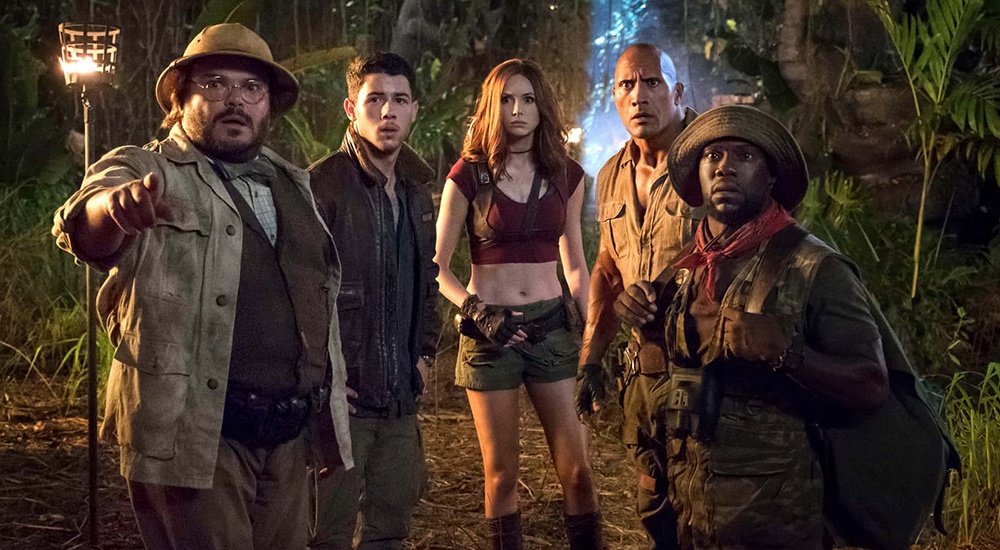 The real smart move by the filmmakers was to set most of the movie within the world of the game. Channeling Raiders of the Lost Ark and Jurassic Park they shot a lot on location (obviously there’s plenty of green screen too) in Hawaii to bring the world of Jumanji to life. It would have been all too easy to do the soft reboot sequel and simply remake the original (the Jurassic World or The Force Awakens effect). The results are varied. It’s certainly Spielberg Lite, but it works. In keeping with its love of ’80s family actioners, there’s surprisingly swearing, penis jokes, and people getting shot.

There’s a b-story involving Nick Jonas, which is a cute enough way of tying this movie to the original, and there’s a surprisingly subtle reference to Robin Williams which is commendable. You can just imagine some Sony hack pushing hard for a scene with a CGI uncanny valley Williams.

This Jumanji is a comedy thinly wrapped in the veil of an action adventure. The good news is that the comedy largely holds. It’s a fun movie, which keeps the gags coming at a fast pace. Not everything works. Jack Black’s camp performance may grate some and there’s one very awkward scene where Black teaches Gillan how to be hot by being stupid. There’s good chemistry between the leads and it’s their comic performances that keep the film moving forward through an otherwise uninteresting plot.

It’s not a huge compliment to say that this is the best movie of its type that Sony have managed in a very long time, but Jumanji: Welcome to the Jungle succeeds where it should, in being a fun family romp for the holidays.

Jumanji: Welcome to the Jungle (3D) opens in theatres on Wednesday, December 20.