Moonlight was no fluke.

If Beale Street feels superior to Moonlight, it might only be because the earlier film has afforded Jenkins a larger canvas this time out. Beale Street has more characters, narrative and exquisite designs recreating the period detail in Baldwin’s 1974 novel. Despite all that, the film is resolutely intimate, sticking close to Kiki Layne’s Tish and Stephen James’ Fonny and feeling out the contours in their love and trust, which is shared through Plexiglas while the world spins uncontrollably in the distance.

Fonny is in prison on a false rape accusation. Tish is on the outside trying to build his legal case with minimal means while expecting their child. The film opens with her breaking the pregnancy news to him before she returns to her supportive family to do the same.

This gives way to a comically crowded and unwieldy celebration that turns explosive. Tish’s parents (a quietly spectacular Regina King and a perfectly weary Colman Domingo) invite Fonny’s family to share the news over drinks. The joy becomes spiked with the future’s uncertainty and some horrifying cynicism from Fonny’s overly zealous Christian mother (Aunjanue Ellis).

From there, the film jumps back and forth in time, between scenes where Tish and Fonny’s hearts grow fonder to the legal grind when the latter is locked up and awaiting trial. Both newcomer Layne and Canada’s own James are marvellous, so perfectly in tune when together that you still feel their connection when they’re apart. 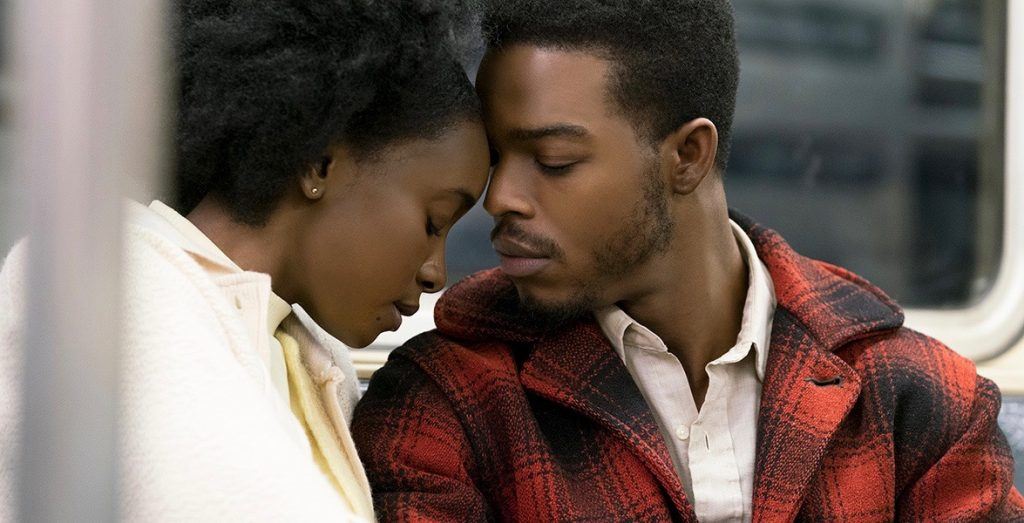 Beale Street casts no doubt that Fonny is innocent, laying out the circumstances that prove he could not have been where the victim says he was. A false rape accusation may be difficult for us to cope with, especially post-Weinstein when so many of us are still learning why it’s so important to believe victims.

There is no doubt here that the marginalized Latin woman Victoria Roberts (Emily Rios) was raped, and not just by one individual. The film validates her hurt and need for justice. But did she see her attackers or did she allow a crooked white cop (Ed Skrein) to hang her anger on Fonny?

In Beale Street, the issues being discussed through both #BlackLivesMatter and #MeToo get tangled, but Jenkins is careful to make sure they don’t oppose each other. These conversations can and must co-exist.

Fonny’s imprisonment isn’t the only moment where the weight of being black is felt. It’s there in the struggle for Fonny to find work or an apartment; in the way Tish is handled at her job working the fragrance counter at a department store; in the stories Fonny’s broken friend (a devastating turn by Brian Tyree Henry) recounts from prison; and in the archival photos that turn up during Tish’s narrations, where black bodies are regularly brutalized by the police.

Beale Street shows us these things, but often as footnotes – because what it really wants us to see is Tish and Fonny. And really SEE them. That point is underlined when Regina King’s Sharon pleads with the assault victim Victoria to just look at a photo of the couple that is also being victimized.

So much of the film is occupied by slowed down close-ups where characters stare at each other, or themselves, with soul-searching gazes, trying to see in themselves what the world outside refuses. In that way, it feels cut from the same cloth as Moonlight.

Jenkins also tends to cycle through plot quickly, settling in for long vignettes where the warmth between the couple, their friends and family cuts through.

The big moments are the small and rapturous scenes with Tish and Fonny together, sensuously photographed with James Laxton’s Wong-Kar Wai inspired cinematography. Whether on a subway platform or a rainy street, the scenery around Tish and Fonny tends to lift colours from their outfits, as if every moment and its surroundings are enveloped entirely between them.

The feelings this conjures, from beginning to end, are immense.

But will it reap any awards? Premiering at the Toronto International Film Festival is just the first stage in a conversation around Beale Street that will inevitably turn to the Oscars, which makes me hesitant.

If the film isn’t the year’s best, it will come mighty close. But it’s also the kind of story, with pleasures, nuances and an epic sweep, that regularly escapes Academy voters.

It’s too good for the Oscars, I say. But then again, I said the same thing about Moonlight.