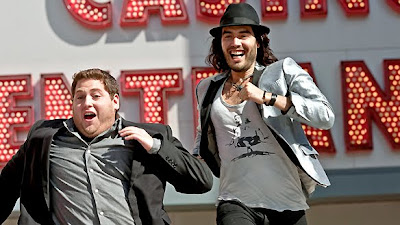 Written By: Kirk Renard (twitter: @kirkrenard)
How many of you have felt the void in your comedy-loving-heart since the passing of comedic geniuses John Candy and Chris Farley? Well you will be happy to know that they are back in the form of Jonah Hill.
I knew as soon as I saw Judd Apatow on the bill, I had to prepare my jaw for the soreness it had forgotten since watching the John Hughes movies from my childhood. Front to back it was hilarious, with an all-star cast and a breakout role from P. Diddy.
Watching Hill steal every scene from eccentric wild man Russell Brand cements the fact that “geeks are cool” comedies are here to stay. We have seen P. Diddy overact himself into an unwatchable state before, but as record label Sergio Roma he rules the screen. There is one scene in a Las Vegas suite that put me in a full body tremor as Hill, Brand, and Diddy’s characters lose their minds on a new found drug.
I loved it so much I’m saying it’s the funniest movie this year so far and can’t see anything else taking its spot by years end. Go see it and make sure you take a #1 before or you may have a problem.
But hey… what do I know I’m just some guy that likes movies.
VancityBuzz.com