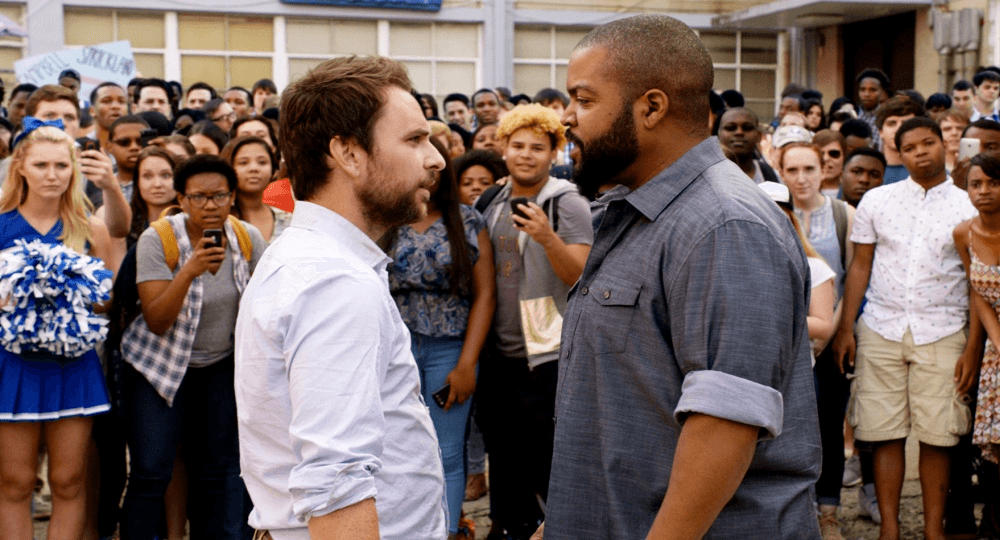 Fist Fight is about embracing the power available to you.

It’s the last day of school, and for seniors, its Prank Day.

Most of the pranks aren’t really pranks, they’re just mean, as Campbell points out when a student on a bike swoops in and takes his parking space. However, it’s a true prank that gets Campbell and Strickland into trouble. A student uses his iPhone to mess with Strickland’s VCR (the school would not get him “the Ken Burns Civil War DVDs”, nor the DVD player he wanted).

Campbell sees what the student is doing and tells Strickland, who then takes a fire axe from outside and smashes the culprit’s table to bits, but not before smashing his phone, too. As he steps away from the destruction, he reminds Campbell, “Teachers stick together.” But Campbell’s got a pregnant wife, and the school’s in the midst of picking which teachers to cut. 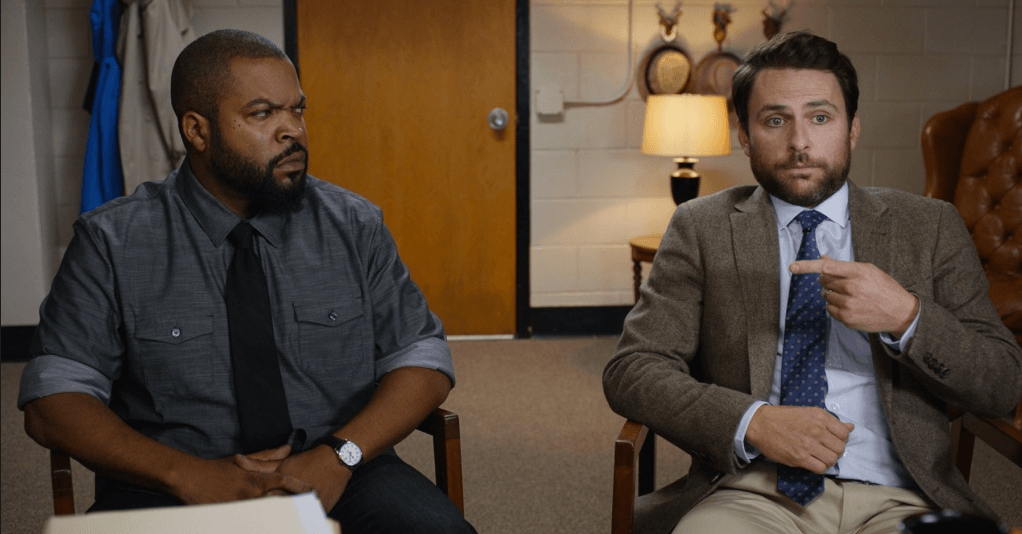 In a hilarious scene that plays up Charlie Day’s inimitable physical comedy, Campbell eventually tattles to the principal (Dean Norris). Strickland is fired, and as expected, he challenges Campbell to a fight after school. Word spreads like wildfire to the point that #Teacherfight even trends on Twitter. All Campbell can do is seek out his friends’ advice, and this is a smart decision story-wise, as Fist Fight‘s supporting characters are not only its most interesting, they’re its funniest.

Tracy Morgan plays the hapless gym coach, victim of multiple dick jokes, Jillian Bell plays a fellow teacher, one who attempts to seduce a student and smokes meth, and Kumail Nanjiani plays the school security guard, obsessed with semantics and how he can use them to avoid doing his job. Fist Fight affords these actors the chance to behave in what feels like an improvised way. They’re allowed to say outrageous things, cut people off, and get physical. 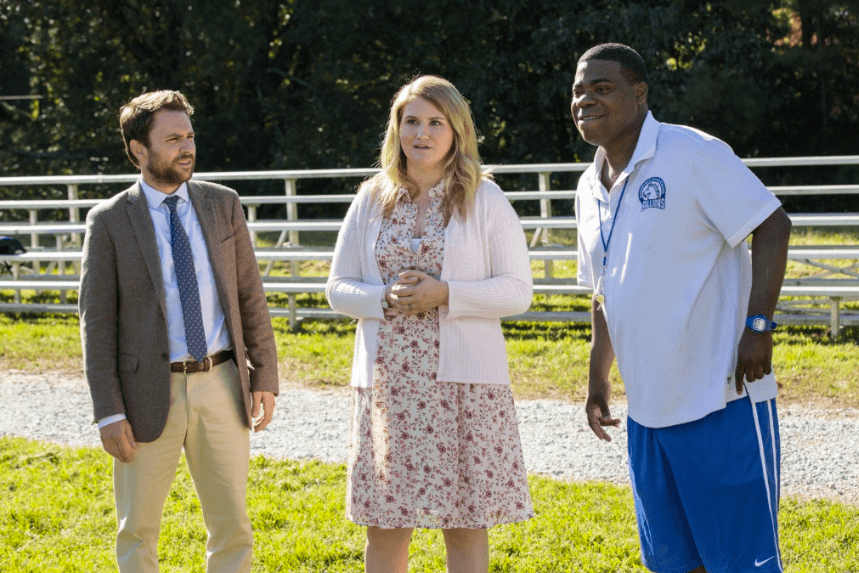 There’s not much to discuss with Ice Cube. He plays the kind of role we’re familiar with, this time with a little more swearing and a little less embarrassing situational comedy. He gets to say his famous NWA phrase. He snarls.

This all brings me back to Charlie Day. As I watched the supporting actors go at it, really go at it, I felt like Day might’ve been better cast alongside them, not above them.

Day is best left unhinged, like on his TV series It’s Always Sunny In Philadelphia. There, he yelps and twitches until his energy lifts him off the ground and he raves about rats and glue. Yet for nearly all of Fist Fight, he’s a slave to his pushover character and to the script. It’s like the movie doesn’t know what it has on its hands.

What makes his Always Sunny performances so funny is not only his physicality but his words. Without them, Day’s rendered comedically impotent, and Campbell becomes all the more disappointing for it. The thing is, this setup as a disappointment is necessary. Without its immense delayed gratification, Fist Fight‘s finale would not work as well as it does – and it works well. 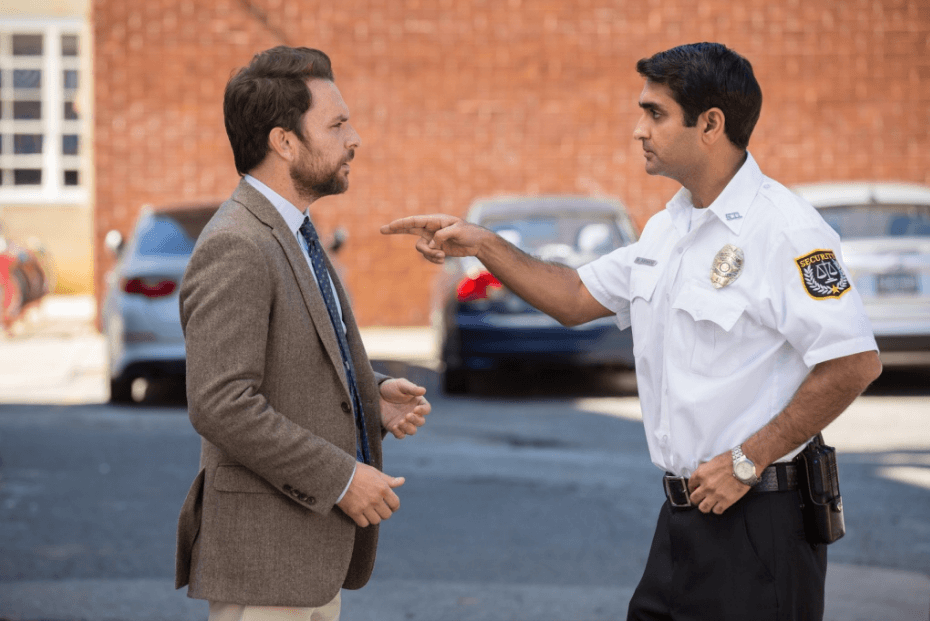 It is without a doubt the best movie fist fight I’ve ever seen. It is unforgiving, surprising, and long. It features several inanimate objects, and some creative cinematography. The best part is, the fight is only one of two long-awaited payoffs. The other features Campbell’s daughter, who herself has a bully. This makes her increasingly nervous about a performance she’s doing with her dad. This subplot lies low, but once again, its this method of storytelling that allows for grand punchlines. Without giving too much away, what eventually happens is not unlike Little Miss Sunshine’s ending.