Before Neil Armstrong lands on the moon (spoiler alert!), there’s a moment in First Man where the astronaut, played by Ryan Gosling, and his crewmates are seated in their Apollo 11 spacecraft.

They just sit there strapped in with nowhere to go, listening for instructions and waiting on a countdown relayed by radio from mission control. Their view is obstructed both by the helmets mounted on their heads and the tiny window allowing only a slit of sky to enter the tin cockpit.

It’s a narrow, claustrophobic and vulnerable perspective, where radio transmissions feel like a lifeline letting you know that someone’s still out there and you’re still alive. And the audience shares that perspective because the movie hangs our POV on Armstrong’s.

So they wait. And we wait, for an indefinite amount of time, and thoughts consume us about what comes next (an eruption); what comes eventually (the moon); what came to pass (a cockpit fire that engulfed a previous crew); and what stands to be lost (life, family, glory).

Of course, we know how things turn out. But Damien Chazzelle’s movie sets out to remind us that the headline was an uncertainty while getting us to ponder what Armstrong was thinking and feeling. He succeeds, but it’s a bumpy landing. 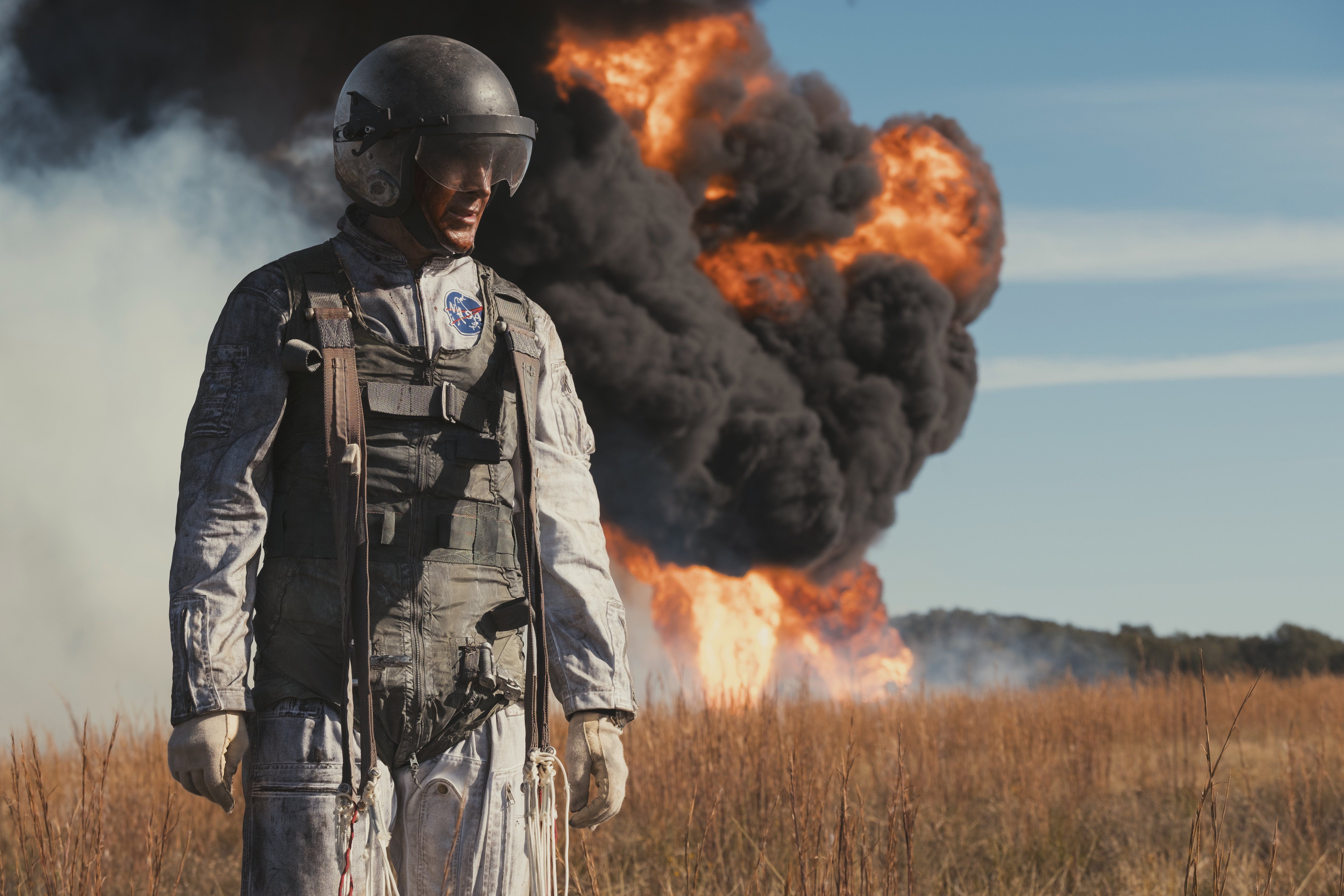 The aforementioned cockpit scene pretty much sums up First Man as a whole. The narrow perspective and the waiting are defining traits in Chazelle’s admirable endurance test. Following up on his light-footed musical La La Land, the director takes a more grounded and single-minded approach with Armstrong.

Like Dunkirk before it, First Man is yet another history lesson turned simulator experience, but this time there’s a lot of paperwork involved. The movie obsessively pours over the vectors, early missions, test runs and nuts-and-bolts details, painstakingly recreating the time and effort it took to get man on the moon before the screen pops open for the IMAX climax. 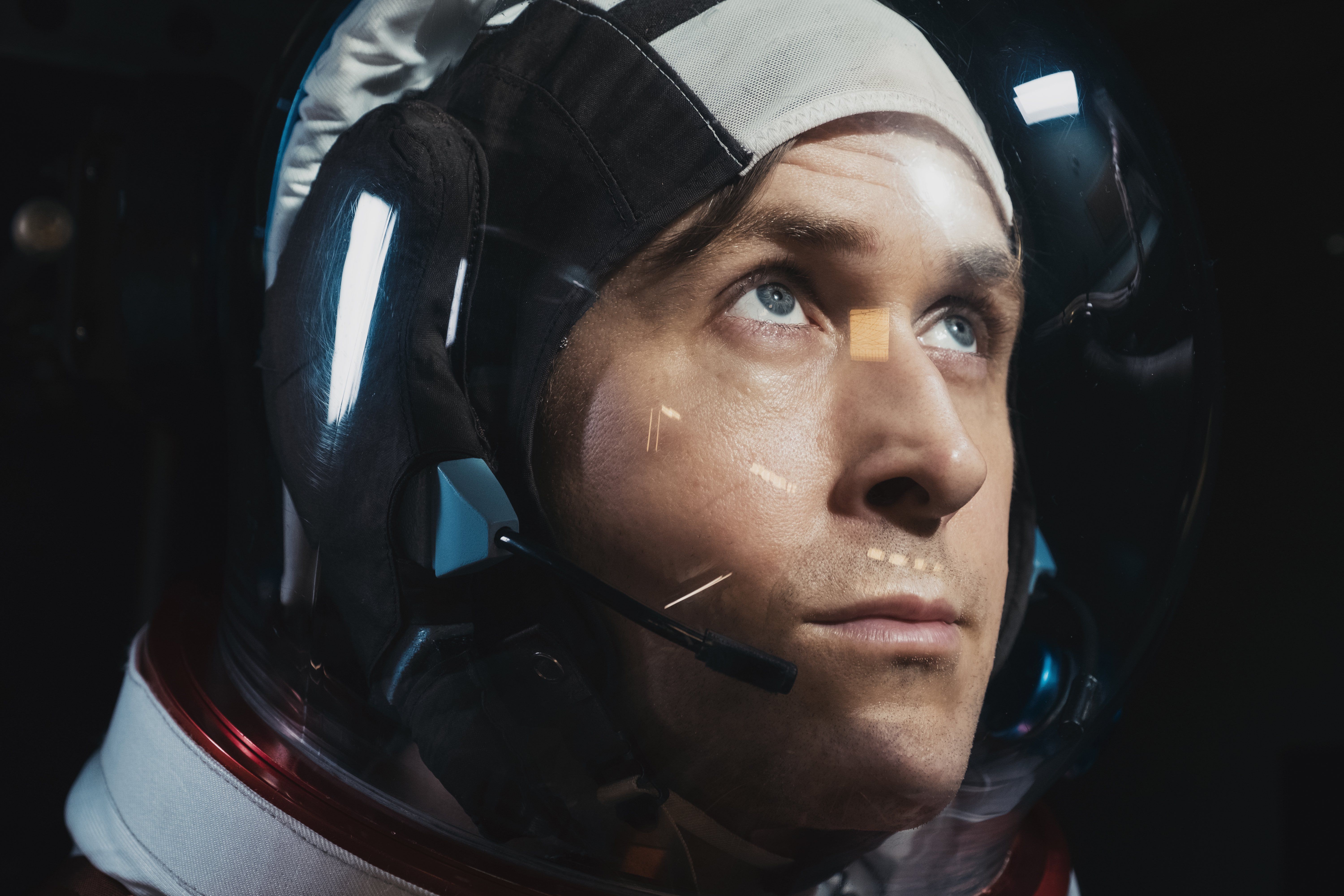 There’s nothing at all wrong with this. Chazelle regularly thrills in those bated breath moments and wows when he reaches the stratosphere.

His film is anchored to a finely measured Ryan Gosling performance, who, as Armstrong, regularly looks up with his eye on the prize, but says a lot more when he’s looking down, either to keep his nose in his work or simply deflect attention; or perhaps both purposes work in tandem.

Armstrong is known to be reserved. The film, taking some artistic license, imagines that his inward personality has a lot to do with the daughter he lost to a tumour. Grief is his defining characteristic in First Man, the only sign that Gosling’s quiet and soft-spoken Armstrong does in fact have a pulse. But that means he’s constantly keeping emotion at bay, while also avoiding anything and everything around him that isn’t moon related; this includes his own family.

The movie follows his lead. The problem with Chazelle’s singular focus on Armstrong becomes apparent when he occasionally breaks from it to glance at what’s going on in the periphery.

We get a brief interlude with civil rights activists protesting the social and economic burdens placed on Black people while their tax dollars are spent on Apollo missions. Their protests ring to the tune of Gil Scot-Heron’s “Whitey on the Moon”.

And we occasionally check in on Armstrong’s wife, Janet, played so compellingly by Claire Foy that it’s a shame we don’t get more from her. Scenes where Janet watches worryingly from the sidelines, or confronts Armstrong to answer his children before he says goodbye for maybe the very last time, are proof that there’s more interesting and dramatic material orbiting Neil Armstrong.

But those characters remain on the margins while Chazelle (as he did in Whiplash and La La Land) privileges the story of a single-minded white male reaching for the stars.

History repeats itself. So does Chazelle.