At over 29,000 feet high, Mount Everest is a natural wonder that inspires awe and fear in nearly equal measures. In May of 1996, the world’s tallest mountain claimed the lives of eight climbers following the arrival of a freak and fierce storm. Everest, a new film hitting theatres today, aims to provide a big screen memorial to those fallen climbers by portraying an unflinching adaptation of the incredible true events.

Sadly, the result isn’t quite as monumental as its titular namesake would hope to suggest. To say that it doesn’t quite reach the peak of cinematic adventure stories is as much of an understatement as it is a weak pun, but it’s an earnestly told true story that contains enough visceral thrills to make you temporarily overlook its shortcomings.

Everest centres mainly around Rob Hall (Jason Clarke), the operator of an adventure tour company that specializes in guiding amateur climbers up Everest as far as they can safely go and back again, for a handsome fee. Adored by his colleagues and by those who pay for his expertise in equal measure, Rob’s presented as a noble guy (maybe a bit too noble) who commercialized a natural wonder to those who have both a sense of adventure and a sizeable bank account.

The movie tries really hard to make it seem like Rob is an adventurer with a heart of gold, but these ideas are telegraphed so plainly and lazily by the screenplay. We know he’s an amazing human because he has a pretty wife (Keira Knightley) who’s pregnant, but any hints of true characterization are communicated solely through the talented Clarke’s performance. 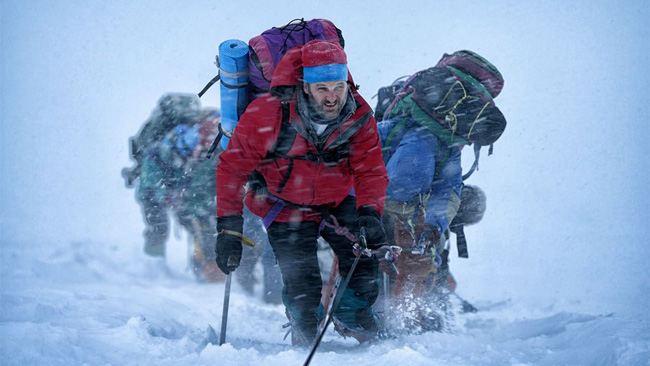 As the closest the film has to a co-lead, Josh Brolin brings his skillful touch to the role of a determined and frostbitten Texan. Jake Gyllenhaal continues his newfound wave of unexpected character acting in a part that’s too small for the abundance of energy the actor brings to it. The rest of the cast (including, but not limited to, Sam Worthington, Robin Wright, Emily Watson and John Hawkes), is uniformly strong and does their very best with what they’re given to work with, but none of the characters are provided the proper development to hook the audience with some genuine empathy.

Early in the film, outdoors writer Jon Krakauer (played by Michael Kelly from House of Cards) asks his fellow climbers the simplest of questions regarding their decision to attempt to conquer the world’s tallest mountain: why? It’s a question with an answer rooted deep within the core of what makes us human, to a degree, I suppose, and that’s far too tall of a feat for this film to tackle.

As a two-hour big screen thrill ride that doesn’t contain superheroes, alien invasions, or cars that fly, it’s adequate enough and does offer some stunning moments that managed to make my jaw drop more than once. But if you’re interested in finding the real answer at the heart of Krakauer’s question, you’d be better off investing your time in his incredible book about the disaster, Into Thin Air. You could also probably find more insight into what drives mankind to go toe-to-toe with nature by rewatching The Perfect Storm, All Is Lost, or Twister (okay, maybe not that last one).

Despite the stacked roster of character actors filling out even the tiniest of roles, the real star of Everest is the cinematography. Shot by frequent Ron Howard collaborator Salvatore Totino, the natural photography is wondrous to behold, and even the images that are obviously computer-enhanced visually astound. Seeing as how the filmmakers weren’t overly concerned with really getting to know the humans hit by the disaster, it’s a shame that early scenes chronicling the trek to basecamp and subsequent training weren’t truncated further to make room for more moments that showcase the beauty of the photography.

When the fateful storm arrives that seals many of the characters’ fates, the angry snow and loud (and I mean loud) wind truly tap into your adrenal gland, and it’s in those moments when Everest becomes terrifying. When story and character become nearly afterthoughts in the proceedings, the film would’ve been wise to double down on those moments that reinforce why, when it comes to films about Mother Nature and all her wrath, bigger is always better.

The film, as you might expect, deserves to be experienced on as large of a screen as possible. In fact, if one is even remotely curious to see the film based on its subject matter alone, it would be well worth the trip to the multiplex; a pretty frame is a pretty frame regardless of size, but Everest doesn’t exactly hold many other cards that would make it an exciting home viewing experience. If you’re able to see it in IMAX, seize the opportunity to give your senses a more thunderous thrill than they’d likely get from Everest in any other format. It’s just a shame there isn’t more for you to mentally chew on after the snow stops falling.

Rating: Three raindrops out of five.