American Ultra is a film where you check your brain at the front till of the concession and trade it in for popcorn and butter. I recommend maybe picking up some Twizzlers too. Oh, and you’ll definitely need some chocolate, man.

The slacker version of the Bourne Identity is not going to win any awards, nor is it going to be a favourite for some of the critical stuffy film snobs, but the question that most people will ask about American Ultra is “have you seen it on weed?” – Half Baked.

The film stars the likes of Jesse Eisenberg, Kristen Stewart, Topher Grace, Bill Pulman and Walton Goggins, to name a few, and there are some very interesting and fun cameos, like John Leguizamo’s role. When you see that lineup of fine thespians it’s hard not to want to see this flick. 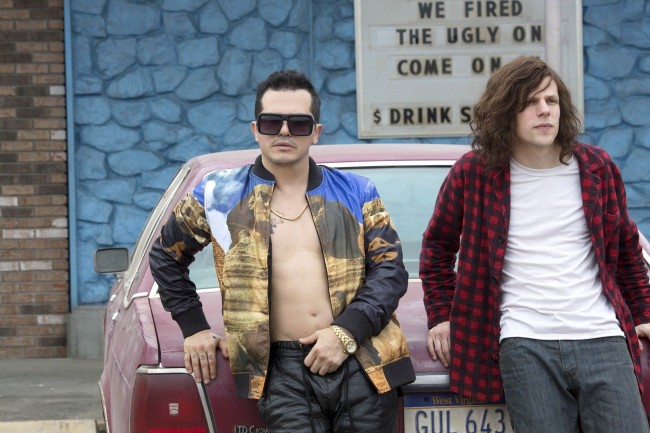 American Ultra isn’t disguising itself as a serious drama or action film. If anything, it’s like Seth Rogen directing The Long Kiss Goodnight. It’s a comedy that maybe rides slightly on the B-film side of things, but overall it’s a good time.

The story is about a guy named Mike Howell (Jesse Eisenberg) who is an unmotivated stoner who lives a fairly normal slacker life. He lives with his girlfriend Phoebe (Kristen Stewart) whom he loves and wants to eventually marry. Unfortunately for all his efforts, Mike has panic attacks where it’s impossible for him to leave town, even if it’s a dream vacation to Hawaii with his lovely Phoebe. 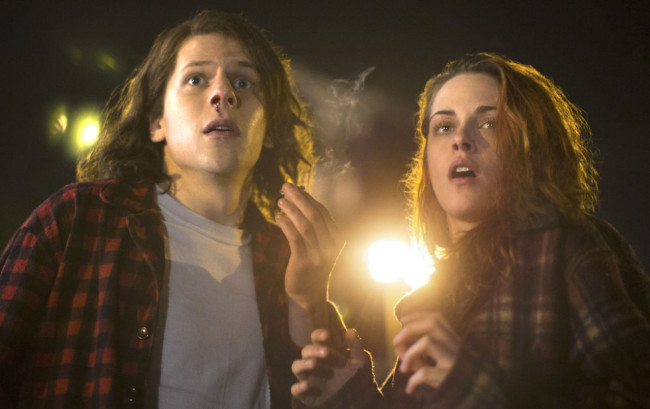 Mike’s bong gets completely turned upside down when he realizes that he’s something more than a cashier at the local Cash n’ Carry.

One night while working the night shift, a mysterious woman in a trench coat (Connie Britton) visits Mike and repeats what sounds like some sort of military code: “Chariot progressive. Listen. Mandelbrot set is in motion. Echo Choir has been breached, we are fielding the ball.”

Soon after, two men show up in the parking lot to end Mike’s life, but what they end up doing is waking up the sleeper agent inside of him. The men are put down with a few karate chops and a spoon that was meant for a Cup O’Noodles dinner. That of course sets in motion more would-be assassins coming to put Mike out of commission.

Mike and Phoebe find themselves on the run, and as the film moves forward, we get an excitable Topher Grace, who plays the head of a government agency that wants Mike dead. Topher was perfectly cast as the dickhead agent.

Without giving too much more of the story away, a few twists happen along with some big explosions. 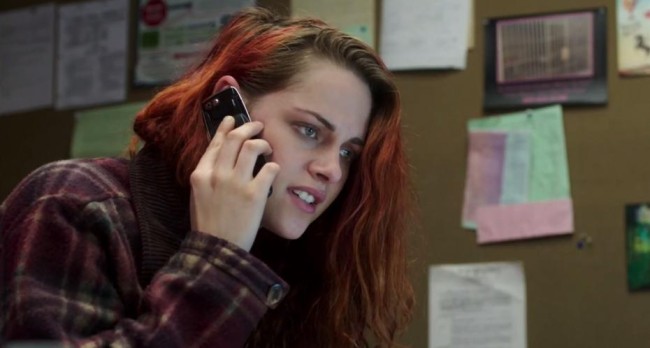 The script isn’t amazing, and, yes, we have had movies about sleeper agents before. But Stewart and Eisenberg have some fantastic chemistry, and they pretty much carry the entire film on their backs. Some of you will remember that they worked together in 2009’s Adventureland.

My opinion of Stewart as an actor has changed over the years. She has recently put out some solid work that has made me and others forget about Twilight.

Will American Ultra replace Matt Damon’s Jason Bourne? No, but it does put its own spin on the genre and doesn’t mind getting silly. If anything, this film will become a cult favourite that is probably meant for video on demand.

These types of movies always do well with a younger audience. It sort of reminded me of the 1994 film S.F.W. with Stephen Dorff (I realize I’m dating myself here). Although it’s a completely different film that was also panned by critics, S.F.W. was violent, cool and fun, which made it a favourite for young stoner punks like me back in the day. American Ultra is in the same vein.

Although I suggest other special agent films currently playing in theatres, like Mission Impossible: Rogue Nation and The Man from U.N.C.L.E., American Ultra is worth checking out on a late night trip.

I thoroughly enjoyed the film for what it was and what I can remember. I can’t really give it a big positive review with 3 out 5 raindrops, but when you do see it…see it on weed.