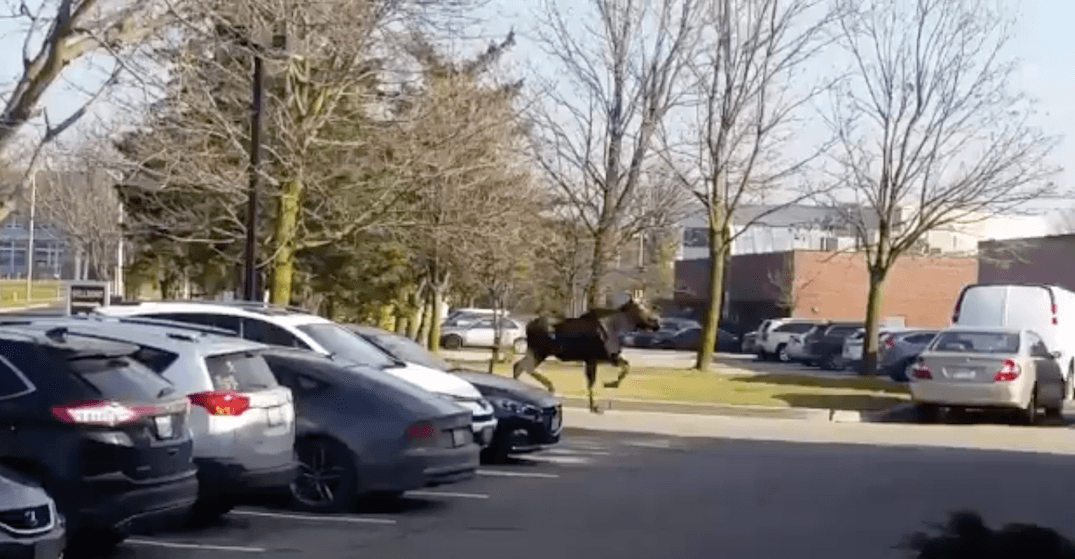 This is not a drill or a joke.

A moose is on the loose in Markham, Ontario, and it is making some major headlines.

@CP24 MOOSE ON THE LOOSE IN MARKHAM LOL pic.twitter.com/BdWo6uf3xk

Caught on cam: Moose makes a mad dash through traffic on a street in #Markham, Ont. pic.twitter.com/OfU9FX2jTH

#MooseOnTheLoose….#Hwy404 near the Buttonville Airport
Be aware, drive with caution.@ONresources assisting
Updates to follow pic.twitter.com/GQ7N2zfJNY

The moose was first spotted by a CTV News chopper and according to reports, officers are currently chasing it with tranquillizers.

Needless to say, it doesn’t get any more Canadian than this.

This is so Canadian it’s nuts. There’s a moose running around Markham and it’s being tracked by news helicopters. No white Ford Bronco involved so far (annnnd, I’ve just dated myself with that joke). pic.twitter.com/vJri8fDHFm

This “Moose on the loose” coverage on @CP24 is KILLING ME! Wall-to-wall coverage on a moose in Markham. So Canadian! #mooseontheloose

There’s a moose on the loose in Markham and there’s a live feed. This is the best day ever.

Update: According Sgt. Kerry Schmidt the moose is no longer on the highway. But no word on where it went.

Update: The #MooseOnTheLoose is no longer near the Highway, the #OPP have cleared. @YRP and @ONresources are monitoring its movements