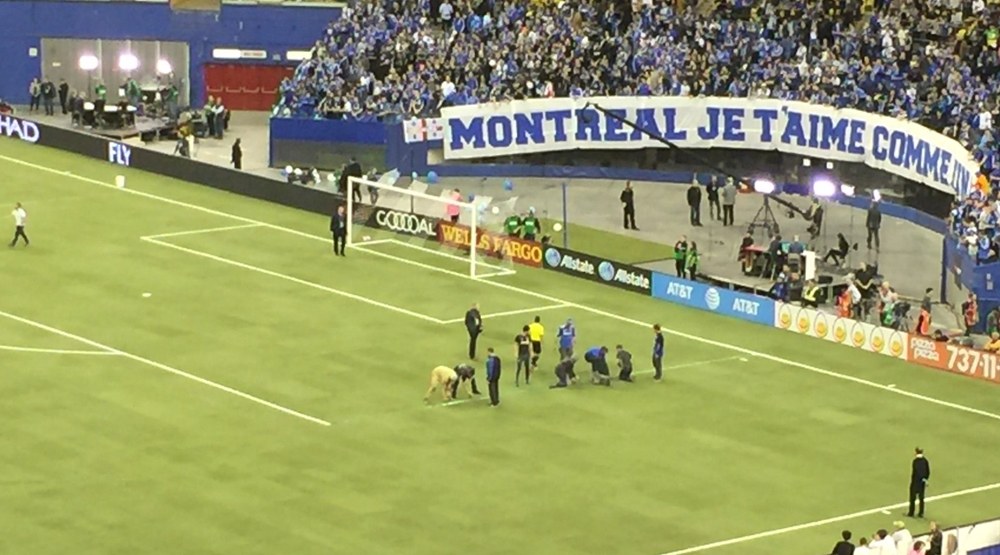 Well here’s something you don’t see every day.

This morning, Montreal Impact announced a sellout of 61,004 for the first leg of the MLS Eastern Conference Final against Toronto FC, tying a club record for the most attendance at a game.

With this in mind, the Impact advised fans to get to the Big O early as kickoff was set for 8 pm.

And then all hell broke loose.

IMPORTANT | Due to a technical problem on the field, kickoff will be delayed. #IMFC #MTLvTOR #MLSCupPlayoffs

This #MTLvTOR delay is the most Canada Soccer / MLS thing, ever.

I love it so much.

Not something you see every day – match delayed because penalty box was painted too narrow. #MTLVTOR pic.twitter.com/tbY8158zob

Anyone who ever said they’d rather watch paint dry than watch MLS … well we got a double dip for you tonight! #MTLvTOR

Looks like someone measured the lines for the penalty area incorrectly at Olympic Stadium. #MLSCupPlayoffs #MTLvTOR pic.twitter.com/trQe0xgxJ4

The guy using the leaf blower to dry the lines is not getting enough credit. #TFCLive #MTLVTOR pic.twitter.com/3613ttv61J

The one where nothing beats a fresh coat of paint! #MTLvTOR pic.twitter.com/sAtonNncxE

Delay to kick off due to Olympic Stadium not correctly painting the goal boxes on each end. Amazing #MTLvTOR #MLSCupPlayoffs

Montreal’s Olympic Stadium is not the Impact’s usual home field, as the team typically plays at neighbouring Saputo Stadium. Montreal and Toronto will play a home-and-home, with the winner on aggregate advancing to the MLS Cup Final.