Justin Rutter was last seen by his family in Ottawa on Thursday, October 8, 2009. He was 14 years old at the time, 5’4″ tall, 110 lbs., with a slim build, short light brown hair and brown eyes. Police say he was last seen wearing a light brown and white hoodie.

“Although Ottawa Police received close to 50 tips on Justin’s whereabouts over the past five years, none have been confirmed by police,” said Ottawa Police Criminal Investigations Directorate Supt. Don Sweet. “We are releasing an artist’s rendering of an age progression sketch of what Justin could look like, now at age 19.”

A recent tip suggests that Justin may be in the Vancouver area. Ottawa Police will be working with the Vancouver Police to follow-up on the information in an attempt to find Justin.

“Our Missing Persons investigators are concerned that Justin may have met with foul play or is deceased,” added Supt. Sweet. “A reward of $5,000 is being offered by Ottawa Police for information confirming the current whereabouts of Justin or leading to the arrest and prosecution of the person’s responsible for his disappearance. Someone knows where Justin is or what happened to him. Help us find him.”

Anyone with information regarding Justin Rutter’s disappearance is asked to contact the Ottawa Police Missing Persons Unit at (613) 236-1222 ext. 2355. Anonymous tips can be submitted by calling Crime Stoppers toll free at 1 (800) 222-8477. 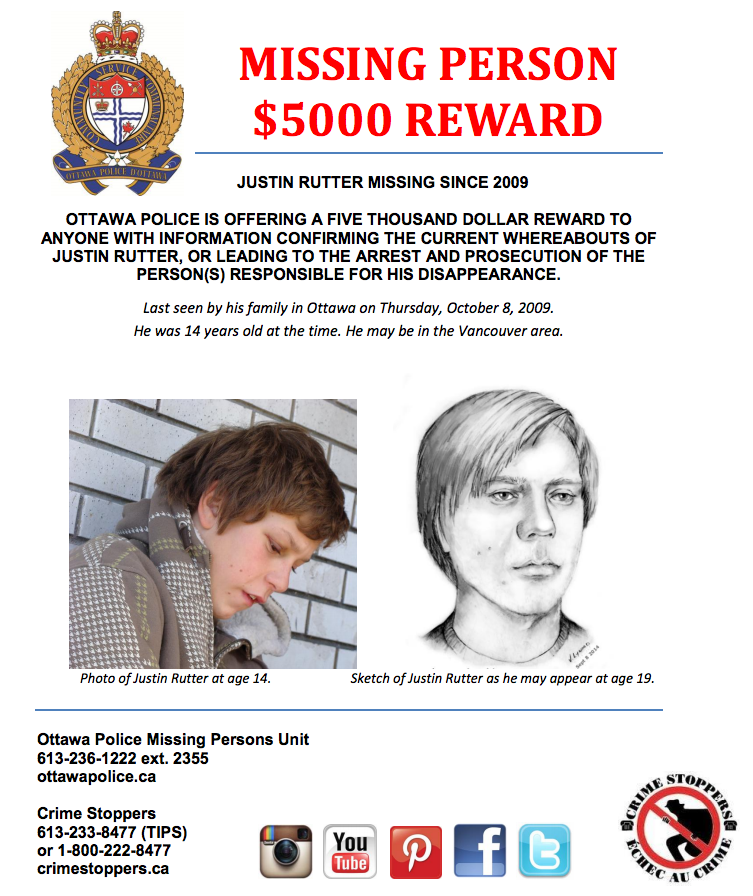