Online chatter these days often illustrates there is a long way to go before many people fully realize what an eating disorder truly is: a mental illness, or a disease of the brain.

On February 2, we published an article detailing the struggles of a 21-year-old B.C. woman who has resorted to crowd-funding to treat her severe eating disorder. Some of the publicly posted responses highlight the common misconceptions about eating disorders, so we thought we’d take a look at the kinds of misinformation that gets in the way of the good work being done to help those struggling with eating disorders.

While many of those who responded to our story were supportive of the woman’s endeavors to receive help, another fair share could not understand why her disease warranted help, let alone a news story.

The issue is complex.

For starters, there’s a fairly good chance you had no idea it’s National Eating Disorder Awareness Week. From February 1 to 7, the Provincial Eating Disorders Awareness Campaign is running multiple events and initiatives to raise understanding around the severity and pervasiveness of eating disorders in B.C. and around the world.

Buildings and structures around B.C. will be lit up purple, purple wristbands will be sold and a social media campaign called #Purple4PEDAW will hit Facebook and Twitter.

Initiatives for PEDAW around Metro Vancouver 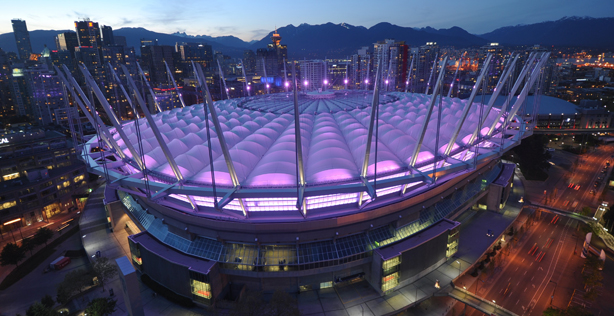 These initiatives are a fantastic way to raise awareness and get communities involved in spreading the word about eating disorders, and those with compassion and understanding will acknowledge this.

But those without the education, life experiences or personal struggles that create compassion for and understanding of eating disorders will continue to criticize the publicity of this disease. They will mumble under their breaths something like “just eat a hamburger” or whisper to their friends “she doesn’t look anorexic.”

And that is where a direct response to these comments is needed. For eating disorders to receive the support they need, the stigmatization needs to be removed and the harsh reality of the disease needs to be learned.

Here are some common misconceptions and comments made about eating disorders, along with responses to the issues from professionals:

“Having an eating disorder means having neurological or neuroanatomical organization of your brain that creates enormous barriers to eating normally. These barriers include visual and sensory distortions, impacts on reward centers and executive organization of the brain, distortions of senses of fullness and hunger, and over evaluation of body size and shape, in addition to other issues that may be present. The combination of all of these things makes eating incredibly hard to do.”

2. Just smoke weed, then you’ll get the munchies!

“We definitely want individuals to eat and digest food in order to heal their physical bodies. This being said, balance is key, so optimally they will work with supports to find ways of eating without using other substances that further promote numbing out to their present experience.”

“Suffering takes many forms. I have worked with individuals from all socio-economic realms, with some people having money for food and others not. Please choose to donate money to what moves you, but know that eating disorders are an illness cloaked in shame and secrecy. Many individuals do not get help unless their loved ones encourage them to do so, meaning that asking for support takes significant courage.”

5. There are people fighting cancer who can’t eat, and other people far worse off. Stop being so selfish and just eat.

“These kinds of statements just increase the guilt and shame of a person suffering from an eating disorder- which can lead to an increase in coping behaviours designed to avoid those uncomfortable feelings… cue the binge purge cycle or restriction!”

6. Anorexia is a serious disorder… but it’s not as bad as cancer or AIDS. We should focus on helping those people.

“Categorizing eating disorders as less deserving of support than other illnesses proves the ongoing struggle with stigmatization in our society. One outcome of struggling with an eating disorder is death. Eating disorders are the third most chronic condition among adolescent females (after asthma and obesity), yet have significantly less funding towards research and treatment.”

“Being the most lethal of psychiatric illness, eating disorders come with a number of serious health consequences, even if the individual looks “okay”. Low blood sugar, blood abnormalities (electrolyte imbalances), enamel erosion, dizziness/confusion, esophagitis, arrhythmias, acrocyanosis, edema, growth retardation in children and adolescents, and sometimes death. Eating disorders affect every system of the body, meaning that glancing at someone’s body shape does not determine the level of physical impact.”

8. You should be grateful you can afford to feed yourself. If you knew real hardship, you wouldn’t have this problem.

“Individuals who develop eating disorders are usually very sensitive.  They are physiologically more sensitive from birth than the average person. They are very in tune with the feelings of others and have a strong drive to want everyone around them to be happy. This often leads to perfectionism as they try to reduce any negativity that they or others will experience. As the disorder progresses they become caught in a vicious cycle where their attempts at being the best that they can be actually does cause others negative feelings — but at that point they can’t just stop. The attempt to be perfect is primarily a way to ensure that nothing about them will cause anyone else any distress and to ensure that others will not find fault in them, something that they are very sensitive about.”

9. Starving yourself to death is a choice, just like taking drugs or drinking too much.

“Someone can make the choice to pursue recovery, but the act of recovery itself is a lot of hard work and involves more than simply deciding to not act on symptoms. In most cases, the eating disorder has become a person’s primary way of coping with intense emotions and difficult life events.  In order to heal from the eating disorder, a person needs appropriate treatment and support regarding medical monitoring, nutritional rehabilitation as well as learning and practicing healthier ways to manage stress.”

– The Center for Eating Disorders

Resources for more information about eating disorders and where to receive help: