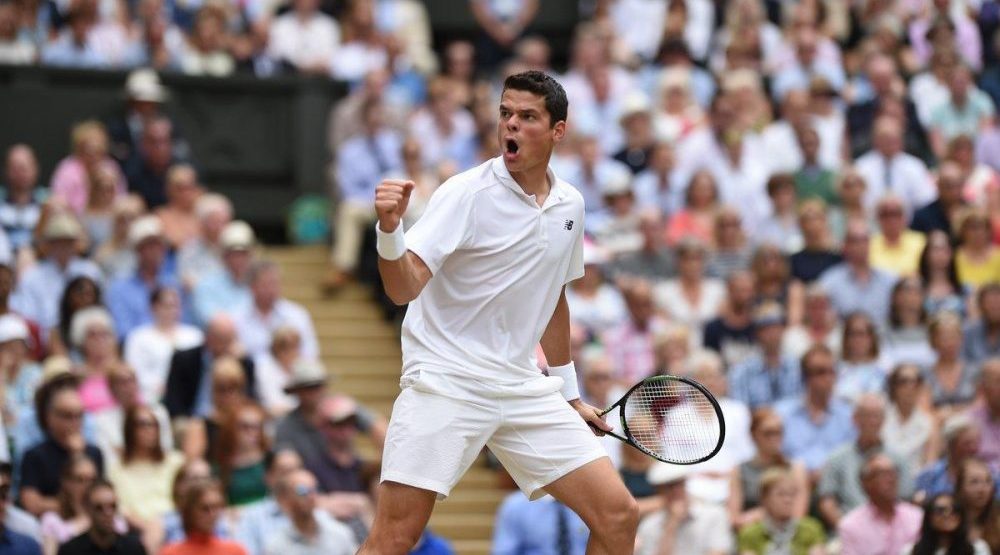 Milos Raonic will play for his first Grand Slam trophy on Sunday after defeating seven-time Wimbledon champion Roger Federer in the semi-final on Friday.

The 25-year-old Thornhill, Ontario native becomes the first male tennis player representing Canada to play in the singles final of a major tournament.

Not only will it be Raonic’s first Wimbledon final, it will be his first final of any of the four Grand Slam tournaments. He has reached the semi-finals in three previous majors.

Raonic started off well in this match, breaking Federer’s serve in the fourth game of the first set to take a 3-1 lead. The rest of the set held form and Raonic took a one set to none lead.

The second set held to form as well, with neither player breaking serve. Tied at 3-3 in the tiebreaker, Raonic double faulted to give Federer the lead. Federer didn’t look back, winning the next three points to take the second set to level the match.

In the seventh game of the third set, Federer finally broke Raonic’s serve for the first time – aided by a double fault – to take a 4-3 lead. The 34-year-old Swiss legend held on to win the set 6-4 and take a 2-1 lead in sets.

Raonic refused to fold in the fourth set, despite the pressure of playing a living legend on the biggest stage. The two men traded service games until the 12th game of the set with Raonic up 6-5. With Federer serving, up 40-15, he double faulted twice to give Raonic a chance. After four deuces, Raonic finally broke through, breaking Federer on a backhand winner.

This match would need a fifth set.

In the fourth game of the fifth set, tied at deuce, Raonic was again aided by a Federer double fault. Raonic did not waste the opportunity, winning the next point with a forehand winner to take a 3-1 lead in the fifth.

Raonic held on the rest of the way, playing the best tennis of his life, to win the set 6-3. Milos was off to the Wimbledon Final.

“It’s an incredible comeback for me really,” Raonic told the BBC after the match. “I was struggling there through the third and fourth set, he was playing some really good tennis. Just on a little little opening, I managed to turn it around and finish off in a great match.”

This is the biggest win in Canadian tennis history, a moment which was not lost on the BBC reporter after the match, asking Raonic about the impact this will have back in Canada. Raonic said simply, “Well you know, it’ll have a bigger impact if I can win.”

Raonic will play #2 seed Andy Murray in the Wimbledon Final on Sunday at 6 am Pacific Time (9 am Eastern).