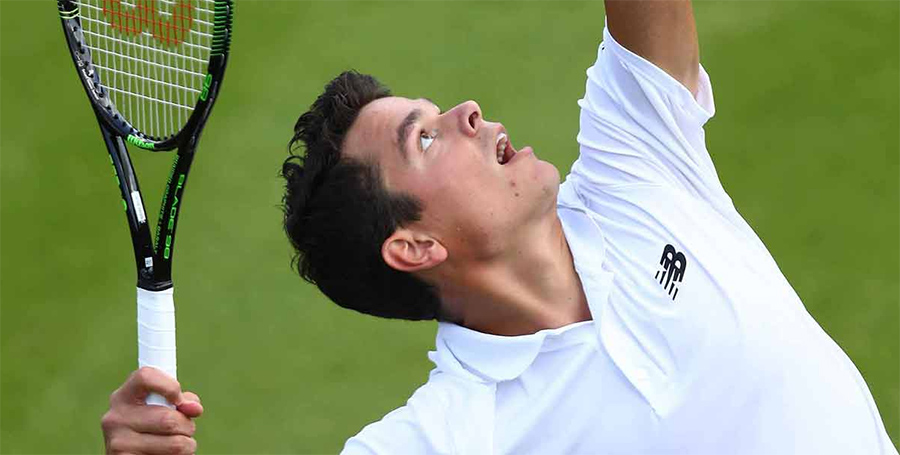 Milos Raonic is not Canada’s best hope to win a Wimbledon Championship this year.

That mantle won’t fall on Eugenie Bouchard or Vasek Pospisil either.

Felix Auger Aliassime: "I was kind of devastated after the match. But… I thought about it, and I know I have a lot of time in front of me"

Fifteen-year-old Felix Auger Aliassime, Canada’s up-and-coming superstar, will compete against other juniors as old as 17 for the junior boys’ title starting next Monday. Back to him in a moment.

On Raonic’s hopes, you can expect him to play as well as he ever has at Wimbledon. Adding John McEnroe to his coaching staff at the end of May has produced immediate results as Raonic went all the way to the final at the Queen’s Club tournament two weeks ago.

There, he won the first set against second-best player in the world, Andy Murray, before losing the next two and conceding the championship.

Raonic’s biggest hurdle at Wimbledon will be his draw – more accurately, he’s fallen into the same quarter as Novak Djokovic. While he should get to the quarter final, it’s tough to see him beating the world number one to go further.

There’s a chance, though, as McEnroe has clearly added some new strategies to Raonic’s game. Those who’ve watched Raonic closely over the years will notice a difference as he now sways from side to side awaiting his opponents’ serves, clearly hoping to put more returns into play.

He’s also playing a more patient game from the baseline while using more chips and charges – attacking the net whenever he has a chance.

Perhaps the biggest reason he couldn’t beat Murray is the Brit has reunited with Ivan Lendl, the coach with whom he partnered with to win his two grand slam championships.

If Raonic doesn’t make it past Djokovic, tennis fans can at least hope for Murray to finally push to beat him again, after losing three straight major finals to the Serb.

Meanwhile, Eugenie Bouchard will be in tough against the opponents she’s drawn. Bouchard is currently ranked 48 in the world. If she makes it to the second round, she’ll likely face 16-seed Johanna Konta, and in the third round, 19-seed Dominika Cibulkova.

She may make it to the fourth round, but there she’ll face third-seeded Agnieszka Radwanska.

With Bouchard’s recent results – she lost in the second round at Roland Garros – it’s hard to see her getting past that test.

While the draw for the boys hasn’t been released yet, Felix Auger Aliassime will be one of the favourites after getting all the way to the final of the French Open a month ago.

Anyone who’s watched Auger Aliassime play is saying he’s not only the future of Canadian tennis, but the future of tennis period.

In the French Open final, Auger Aliassime, 15, dominated 17-year-old Geoffrey Blancaneaux in the first set but lost the next two despite having chances at his own match points in the third set.

Auger Aliassime has a massive serve, firepower on both groundstroke sides similar to that of Djokovic, and spin and variety that’s reminds you of Rafael Nadal.

Perhaps more striking is his composure. During that French Open final, while Blancaneaux was up and down emotionally, yelling at his coach and even throwing his racket at one point, Auger Aliassime remained level headed even in the most tense moments.

Aside from a couple of fist pumps after winning some big points, he kept everything inside.

I’m not done with the lofty comparisons yet – the player Auger Aliassime resembles most, in the way he carries himself, is Pete Sampras.