Hide your kids and hide your wives, as bad girl Miley Cyrus is bringing her Milky Milky Milk tour to the Queen Elizabeth Theatre tonight.

Pop music’s biggest troublemaker is on the road in support of her latest album “Miley Cyrus & Her Dead Petz,” which was released for free on the singer’s website in September. Fans expecting a hits tour will surely be disappointed, as Cyrus is mostly playing tracks from the new project (save for show closer “We Can’t Stop”). What we can promise you is a show full of lasers, confetti, unicorns and at least one prosthetic penis.

Reviews of the tour have been mixed at best, but for just $69.69 (see what she did there?) you too can have the once in a lifetime opportunity to watch Miley change clothes for two hours. At various points during the evening, she’ll be dressed as a stick of butter, a carton of milk, a disco ball with 8,000 mirrored tiles glued to it, and will don a leotard, moon boots, pasties, and fake boobs. Or, you can donate the $69.69 to a deserving charity and just check out our photos and recap of the singer’s spectacle Tuesday instead.

Below is the setlist and those aren’t typos, folks – in Miley’s world, do is spelled “dooo,” freaky is “fweaky,” and bowls are “bowlzzz.” 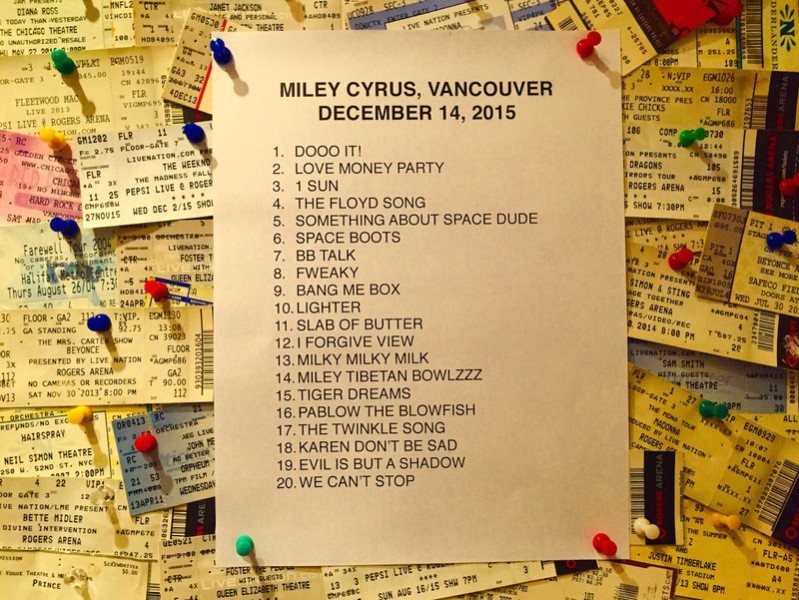