About 3,000 fans got to participate in what felt like a rave inside a Party City stockroom last night – a psychedelic show complete with balloons, confetti, a dozen or so costume changes and one prosthetic penis. More on that later.

The singer’s latest album, “Miley Cyrus & Her Dead Petz,” is a quirky collaboration with alt-rock gods The Flaming Lips, who accompanied the star on stage. The Vancouver date was just one of eight stops on what’s billed as a “club tour” in support of the album, which was released for free on her official website in September. 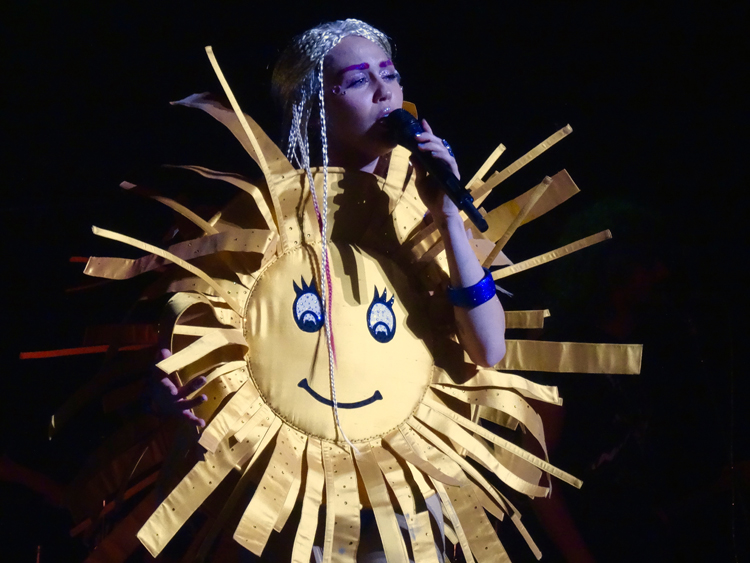 But Miley had more than sex, drugs, and rock n’ roll on her mind last night. Instead of taking the stage to an instrumental version of “Party In The U.S.A.” like she has at past shows, the singer walked out with Ian McAllister, the director and co-founder of conservation group Pacific Wild.

Pacific Wild is behind the #SaveBCWolves initiative that aims to stop B.C.’s controversial wolf cull. Cyrus made headlines earlier this year when she urged her millions of Instagram followers to sign a petition to stop the cull.

“Now this isn’t usually how I start my show. Usually I’m shaking my ass,” Cyrus told us. “A few months ago, I found a post on Instagram from Pacific Wild, talking about the trophy hunting and the wolf cull that was happening in B.C.”.

The post inspired Cyrus and her brother Braison to travel to the Great Bear Rainforest with McAllister and his group on a research trip.

McAllister who encouraged the crowd to take action. “This doesn’t have to be part of British Columbia. This is not how we deal with wildlife,” he said. Cyrus then filmed the crowd chanting “FUCK THE WOLF CULL!” and “FUCK TROPHY HUNTING!” which she then posted on her Instagram page:

“We’re doing something tonight! This is fucking awesome,” she yelled. “We’re not just coming here and taking drugs and partying like everyone thinks. We’re gonna do something that’s really fucking important.”

As for Vancouver, “this is the best show we’ve had so far,” she told us. “Except for the fact that there’s no booze in this motherfucking place! But there is backstage…”

And with that, the band started playing the chords to “Party In The U.S.A.” and the party got underway. First up was “Dooo It”, an ode to smoking pot and loving peace from the new album. Fans expecting a career retrospective were sorely disappointed as Cyrus and the boys stuck to songs from Miley Cyrus & Her Dead Petz, save for show closer “We Can’t Stop.”

The new material was a little stiff and kinda forgettable, but Cyrus was anything but. She was engaging and fun, and her voice soared to the rafters of the packed theatre. Best of all was “Pablow The Blowfish,” a song that paid tribute to one of her beloved dead petz. Cyrus, dressed as a disco ball, sat at a piano and sang about a sushi dinner where she “ordered rice, but watching my friends eat my friends ruined my appetite.”

As for sex, Miley has never been one to beat around the bush (so to speak), and Tuesday night was no exception. She sang of love and lust and even had the crowd join her in a chorus of “there’s something in the way you fuck me” during “Something About Space Dude.” 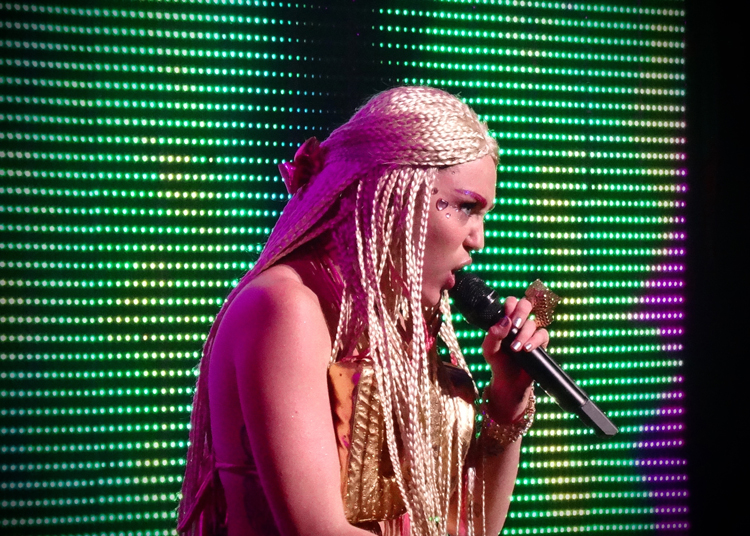 Despite not being able to get an alcoholic beverage in the venue, Miley still managed to get wrecked and have a ball. “Have you guys ever heard the saying ‘a friend with weed is a friend indeed’?” she asked. “I have a t-shirt that says that. And I’m that friend.” She then proceeded to light a joint onstage to huge cheers before (in)appropriately launching into “Lighters.”

Another show highlight was a rousing performance of “I Forgive View.” Cyrus said this song in particular marked a change in the way she makes music. “I just fucking say it and that’s how songwriting is for me now. Stop trying to think about what’s poetic and just say what the fuck I feel.” 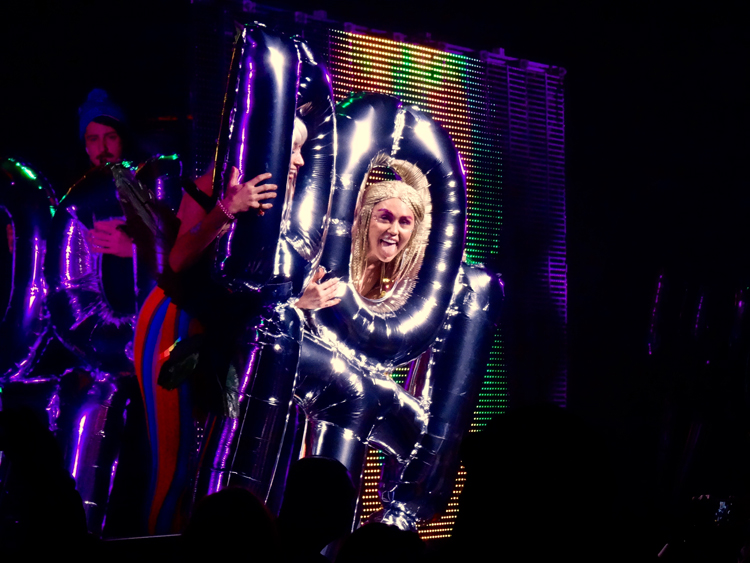 The singer also has no time for bitterness: “For as much weed as I smoke, I don’t have enough brain cells to hold in all that fucking negative shit in my head,” she said.

Cyrus finished the show with club banger “We Can’t Stop” and a final message for her Vancouver fans. “Where I’m from, in the States, we love to complain but do nothing. The reason why I went (to the Great Bear Rainforest) was because I was talking shit on my Instagram, but I hadn’t seen it. I hope you realise what a beautiful place this is, and I hope you do what you can do preserve it and respect it.”

Editor’s Note: Some photos from this article have been removed at the request of the artist’s publicist.