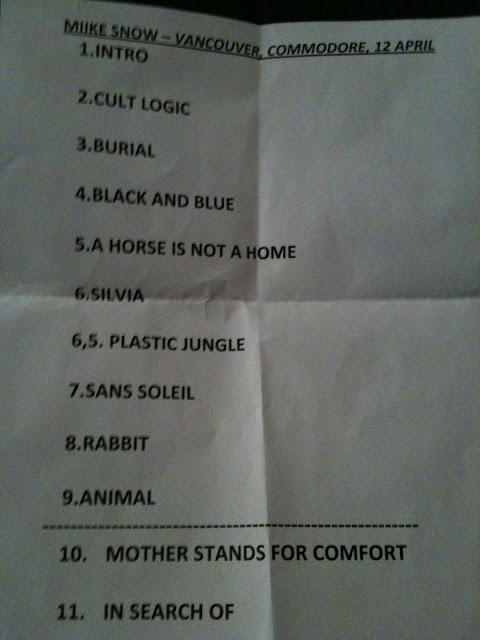 It’s been very interesting for me watching Miike Snow progress over the last year, in August I saw them play an early slot at Lollapalooza then back in Vancouver a few months later I saw them play a small but still sold out crowd at Venue and last night saw them hit a peak playing to a sold out crowd at the Commodore Ballroom. If anything is evident from this it’s that their fan base is sky rocketing and they keep getting bigger which has it’s pros and cons.
Pro – you get to watch the electronic and catchy Swedes perform their hits and sing along with hundreds of other people and see more than a few good looking girls moving their “thing”. Con – with success and radio play brings out the pseudo-music fan, heard a song on the radio got their buddies to get some cheap tickets and come to the show just to get drunk because they saw “Song for No One” on Jersey Shore. There were more than a few guys who looked like they live by the motto “GTL” and as good as is to see them embrace a new kind of sound, it really hurts me as a true music fan to hear nothing but chatter during softer songs like “Sans Soleil” which is a beautiful ballad sung about a world with no sun (hence the name). To end this little mini-rant I am just happy to say I was able to see them at the smaller venues before hand because when Miike Snow comes back to town in the future, they are only going to be playing to more people in bigger venues, this band will be huge.

On to the actual show now, Miike Snow came out wearing white masks like they typically do and started the show off with “Cult Logic” a great song to get the floor dancing and accompanied by a fantastic light show. Light shows have typically found their way out of traditional rock concerts in my opinion but Miike Snow brought it back in a big way, several times I was caught just standing looking stupid entrapped in the flashing lights. Like the times before, Miike Snow sounded perfect in concert; the singer has a strong beautiful voice that shines through the loud instrumental power houses behind him with electronica beats and indie rock & roll. The former producers get in to the music so much they are constantly jumping up and down on stage and feeding off the energy of the crowd giving it back on stage ten-fold. This time around was the first time they didn’t just stick to songs from their critically acclaimed self titled debut album and actually threw in a couple new songs which sounded fantastic. “Rabbit” a nice noise filled guitar driven song and “Mother Stands for Comfort” a long but never boring instrumental tune which when mixed with some strobe lights can be a very very dangerous song. Miike snow played almost every song off their album from the radio friendly “Sylvia” which had the entire Commodore singing along and the semi-anthemic “Animal” ending the first set of the night. How ever the thing that really draws me in to seeing Miike Snow time and time again because normally bands with so much production behind their music would play through their album on stage and just be a complete bore playing over back tracks, Miike Snow does it all live with enough fancy devices and electronics on stage to make Iron Man jealous. On top of the genuine musicianship the band shows throughout their concert, Miike Snow always adds something new to the songs; they don’t play the straight studio version and seem to thrive off turning a 3 minute indie-rock/pop song in to a 9 minute epic masterpiece.

Three times and I would still pay just about anything to go see Miike Snow again, even without a new album out they always put on a different show and like I’ve said before, if you don’t know these guys now… you will.