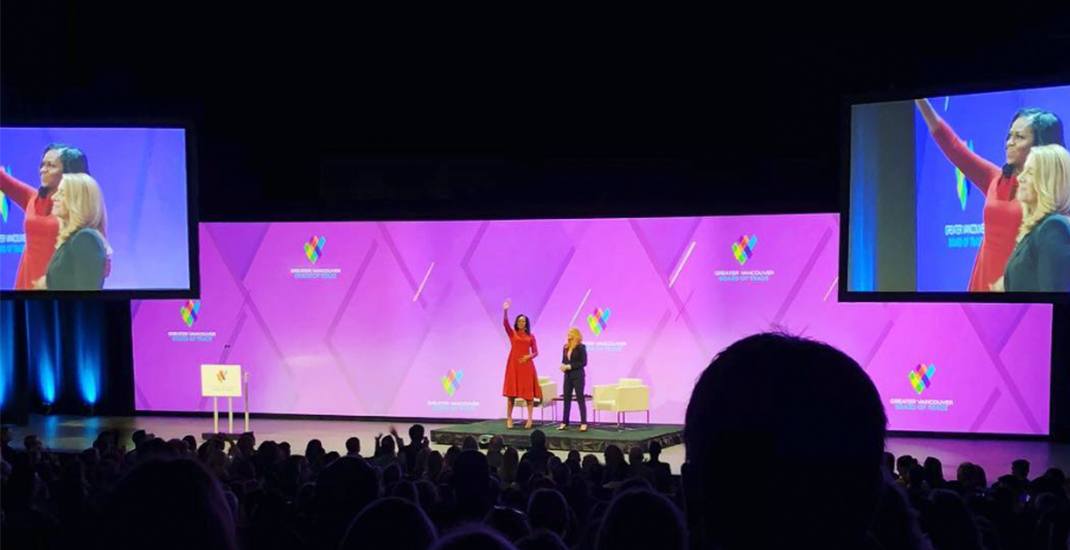 The conversation with Michelle Obama was organized by the Greater Vancouver Board of Trade, and after the first show sold out in just over an hour, a second one was added so the transformative First Lady’s message could be heard by even more Vancouverites.

Moderated by Tamara Vrooman, President and CEO of Vancity, Obama addressed the importance of exercise in order to combat childhood obesity, the importance and need for younger people to seek higher education, and her journey from Chicago to the White House.

She also addressed personal health and the need to create a balance in life, putting your life first and work second.

Obama also spoke about social media, stressing the need to think about what you’re going to post rather than tweeting the first thing that comes to mind.

Ticket holders were told photos and videos were not permitted. But that didn’t stop some…

Just a normal day at the Yulu office, listening to former US First Lady Michelle Obama talk about the importance of #education, #mentoring, being okay with failing, and putting your girlfriends first, even before date nights (with the President). @michelleobama @boardoftrade #boardoftrade

Truly an inspiring afternoon with @michelleobama ✨ My takeaway: Success is not magic. Work hard, surround yourself with good people, and stay engaged with your community #reachhigher #weforshebc #gvbot

An amazing experience to watch the Former First Lady @michelleobama talk to a packed Queen Elizabeth Theatre. What a great inspiration she is for young women, youth and children. She talked about the importance of education, connecting with her girlfriends, exercising, health and life work balance, schedule your life first and then schedule your work. As for social media her message to Young people was not to tweet the first thing on their minds, to think about what you are about to say and how it may affect others before you post. She shared Where she came from ( South Chicago ) and journey to the White House. A strong female leader. #michelleobama #barackobama #potus #flotus #usa #maliaobama #sashaobama #forevermypresident #womensmarch #forever44 #problack #feminism #colors #world #blacklivesmatter #takeaknee #mypresident #goals #issarae #michelleobamathe #obama #invictusgames #vancity #education #whitehouse #lifeworkbalance #michelleandbarack #yvr #obamafoundation #thankyouobama

Truly an inspiring afternoon with @michelleobama ✨ My takeaway: Success is not magic. Work hard, surround yourself with good people, and stay engaged with your community #reachhigher #weforshebc #gvbot