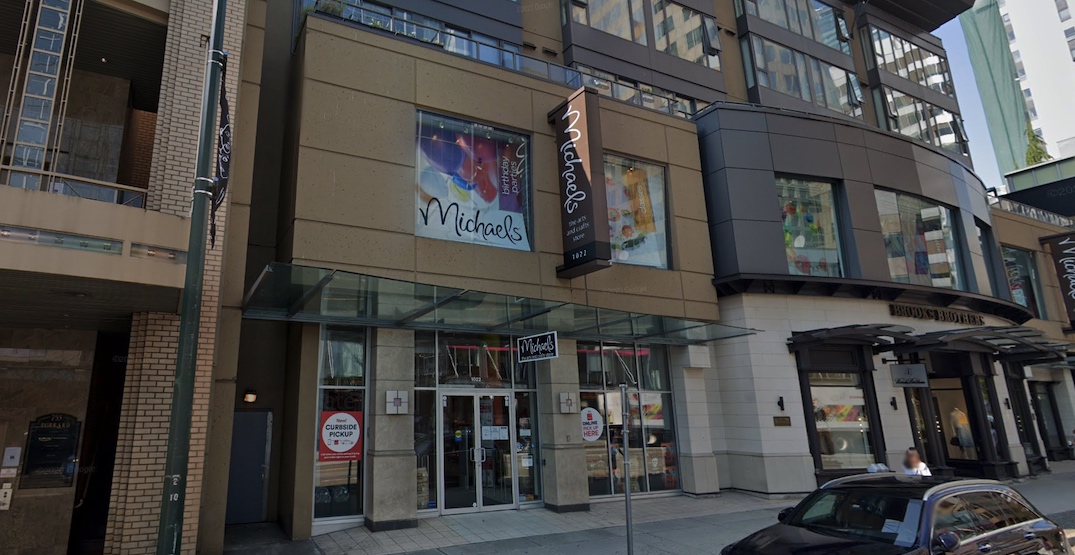 One of the last remaining non-upscale retailers within the Alberni Street luxury retail strip in downtown Vancouver is closing for good.

The Michaels store located at 1022 Alberni Street — just west of Burrard Street — is in the process of clearing its inventory ahead of its permanent closure on January 20, 2021.

This arts and crafts store, part of a Texas-based chain, occupies a significant 16,000 sq. ft. space spread over two levels at the mid-block location.

It first opened in 2012, but even at the time, this stretch of Alberni Street between Burrard Street and west of Thurlow Street was already well on the way to becoming a cluster for international luxury chains.

The departure of Michaels could potentially make way for an international luxury retailer after COVID-19.

The transition was catalyzed by Tiffany & Co.’s opening across the street in 2006, and solidified by the major renovation of The Carlyle building in 2013 at the western end of the city block for brands such as Prada, Saint Laurent, and De Beers. More recent openings in the area include Hublot, Rolex, IWC Schafhausen, and Van Cleef & Arpels.

Over the past two decades, prior to COVID-19, many global brands interested in establishing a downtown Vancouver presence have struggled with finding appropriate and centrally located retail spaces. In some cases, the lack of space in the city centre forced retailers to open their first brick-and-mortar locations in the suburbs.

According to previous market reports by CBRE and Cushman & Wakefield prior to COVID-19, Alberni Street is one of Canada’s most expensive retail streets in terms of rent, outpacing Robson Street and even Bloor Street in Toronto.

As envisioned under the West End Community Plan, the City of Vancouver has longer-term plans to provide this stretch of Alberni Street with a public realm overhaul, such as intersection improvements, mid-block pedestrian crossings, wider sidewalks, street furniture, public art, decorative specialty lighting, and event-friendly infrastructure.