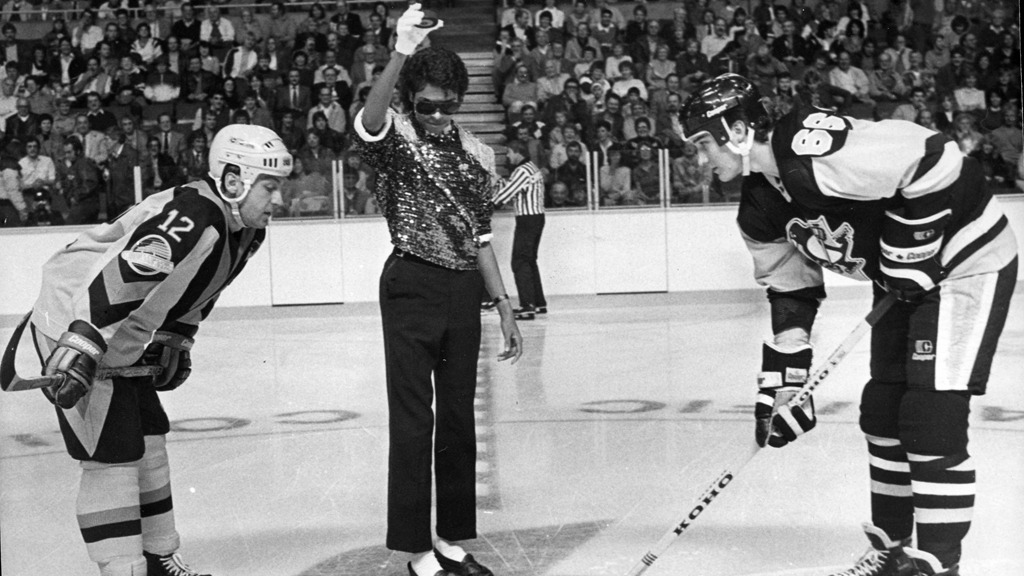 Full disclosure: Due to a website glitch, an article (not written by me) from June 27, 2013 showed an incorrect time/date of July 31, 2019 (ie. today). Horrified, I had three options: leave it, delete it, or dive back into this story feet first and rewrite it with new information!

I chose the third option.

This is probably one of the most shared photos in Vancouver Canucks history. After popular social media accounts like ‘history in pictures’ get their hands on it, that’s a given.

Michael Jackson drops the puck for a game between the Vancouver Canucks and the Pittsburgh Penguins. Vancouver, 1984 pic.twitter.com/rKEh9Hj7m4

Taken before a Vancouver Canucks 7-6 win against the Pittsburgh Penguins at the Pacific Coliseum on November 16, 1984, the image features Canucks captain Stan Smyl, Penguins rookie Mario Lemieux, and what appears to be Michael Jackson in the prime of his career.

The photo is real – the original hard copy version of it was first found by then-Canucks Image Resource Coordinator Chelsey Perrella in 2009. I know this because Chelsey is now my wife, and I was sitting next to her when she found it. So the image has not been photoshopped.

But was it really him?

Canucks reporter Derek Jory investigated it 10 years ago and wasn’t able to find conclusive evidence either way. Nobody within the organization could remember it happening – not even Smyl, who is featured in the photograph. Norm Jewison, the Canucks’ Public Relations Director at the time, also had no memories of the event.

“After a ton of emails and phone calls, extensive Internet research and even a trip to the library, we’re no closer to determining if this is really the real Michael Jackson,” Jory wrote.

Jackson was in town at the time the photo was taken, playing three shows (November 16, 17, and 18) at BC Place as part of the Vancouver stop on his 1984 Victory Tour.

But it wasn’t him. It was in fact an impersonator.

A look at the Pittsburgh Post-Gazette newspaper archives confirms this, thanks to a November 17, 1984 article written by Shelly Anderson. 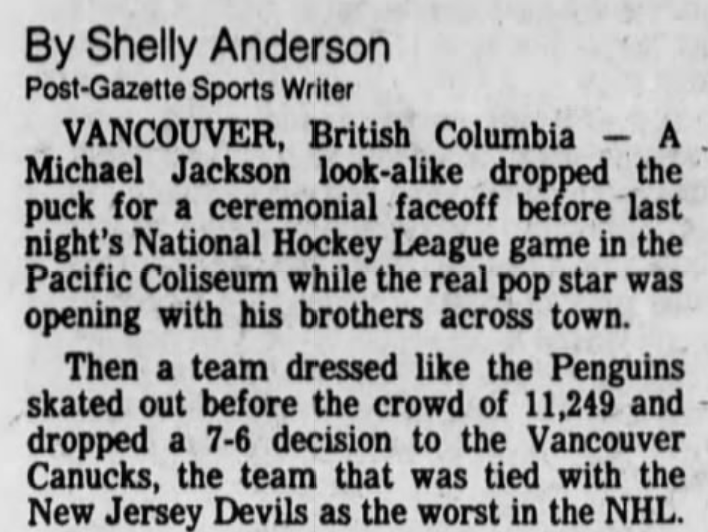 Here’s how Anderson began her post-game report, before carving the Pens for losing to the worst team in the NHL: “A Michael Jackson look-alike dropped the puck for a ceremonial faceoff before last night’s National Hockey League game in the Pacific Coliseum while the real pop star was opening with his brothers across town.”

So there you have it – it’s settled. It wasn’t him.

Now will someone tell all those history social media accounts?