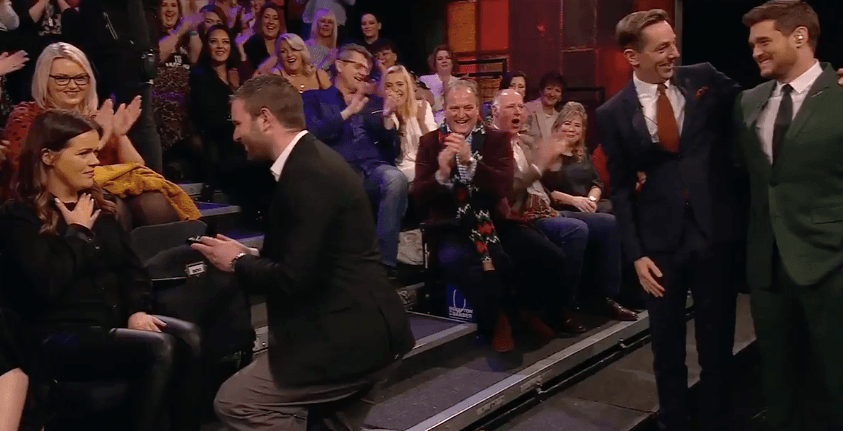 Is there anything that Michael Buble can’t do?

The Canadian artist made an appearance on The Late Late Show on Friday, December 7. During his time on the show, he gave a large helping hand in the engagement of two audience members, David O’Reagan and Ashley Kiely.

Now, to be fair, the couple had been together for six years, but having Michael Buble help out when you’re popping the question can never hurt your chances.

“I have a serious issue with a person in your audience today,” Buble explains to Ryan Tubridy, host of the program.

He stood up and proceeded to hand O’Reagan an engagement ring, while his soon-to-be fiancee stood by him, speechless.

“She’s a very special woman to me,” O’Reagan explained, just before dropping to one knee and popping the question.

Kiely nodded yes and the room exploded into applause, while Buble greeted her and handed her a large bouquet of flowers.

Congratulations to David O’Reagan and Ashley Kiely on their engagement with a little help from Michael Buble on tonight’s #latelate ❤️️ pic.twitter.com/nm7zV73IMe

“My cousin got engaged last year on the Great Wall of China and I told [O’Reagan] he had to step up his game,” she explained, still in shock.

To top it all off, Buble serenaded the couple and performed “When I Fall in Love,” a new song from his recently-released album.

And who knows, maybe if you’re lucky, you can persuade Buble to help with your engagement as well.