Aerial view of Metropolis at Metrotown shopping centre in Burnaby. (City of Burnaby)

So much of Burnaby’s identity in recent decades has gravitated around Metropolis at Metrotown, and needless to say it is not just the region’s largest shopping destination but is also amongst the largest malls in the country.

The shopping mall transformed the region’s retail landscape when it first opened 30 years ago, but the next 30 years could see even further transformation.

On Monday evening, Burnaby city council will decide on whether the city planners can continue to work with mall owner Ivanhoe Cambridge on creating a master plan for the future redevelopment of the 38-acre portion of the property owned by the company. It is expected to be approved, kicking off the first steps of planning that will lead to future rezoning and development applications.

The redevelopment would be aligned with the municipal government’s 2017-approved Metrotown Downtown Plan that spans both the mall property and surrounding areas.

“That plan established some extensive lines in the sand for how Metropolis can evolve. A couple of things in that plan were difficult for us to deal with at first, but we figured out a way to achieve the city’s objectives,” Graeme Silvera, the vice president of development for retail at Ivanhoe Cambridge, told Daily Hive in an interview.

Approved 2017 master plan for the Metrotown area in Burnaby. (City of Burnaby)

The mall is the Montreal-based company’s number-one retail property, both in terms of visitation and total sales to the extent that Silvera described it as “the crown jewel” of Ivanhoe Cambridge’s retail holdings.

A ranking of Canada’s top-performing malls also places Metropolis as the ninth most profitable mall in the country, with $1,040 of sales per sq. ft. There is over 1.7 million sq. ft. of floor area, with about 450 stores and brands, including a dozen anchor stores, and over 8,000 vehicle parking stalls. It is estimated nearly 80,000 people visit the mall to work, shop, and dine on average each day.

Although retail will still be an integral component of the future of Metropolis, there will be other core focuses of residential, hotel, and office uses, alongside supporting infrastructure, public spaces, and amenities.

“The stage was set for Ivanhoe to respond to the downtown plan when it was approved. We did a lot of soul searching, a lot of internal workshops, and we feel that we’ve developed a master plan that responds to not only the plan the city wanted, but far exceeds it in terms of sustainability, resilience, and social cohesion.

“There are a lot of principles that we’ve put forward, and we’re confident that we’ve not only met the plan but we’ve exceeded it. From the standpoint of the vision for the site, it is going to act as a real case study on how you evolve a super-regional mall into a more vibrant mixed-use community over time.” 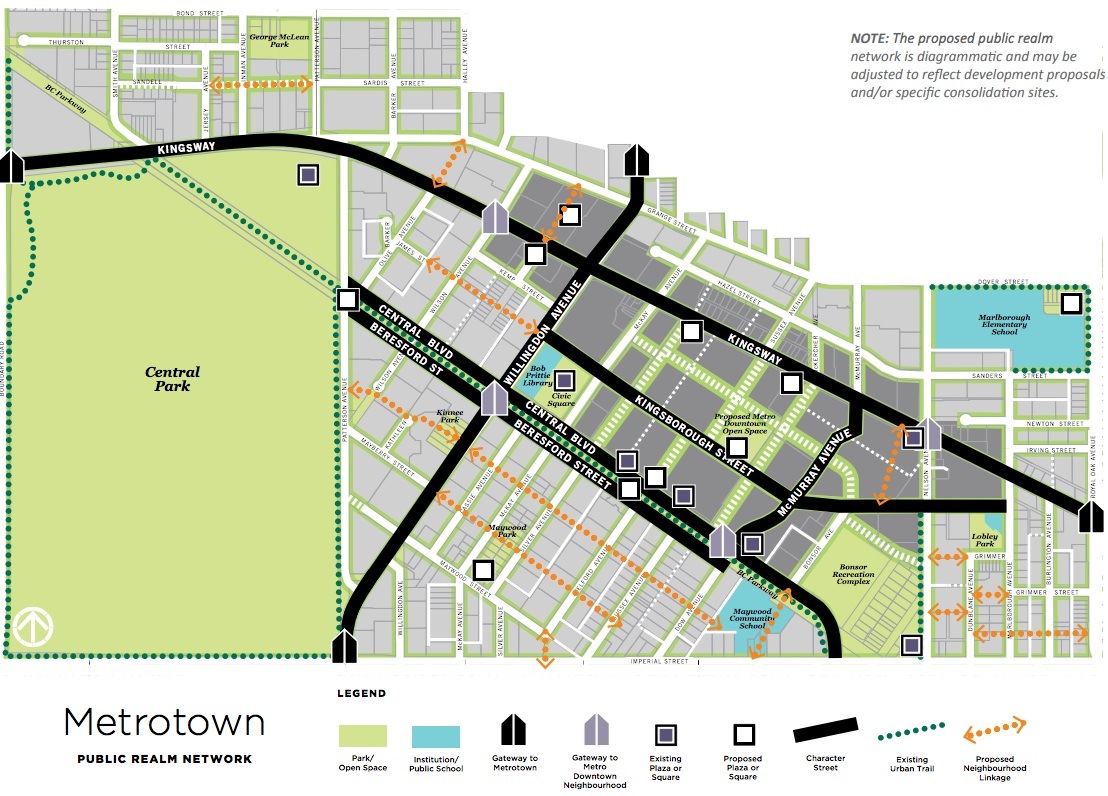 The future of the existing indoor mall

While the master plan envisions retaining an indoor mall component, much of Metropolis as it stands to day will not exist to make way for a new pedestrian-oriented street grid, with the city’s public street network extended throughout the site to create a new grid of city blocks.

There will be mixed-use buildings, mainly complete with a lower podium with retail, restaurant, and office spaces, and the towers above containing residential. A significant portion of the existing indoor retail space will be replaced with street-front retail.

“At the end of this plan, the indoor portion of the retail will be smaller. What we’re doing is we’re taking that enclosed retail and we’re transforming it over time into a mixed-use podium retail, street-front retail, where a significant portion of the enclosed mall will continue to remain in the heart of the plan,” said Silvera.

“As an example, Pacific Centre forms an essential part of the core of downtown Vancouver, where you will always have that enclosed mall portion as the heart of the plan. An enclosed mall will continue to remain as a key element, but it will be smaller, more compact, more efficient, and more productive.”

Ed Kozak, the director of planning and building for the City of Burnaby, describes the proposed future transformation as an inversion from being an internally oriented retail property to an externally oriented district that creates the new urban core of downtown Burnaby.

“We want to transform that site that invites the community to it and sets more within a neighbourhood fabric than being an insulated, interior-oriented mall that is highly cut off from the neighbourhood surrounding it,” said Kozak.

There will also be a series of public open spaces, such as parks and plazas, including a three-acre central park in the middle of the mall site that is suitable for large outdoor events and festivals.

Concurrently, the city is in the early stages of determining the feasibility of an events venue and convention centre for the mall site.

For Kozak, the first priority will be the needs of both existing and future residents in the area.

There is every intention to retain Metropolis’ function as a regional draw, but city staff want to go further and establish the area as a diverse destination instead of a place where people merely travel through, asserting there is a lack of options for Burnaby residents where they can gather and spend time.

“We’re hoping that the redevelopment of this site over time will provide or be the reason why people will come to Burnaby and stick around for a while, instead of getting to Metrotown, doing their shopping, and getting out as soon as possible,” said Kozak. 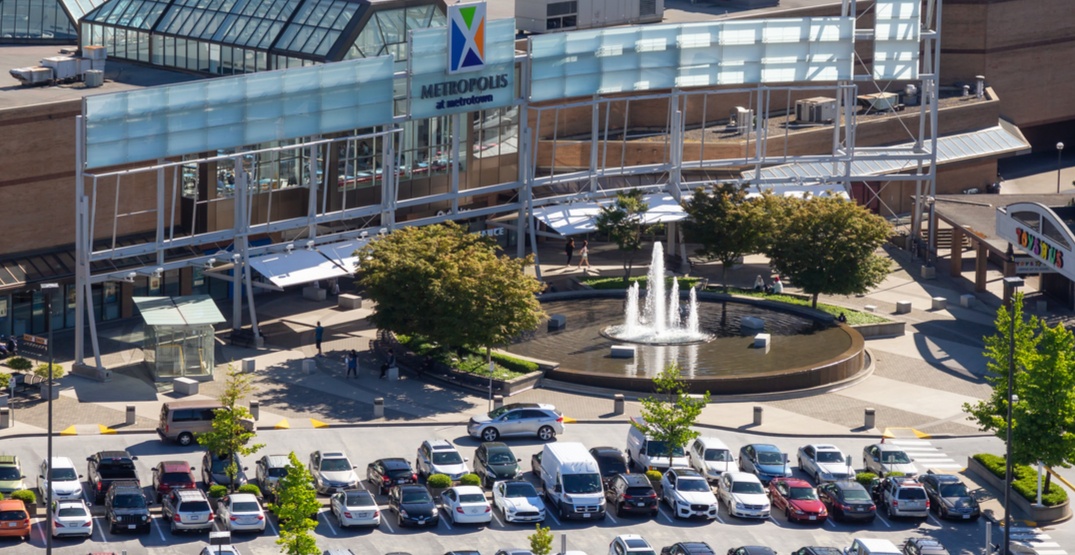 A multi-phase project over 70+ years

With that said, Metropolis in its current form is not going anywhere anytime soon, as the multi-phased redevelopment will span generations.

The sprawling property began as a Ford car manufacturing plant in the 1950s, and it was not until 1986 that the first shopping mall on the site was constructed. This was then followed by another separate mall property on the west side in 1988 by the now-defunct Eaton department store.

For more than a decade, both malls were only connected by a single pedestrian walkway over the freight access corridor between the buildings.

Then in 2005, Metropolis, previously known as Eaton Centre until the late 1990s, located on the west side of the property, was merged with Metrotown on the east side. A major mall expansion, replacing the narrow pedestrian walkway (the corridor where stores such as Aritzia and Apple are currently located), was completed to fully integrate both mall properties, adding numerous new stores and a new food court.

“The site is in really good shape in terms of the longevity of the indoor core that we’re looking to retain,” said Silvera. 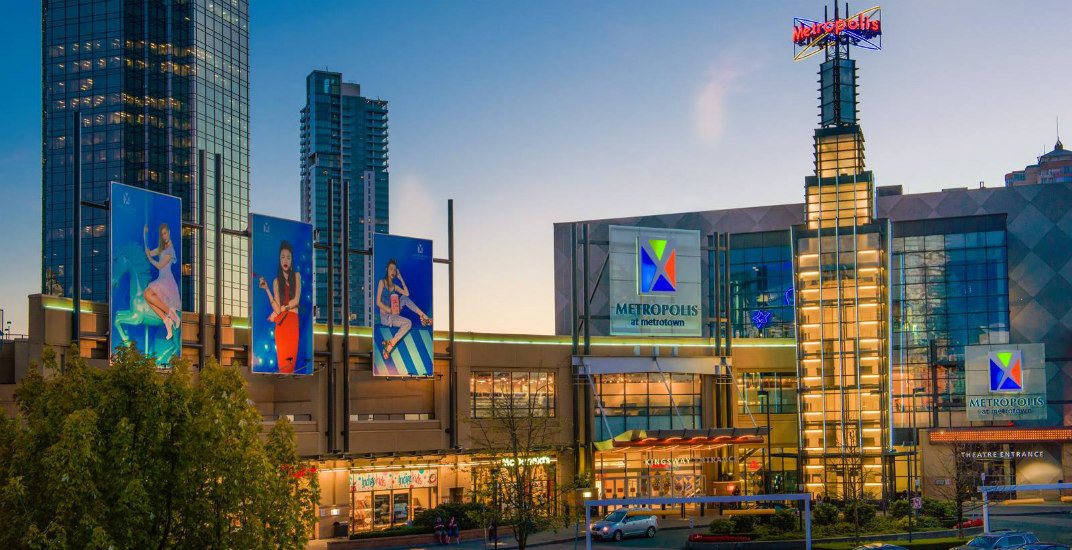 The exterior of the 1998-completed Metropolis expansion of the original Eaton Centre. (Metropolis at Metrotown)

A single-phase demolition and redevelopment is not feasible, nor is it desired, for reasons that include fluctuating market demands and the realities of various lease structures with the many retailers. It is anticipated it will take 70 years for the entire redevelopment to be realized.

Silvera says the first phase could occur in the 2020s, beginning with the construction of a new road on the north side of the mall — over ground-level and underground parking — that parallels with Kingsway.

It will provide Metropolis with an exterior face with its Kingsway frontage, creating the property’s first outdoor street-front retail shopping, along with residential uses above.

With Concord Pacific’s nine-acre redevelopment of the former Sears Metrotown site, located at the northwest corner of the mall, there will be a mix of retail and residential, including potentially the new tallest building in Metro Vancouver. 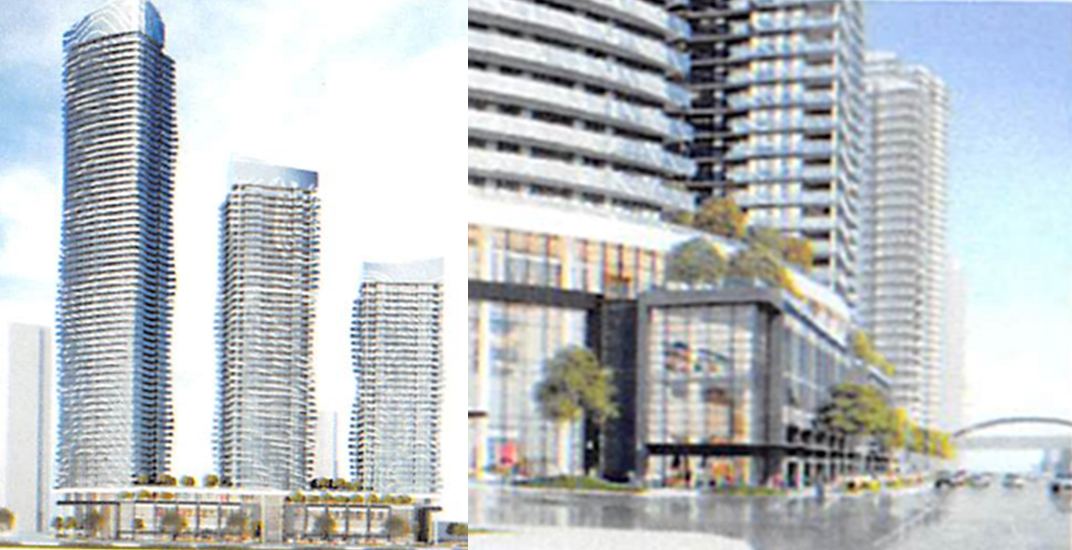 After the initial phases along the Kingsway frontage, in the 2030s there could be another redevelopment when key anchor leases expire on the southern portion of the mall.

The Cineplex Silver City theatre complex, completed in 1998 as a key part of Eaton Centre’s Metropolis expansion, will continue to exist over the medium-to-long term as the prime entertainment component of the mall.

Future retail components will have a far larger emphasis on restaurants and dining options, as well as so-called junior anchor retailers.

All phases will have an affordable housing component, and align with the municipal government’s recently implemented policy of mandating at least 20% of the units in new multi-family developments to be set aside for purpose-built rental housing. Silvera compared the amount of proposed density with the north side of False Creek built by Concord Pacific.

If the first steps of the planning process are approved by city council next week, Ivanhoe Cambridge will release its preliminary draft master plan during its initial public engagement in November.