The water restrictions in Metro Vancouver in response to this past summer’s severe drought have largely been lifted following the recent rainfall and continued forecasts of wet weather.

The Metro Vancouver Regional District announced today that water restrictions have been further downgraded from Stage 2 to Stage 1. The changes are effective immediately.

The combined water storage levels for Capilano, Seymour and Coquitlam reservoirs are now above 2014 levels and well within the normal range at this time of year. 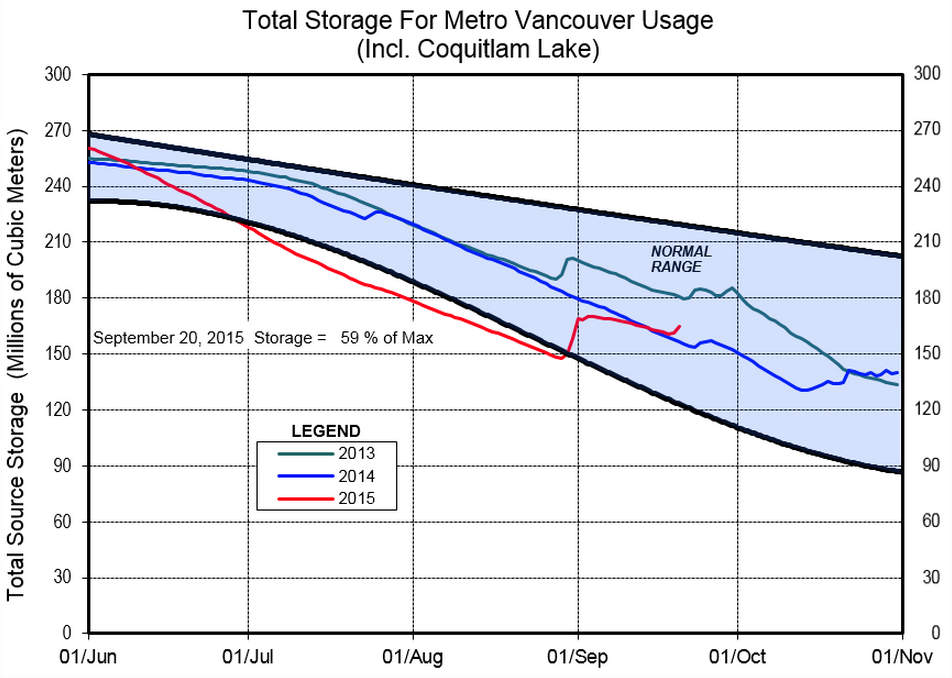 With a Stage 1 water restriction level, both residential and non-residential lawns can now be watered three times a week and public water features and fountains can be refilled and reactivated.

Here is a full list of the changes that come with Stage 1 water restrictions:

The historic drought began in May and ended in late-August, with Stage 2 restrictions enacted on July 3 and Stage 3 restrictions shortly after on July 20.

This summer’s highest recorded water consumption was on July 2 when 1.7 billion litres were used. On that day, a temperature high of 24.6°C was recorded by the water in Vancouver, with even higher temperatures inland.

In addition to hot water and a lack of rainfall, snowpacks in the region’s mountains were almost non-existent following a winter that had warm temperatures and very little snow.

Snowpacks typically act as ‘stored water’ that replenishes reservoir levels during the summer months when there is less rain.

Water restrictions were downgraded from Stage 3 to Stage 2 on September 9.