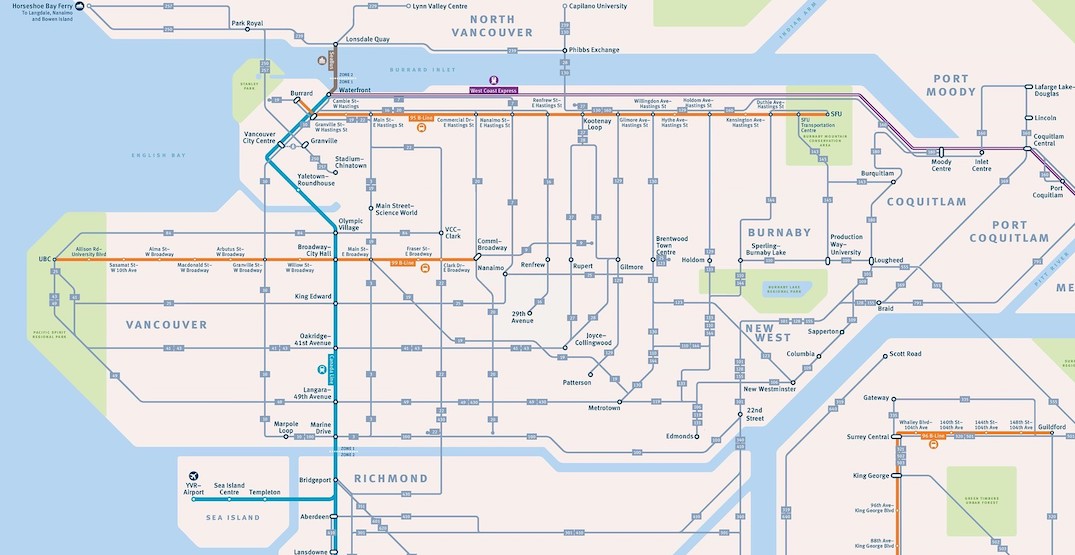 Beginning tomorrow, if CUPE 7000 and TransLink subsidiary BC Rapid Transit Company are unable to reach a deal, Metro Vancouver’s public transit network will be without two of its arterial backbone links that transport the masses at high speeds and frequencies from one end of the region to the other.

The labour action resulting in a complete shutdown of SkyTrain’s Expo Line and Millennium Line is slated to begin at 5 am Tuesday and end at 5 am Friday. The Canada Line, operated privately by ProTrans BC under contract, is unaffected and will operate with regular service.

TransLink announced this morning there will be no increase to bus services during the shutdown due to “operational constraints and labour considerations.”

“Bus service will be operating as it would on any regular weekday,” said Michael McDaniel, president of TransLink subsidiary Coast Mountain Bus Company.

On an average weekday, approximately 350,000 boardings are recorded on the Expo and Millennium lines combined, across 60 km of track and 38 stations.

Currently, excluding the Canada Line, both the Expo and Millennium lines account for approximately 25% of the entire region’s transit ridership, and about half of all SkyTrain ridership is from buses funnelling passengers into stations. 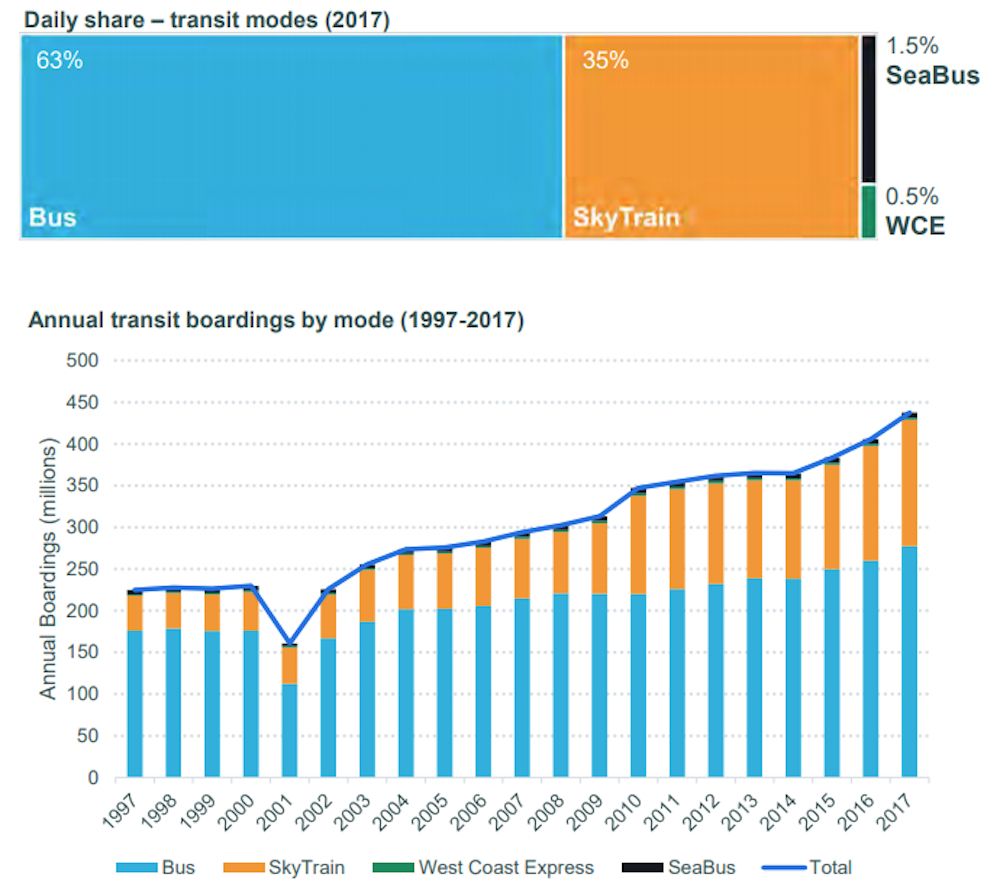 Even if TransLink were able to overcome bus driver labour restrictions and operate a bus bridge shuttle service between the stations, the resulting temporary services would be nowhere near the capacity equivalent of SkyTrain.

The Expo Line’s busiest segment during the morning peak hour rush transports 15,000 passengers per hour per direction (pphpd). In comparison, the 99 B-Line, the region’s highest-capacity and busiest bus route, transports 2,000 pphpd during the peak periods — achieved with the use of approximately 50 articulated buses over a 14-km-long route.

So, theoretically, you would need roughly 400 articulated buses to provide the 99 B-Line with a capacity equivalent to the Expo Line at peak hour. And that is greater than the number of all of the articulated buses and spare buses that exist in the fleet during weekday operations.

With that said, without the train services or any bus bridge shuttle service replicating the affected SkyTrain lines, much of the region’s public transit network will simply be unusable.

Under normal conditions, bus routes terminating at stations dump loads of passengers for their remaining transit journey by train. But with the shutdown of the Expo and Millennium lines, these bus routes will essentially be dumping passengers at dead ends.

It can be expected that many bus routes will be far busier than usual, while many others could potentially see significantly less ridership without the transfer to the trains.

For instance, Metrotown Station’s bus loop, one of the region’s busiest bus exchanges, sees 25,000 bus boardings per day. Many of these bus passengers are transferring to and from the Expo Line station.

As another example, the vast majority of the ridership that begins on the 99 B-Line from the bus route’s eastern terminus at Commercial-Broadway Station is from the constant flow of passengers supplied by the Expo and Millennium lines. But that train ridership tap is set to be turned off.

Rail passenger volumes on the station segments of SkyTrain’s Expo and Millennium lines. Click on the image for an enlarged version. (TransLink)

Overall, while still highly disruptive, the shutdown of the Expo and Millennium lines will be less impactful than the planned but cancelled shutdown of bus and SeaBus services, but certain subregions of Metro Vancouver will be more affected than others, specifically those who depend on transit in the South of Fraser.

The Expo Line via Skybridge is the primary route for transit riders travelling from Surrey and Langley to Burnaby, New Westminster, Vancouver, and the Tri-Cities. According to TransLink data, the segment of the Expo Line across the Fraser River between Scott Road Station and Columbia Station sees 72,000 passengers on an average weekday.

For South of Fraser transit riders, their main alternative is likely to drive and/or carpool.

A secondary alternative for those travelling from the South of Fraser is to take the Canada Line via a connection by bus to Bridgeport Station.

Over in the Tri-Cities, without the Millennium Line, greater passenger volumes can be expected at the West Coast Express’ stations of Moody Centre, Coquitlam Central, and Port Coquitlam.

Here are the remaining major routes on Metro Vancouver’s transit system map, without the Expo and Millennium lines (note that this map does not include many secondary bus routes): 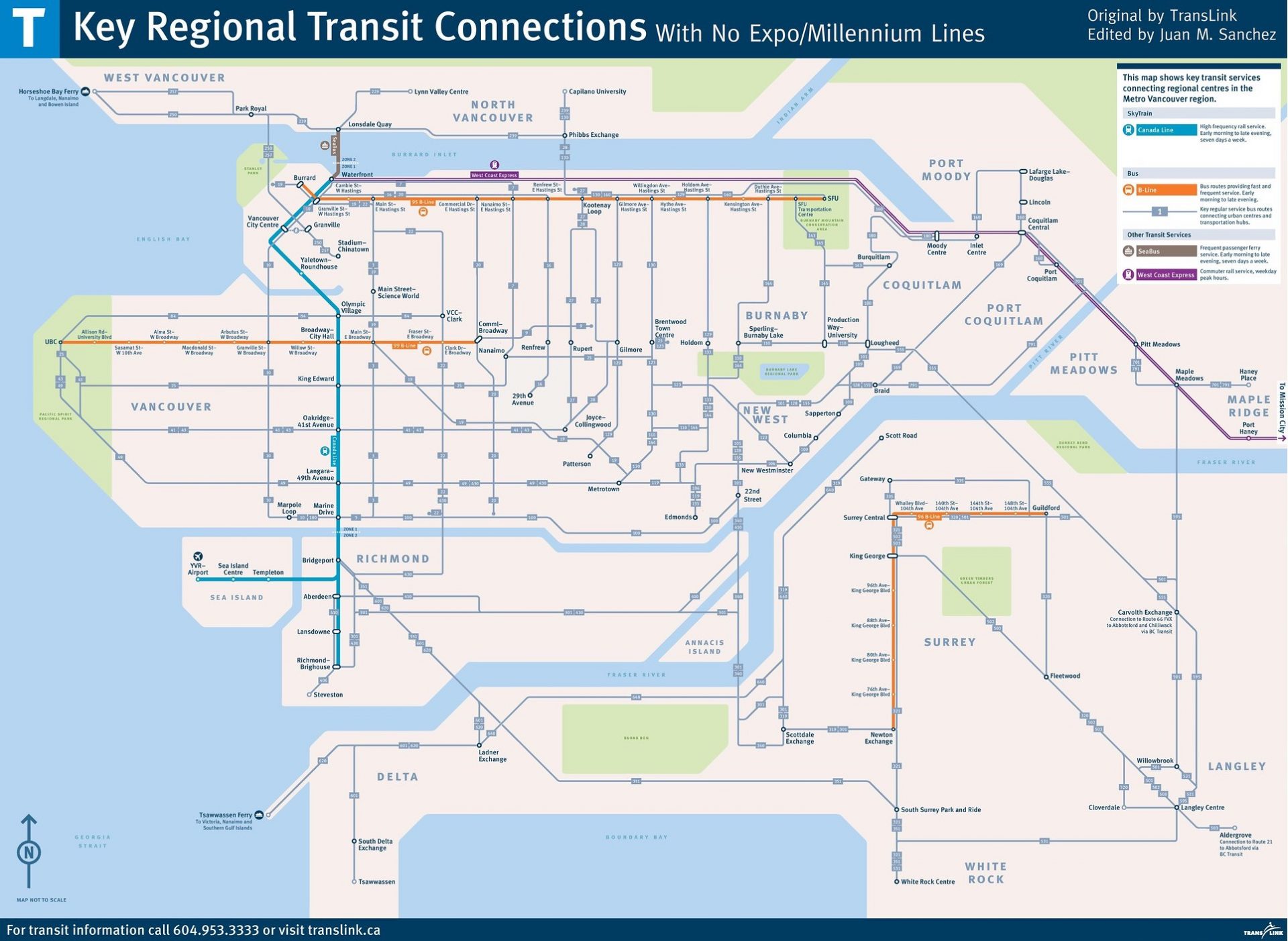 Map of the major routes on TransLink’s public transit network during the December 2019 shutdown of SkyTrain’s Expo and Millennium lines. Secondary and minor routes are not included in this depiction. Click on the image for an enlarged version. (Juan M. Sanchez / submitted)

Here is the full map of TransLink’s public transit system: 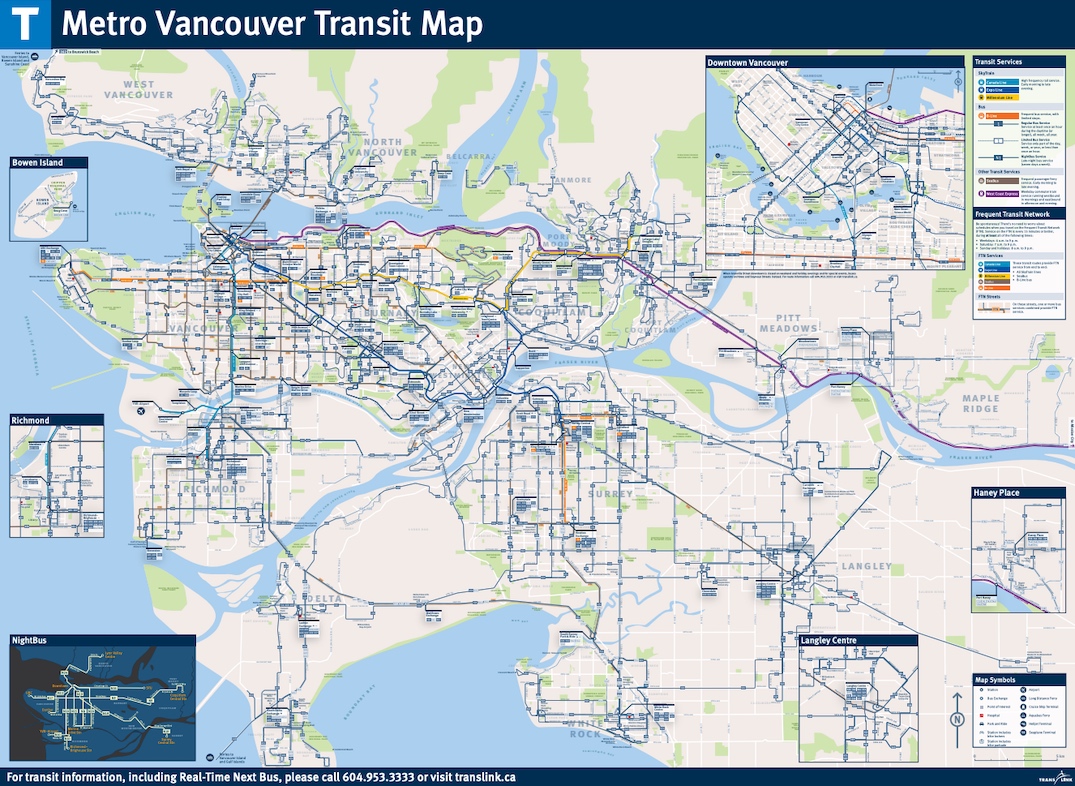 Full map of TransLink’s public transit system. Click on the image for a PDF version. (TransLink)