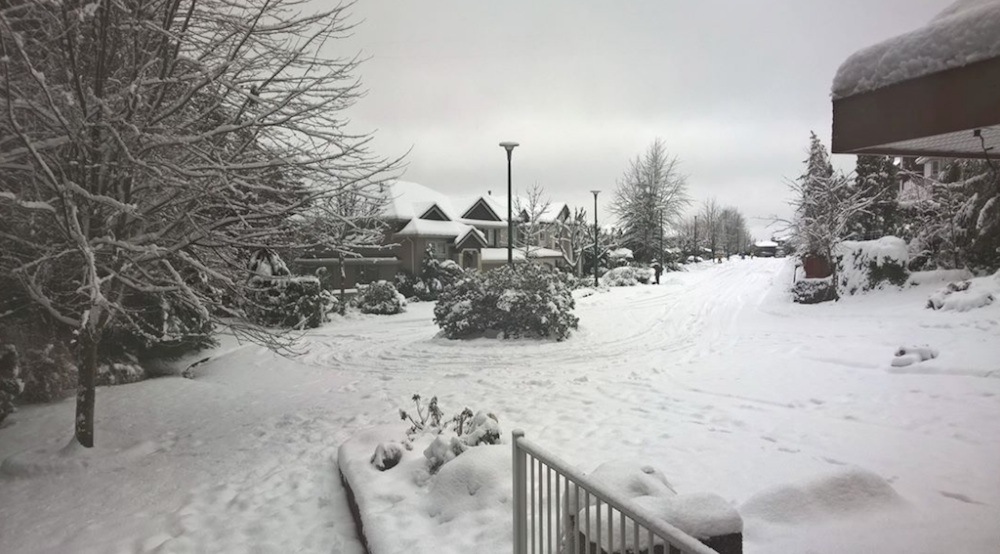 This winter season’s fourth snowfall system in the South Coast of British Columbia could bring blizzard-like conditions to some parts of the region on Boxing Day.

According to Environment Canada, snowfall beginning during the early morning hours of Monday will be accompanied by strong winds later in the afternoon. Southerly winds will peak at 50 to 70 km/hr at areas near the Strait of Georgia.

Between 20 cm to 25 is expected to fall along the corridor from West Vancouver’s Upper Levels Highway to Squamish from Monday morning through Tuesday morning.

For the city of Vancouver and Richmond, and other low-lying areas and areas near the warming influence of sea water, snowfall amounts of between 2 cm and 5 cm can be expected, with higher amounts for higher terrain.

Accumulations will generally be higher for areas in the eastern parts of Metro Vancouver and the western Fraser Valley, where about 10 cm of snow is expected by Monday night. Higher elevations in the inland areas of the region could see up to 20 cm by the end of the day.

“The next Pacific storm will move onto the North Coast tonight and then progress to the south coast on Monday,” reads a special weather advisory. “Moisture associated with this system will combine with the cool air presently over the south coast to produce snowfall over inland locales and higher elevation coastal communities.”

However, snowfall could be short-lasting for low-lying areas by the water, changing into rain late-morning or early-afternoon.

“Precipitation is expected to begin overnight or very early Monday morning. It will begin as snow throughout the south coast. By later Monday morning or early Monday afternoon snow will change to rain over sea level coastal communities, but snow will persist inland and at higher elevations throughout Monday and probably into Monday night.”

At present, the chance of snow continues daily after Tuesday through Thursday.

The City of Vancouver said earlier Sunday that it is preparing for snowfall following Environment Canada’s forecast. Its crews will be working throughout the night with salters and plows to prepare the roads for the anticipated Boxing Day shopping rush tomorrow, and it will be able to add more staff and equipment if necessary.

As well, additional crews are scheduled to begin their shifts early Monday morning, followed by more staff and equipment beginning at 7 am.

There will also be crews out on the streets hand salting roads and sidewalks tomorrow and responding to any requests that are called in through the municipal government’s 3-1-1 hotline.

The City is also reminding property owners and tenants that they are responsible for clearing snow and ice from sidewalks that surround their property by 10 am the morning after a snowfall. Failure to do so, which becomes a safety hazard when the snow turns hard from compaction, can lead to fines of $250.

Anyone who is physically unable to clear their sidewalks on their own can request for help from a City Snow Angel, a group of volunteers who help seniors or people with mobility challenges, by calling 3-1-1.

The last snowfall one week ago on December 19 crippled the city as roads had not been plowed or slated overnight, forcing many to stay at home. Many bus routes were not operational due to icy road conditions, and the Expo and Millennium lines also experienced major delays due to both snow and a police incident.

Even more snow for the mountains

While this forecast could mean trouble for Boxing Day shoppers, it will be a boon for those heading to the slopes. Local ski facilities have already been experiencing one of their best early ski seasons in many years:

Here are the snow forecasts for tomorrow: