Approximately 80,000 customers across the Lower Mainland, including the Fraser Valley, are currently without electricity.

The outages have been escalating throughout the day, with high winds causing tree branches to topple over onto wires. Over in the North Shore, a power station that failed resulted in bright blue explosions that could be seen even in downtown Vancouver. That single incident expanded the outages to another 10,000 customers.

So far, the power outages have been focused within the North Shore, Burnaby, Coquitlam, Port Coquitlam, Port Moody, and municipalities in the South of Fraser, including Surrey, Langley, and Chilliwack.

Within the city of Vancouver, there is an outage in the Downtown Eastside affecting 300 customers and a small outage at the north end of Victoria Drive affecting about five customers. Lights on the Lions Gate Bridge are currently out. 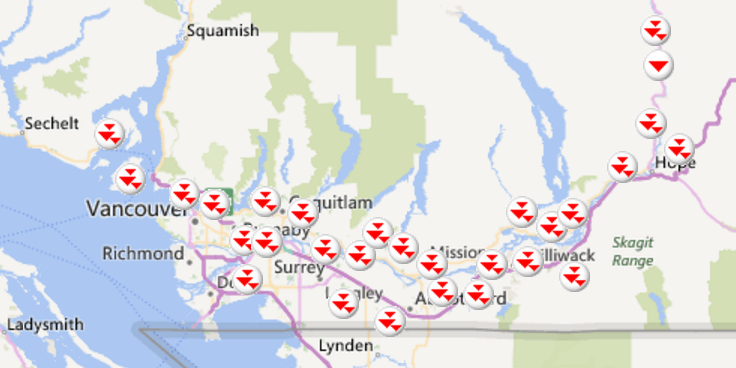 Winds of as high as 120 km/hr have been recorded in some parts of the South Coast. Over at Vancouver International Airport, wind speeds have been sustaining at 60 km/hr.

Within the city in Burrard Inlet, SeaBus ferry services have continued to operate.

The blue light I was lucky to capture in this video is apparently from exploding transformers on the North Shore due to today’s wind storm. #vancouver #vancity #bcstorm A video posted by Kent (@kentology) on Nov 17, 2015 at 6:17pm PST

Our crews are hard at work repairing damage caused by #bcstorm. Here we’re working on lines in the #Abbotsford area. pic.twitter.com/wWBVY829FL