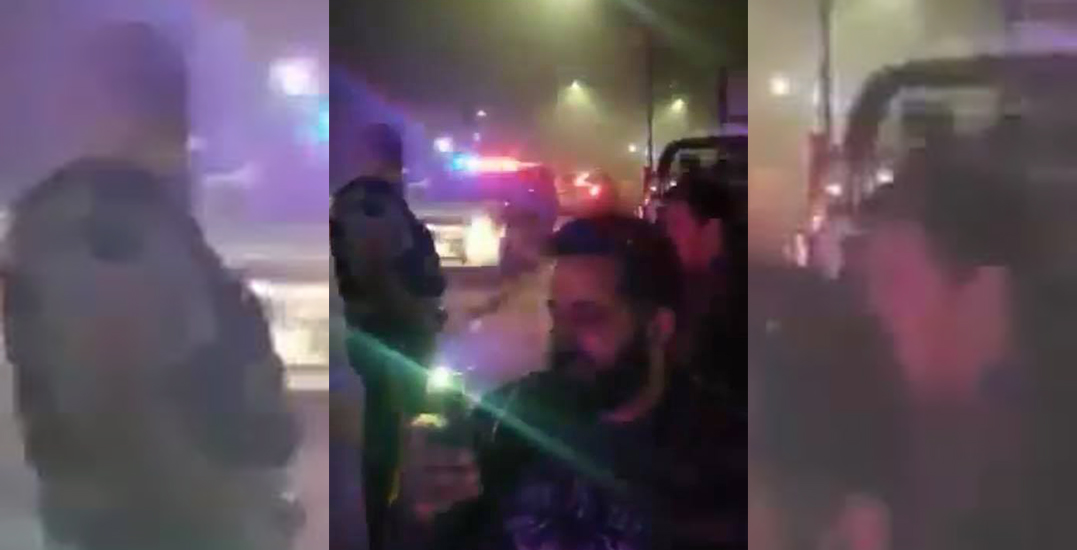 A viral video showing a group of young men hurling insults and profanity at BC RCMP officers is gaining recognition for how the Mounties remained calm and professional under pressure.

Burnaby RCMP say the altercation took place on November 1 after two members on patrol approached a group of 10 men setting off fireworks.

One of the men said that he had a permit but when an officer asked to see it, the man failed to do so and “became verbally abusive,” say RCMP.

The officers called for back up “due to the number of individuals [they] were dealing with.” When the additional officers arrived, they were also met with verbal abuse.

The video shows one of the men filming the officers while slurring his words.

“Pigs, pigs,” shouts a man. “This is f*cking pathetic,” says another. The men continue to argue with the police, yelling profanity-laden insults while mocking them.

“Get the f*ck outta here,” one yells, repetitively. During the altercation, the officers remain calm and eventually leave the scene.

Local journalist and radio host Gurpreet Singh Sahota posted the video on Facebook and it quickly caught the attention of the public.

“Very sad to see the behaviour of our youth towards RCMP. Officers, you were doing your duty. You don’t deserve this attitude. Sorry, you faced it. I apologize. Shame to these big mouths,” wrote Singh on Facebook.

Singh is a founding member of Wake Up Surrey – a grassroots community organization that works to end youth gang violence.

“We learned that there is a problem with our youth is that they are not respectful and they are losing their values,” he said.

Singh said that despite Wake Up Surrey being based in Surrey, he wants the group’s message to spread throughout all Metro Vancouver communities.

The video received hundreds of responses, with many commenters criticizing the behaviour of the men in the video.

“So much disrespect and ignorance. They needed to be taught some respect at home and now someone should show it two them on the streets,” wrote one Facebook user.

“This is disgusting when I first saw this video I just couldn’t even believe it with my own eyes. It made me very angry but at the same time very sad for the people behind the camera. Clearly there [sic] parents didn’t teach them how to respect other people and the law,” said another.

In a statement, Superintendent Chuck McDonald with the Burnaby RCMP said he was “proud” of his officers.

“It’s unfortunate that these individuals felt they could engage with police officers in this manner and I am proud of each and every responding Burnaby member. They were calm and professional in ensuring the issue was resolved safely and did not escalate.”

“The RCMP members in this video resolved this incident and then did what they do every other shift, responded to the next call for service in an equally calm and professional manner.”